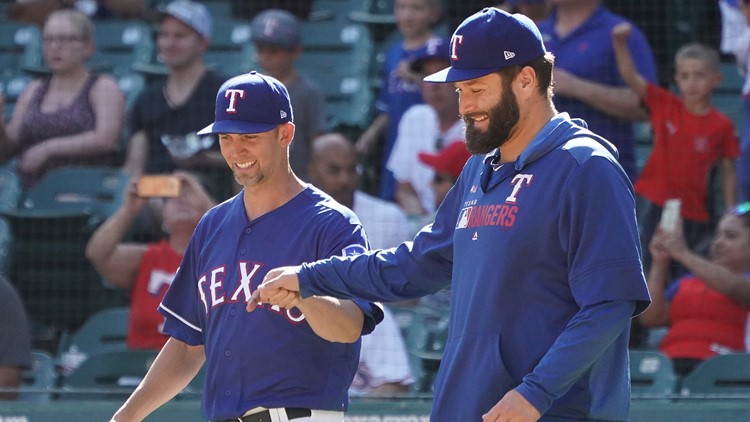 The Texas Rangers are looking to rely on a new-look rotation to help lead them to greater heights in the 2020 season.

Last season, the Rangers were led by a combination of Lance Lynn and Mike Minor and question marks throughout the rest of the rotation. This year, the duo will be joined at the top by the newest Ranger.

Two-time AL Cy Young Award winner Corey Kluber is coming to Texas after he was traded by Cleveland over the offseason.

All three hurlers are expected to be productive mainstays at the top of the rotation, but the question then becomes, which of them will be the ace of the staff?

Lance Lynn joined the Rangers prior to the 2019 season after starting his career in St. Louis with the Cardinals. From 2011-2017 Lynn was a member of a Cardinals club that won a title and he was an All-Star in 2012. Lynn signed with the Twins in 2018 and was traded to the Yankees midway through the season where he had good but not great results.

Lynn is now in the second year of his three-year deal that he signed with Texas last winter. Last season, after years of being a yeoman innings-eating, Lynn turned his game up a notch as he finished fifth in Cy Young Award voting. Overall he pitched 208.1 innings for the Rangers with a 16-11 record and 3.67 ERA and 246 strikeouts.

Last season also marked the third time that Lynn pitched 200+ innings which was the first time since the 2014 season for the Cardinals. His ERA in 2019 was the lowest since the 2017 season and also lower than in the 2012 season which saw him make the All-Star team in the National League.

Lynn is looking to build upon his stellar debut season in Texas where even a modest improvement could mean becoming a legitimate threat in the Cy Young race.

Minor started his professional career with the Atlanta Braves organization that made him the 7th overall selection in the 2009 Major League Baseball Draft after three seasons at Vanderbilt University. In his first season as a Commodore, he was on the staff with fellow pitcher, 2007 1st overall pick, and 2012 Cy Young winner David Price.

After succumbing to injuries as a starter in Atlanta, Minor spent two years in Kansas City as a reliever before coming to Texas prior to the 2018 season with a promise to return to the rotation. This is the final year of Minor’s contract.

After working his way back and becoming a bullpen ace for the Royals, the Rangers made the surprising decision two winters ago to sign Minor as a starter once again. The gamble paid off. He has started 60 games over the last two seasons for Texas. In 2019, his first half performance earned him an All-Star nod.

The Rangers’ big splash of the offseason was bringing in former two-time AL Cy Young Award winner Kluber. The list of accolades for the former Indians’ pitcher is quite extensive. He has finished in the top ten for MVP voting once, won the Cy Young Award twice while finishing in the top ten in voting three other times. Kluber has also been an AL All-Star three times and has pitched in the postseason almost annually for Cleveland.

Now in Texas, Kluber will be looking to regain that magic after an injury-shortened season in 2019. Kluber claims that he will be ready to go for 2020.

The 2019 season was a forgettable one for Kluber as a fractured right arm and abdominal tightness ended his season after only seven starts for Cleveland. Those starts weren’t up to Kluber’s usual standard either but the time off could have helped him recover from nagging back and knee wear and tear and regain the consistent delivery that made him a 20-game winner as recently as 2018.

Kluber was shipped to Texas in return for Delino DeShields and Emmanuel Clase. The hope being that Kluber could bring an elite arm to the top of the rotation and help propel the Rangers back towards the top of the AL West Division.

The projected stats from Baseball Reference are inferring that Kluber might not be 100 percent healthy but all other indications state otherwise. None of Kluber’s injuries from 2019 were structurally impactful. His innings pitched should be much higher as he looks to get back to form in 2020.

By all accounts, if he is truly back and healthy, Kluber should be the Rangers’ ace and the best pitcher on a staff where trying to figure out the best pitcher is finally a good problem to have.

In addition, the Rangers also have depth in their rotation as Kyle Gibson and Jordan Lyles were signed this winter and should be the two that take the back end of the rotation for Texas in 2020 and allow the young pitchers knocking on the door on the farm to take some more time to develop.

Who do you think will top the Rangers’ rotation in 2020? Share your thoughts on the Minor, Lynn, Kluber trio with Patrick on Twitter @PatSportsGuy.