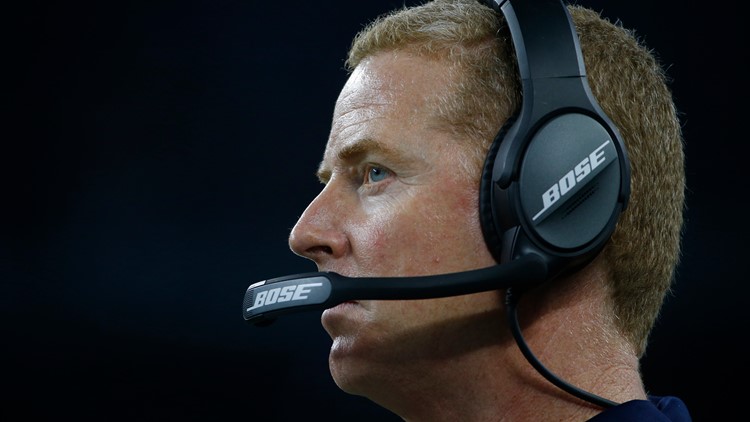 Photo by: AP Photo/Ron Jenkins
Dallas Cowboys head coach Jason Garrett on the sideline during the second half of an NFL football game against Washington in Arlington, Texas, on Dec. 15, 2019.

The long-awaited, oft-deferred move has been anticipated for weeks. It is expected to become official soon.

A fourth 8-8 season in Garrett's 10th year at the helm seems to have been the last straw for owner Jerry Jones. Garrett finishes his career as the Cowboys head coach with an 85-67 record.

Garrett had only two playoff wins -- a 24-20 defeat of the Detroit Lions in 2014, and last year's win over the Seattle Seahawks. He never advanced past the divisional round of the playoffs.

Jones spent the week, following the team's loss to Washington, meeting with Garrett. Many felt it was Jones' way of paying respect to a coach that has been a part of the organization for nearly 30 years, almost from day one of Jones' tenure as owner of the organization.

Jones lit the fuse for this move with his comments after the Cowboys loss in New England, blaming the loss squarely on the coaching staff and questioning the ability of Garrett to coordinate the offense, defense and special teams together into a winning game plan.

It was believed that Garrett needed to get to the NFC Championship Game (at least) in 2019, in order to keep his job in 2020. But the Cowboys loss to the Eagles in Week 16 effectively ended Dallas' season, ruining their chance at a playoff run.

Garrett coached three successive 8-8 seasons at the beginning of his tenure and finishes his final season as the Cowboys head coach with another 8-8 mark. Between then, it was a roller-coaster of success and failure.

In 2014 the Cowboys went 12-4, won the NFC East for the first of three times under Garrett and advanced past the Lions to the infamous "Dez Game" in Green Bay, where Dallas lost 26-21. The following year, injuries to Tony Romo and Dez Bryant ravaged the season, as the Cowboys stumbled their way to a 4-12 mark.

Then, in 2016, the page turned to the Dak Prescott-Zeke Elliott era, as another Romo injury thrust the rookie quarterback into the spotlight, and the Cowboys went 13-3.  But another divisional-round loss to the Packers ended the magical run. In 2017, the Cowboys missed the playoffs with a 9-7 mark, as their rivals the Philadelphia Eagles won the Super Bowl. Then in 2018, another NFC East title, but another loss in the divisional round, this time in Los Angeles.

RELATED: Cowboys Hash Marks: End of an error versus Washington

Garrett began his term as the Cowboys head coach by taking over for the fired Wade Phillips during the 2010 season.

His 85 wins rank second behind Landry as well.