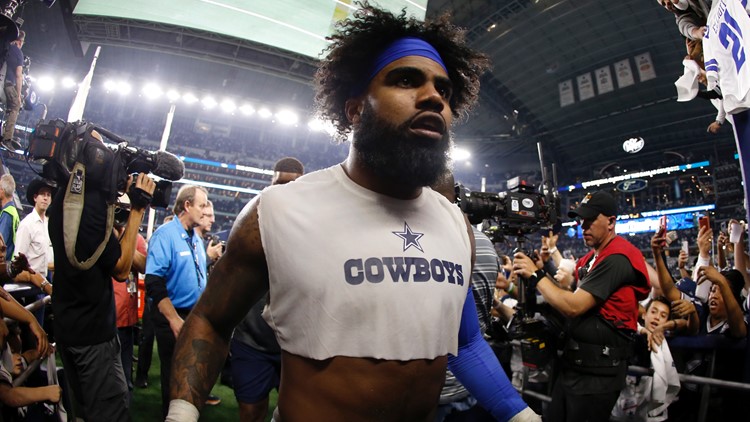 Photo by: AP images
Ezekiel Elliott did not violate the NFL personal conduct policy during an incident in May at a Las Vegas music festival, the NFL investigation found.

The Dallas Cowboys running back met with NFL commissioner Roger Goodell this week and apologized for his behavior during an altercation at a music festival in May.
Author: WFAA Staff
Published: 1:41 PM CDT July 3, 2019
Updated: 1:44 PM CDT July 3, 2019

Dallas Cowboys running back Ezekiel Elliott won't face any punishment for a confrontation with a security guard in May at a Las Vegas music festival.

Elliott met with NFL commissioner Roger Goodell on Tuesday to discuss what happened. The football star tweeted after the meeting that he failed to live up to "the high standards that are expected of me."

TMZ Sports obtained a video of Elliott getting into a confrontation with a security guard shortly after 3 a.m.

Goodell found there was no violation of the NFL's personal conduct policy, NFL officials said Wednesday.

The commissioner "met with Mr. Elliott to reinforce the standards of conduct expected of him and the consequences for failing to meet those standards," the NFL statement said.

Elliott received a six-game suspension in 2017 in response to allegations of domestic violence made by his ex-girlfriend.

The player was not arrested nor charged in connection with the accusations.