Dak Prescott is looking forward to learning tricks of the trade from new quarterbacks coach, former Cowboys' QB Jon Kitna, after learning from two NFL starters in the past 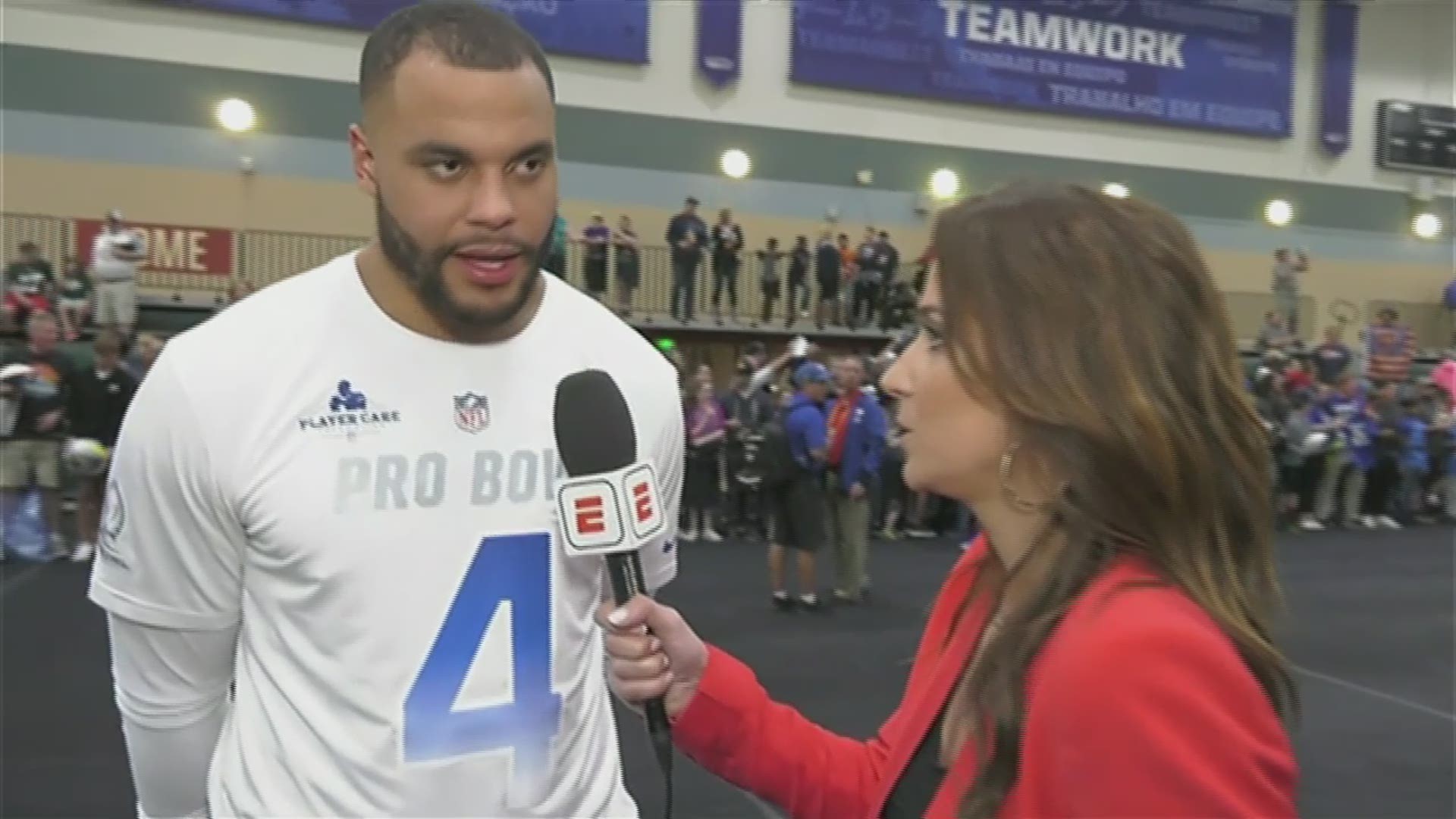 Kitna, who succeeds Moore as quarterbacks coach with the latter's elevation to offensive coordinator, is just one of the benefits Prescott sees as organized team activities kickoff this week. What Prescott gains most from having been in the tutelage of former NFL quarterbacks is their knowledge is experience based, not theoretical.

"The benefit is... they're guys who have done it," Prescott said at his ProCamps women's clinic at the Ford Center at The Star Sunday. "They've been in the league and have done it. They've been in there games by games, have been able to learn from playing experience. You have something like that, it's much better than the guy that is just speaking off of what he thinks or maybe he learned from one guy to another. But they're speaking from game experience themselves."

The late Wilson was Prescott's quarterbacks coach from 2016-17. Wilson played in the NFL from 1981-98 with the Minnesota Vikings, Atlanta Falcons, New Orleans Saints, Dallas Cowboys, and Oakland Raiders, compiling a career record of 36-33. Wilson was a backup for Dallas from 1995-97, and a reserve player that starting quarterback Troy Aikman saw as an unofficial quarterbacks coach.

RELATED: Offensive coordinator will be a collaborative process for Kellen Moore

Moore was Prescott's second quarterbacks coach for just the 2018 season. Even though Moore played in a total of three games in his three seasons with the Detroit Lions and three seasons with Dallas, the former Boise State signal caller started two games in 2015 for the Cowboys that proved he had the intelligence to play the game, but maybe not the physical gifts.

"Having a guy like Kellen that maybe didn't have all the tools, but had it mentally and it gave himself a great career in the league, and now to have a guy like Kitna that had a little bit of both," Prescott said.

What Kitna brings to Prescott's toolbox is an emphasis on footwork.

Said Prescott: "So assertive in what he wants to do in his footwork in everything that he's teaching."

Kitna produced a 50-74 record in his 14-year career with the Seattle Seahawks, Cincinnati Bengals, Detroit Lions, and Dallas Cowboys.

Ultimately, Prescott realizes that he has had three unique ex-quarterbacks as his position coach and hopes to recognize each for their contributions to his composite game.

"I'm thankful honestly for all three of them and, at the end of my career, I can look back and thank them all for one thing or another," said Prescott. "I'm proud of that."

Last year, Prescott led the Cowboys to a 10-6 record and their third NFC East title under coach Jason Garrett. However, the 2016 fourth-round pick had an inconsistent season as a passer, some of which was due to his footwork.

Kitna's teaching will be especially valuable to both the Cowboys and Prescott as the former Mississippi State Bulldog enters the final season of his contract. No doubt Dallas already seeks a long-term deal, but Prescott's performance will dictate how much and for how long his contract will be.

Do you think that the Cowboys will work out an extension for Dak Prescott before the 2019 season? Set your dollar amount and send it to Mark on Twitter @therealmarklane.