The latest from Dallas Cowboys training camp in Oxnard, California. 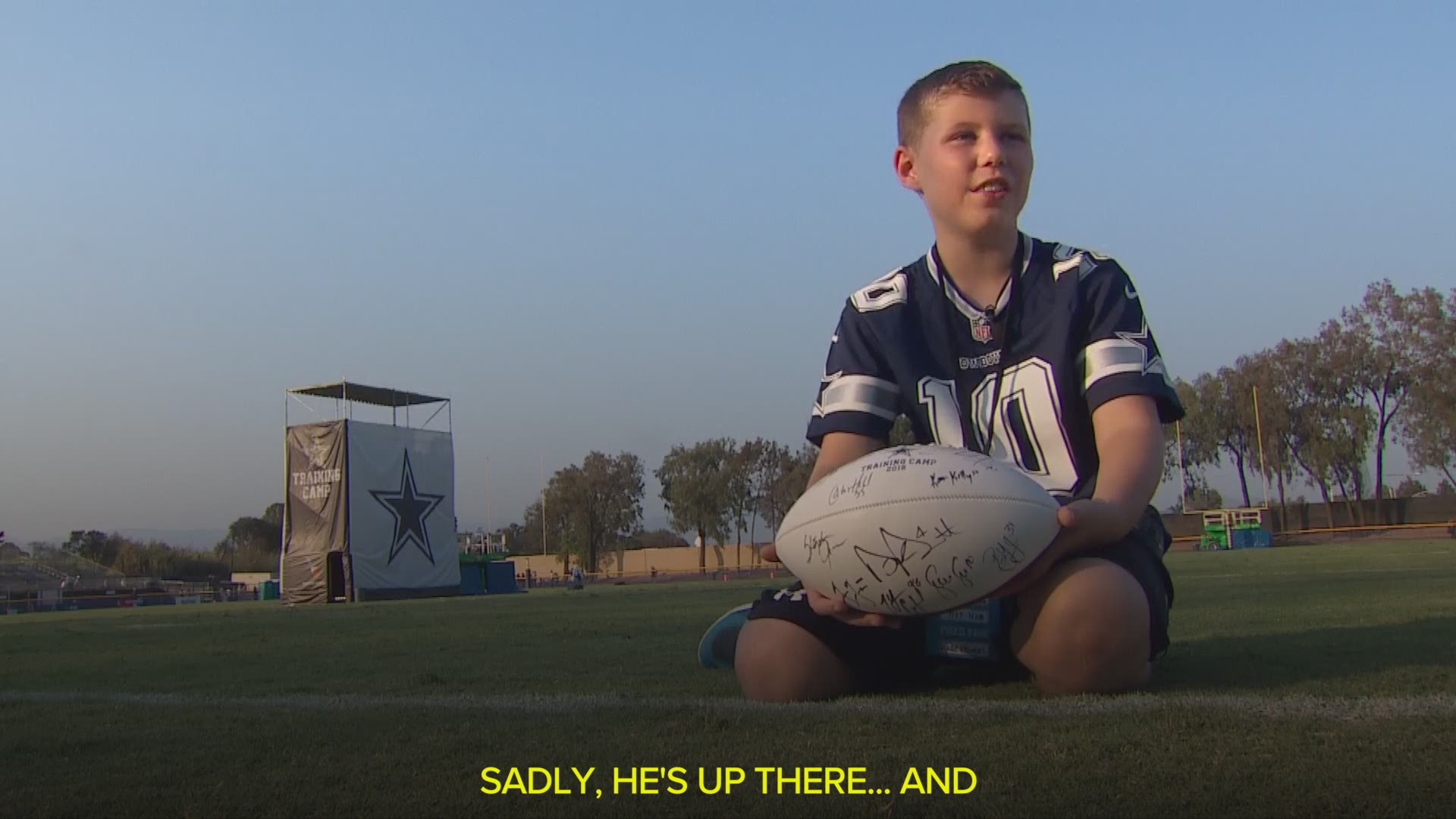 OXNARD, Calif. – Training camp 2018 is officially underway in southern California, where we'll begin to answer the offseason's questions and think up many more.

WFAA Sports will be in Oxnard throughout the Cowboys' three weeks here, bringing updates here and on social media.

The passing game is struggling

Dak Prescott has completed 67 of 93 passes with three touchdowns and four interceptions in team and seven on seven so far in training camp, according to Clarence Hill of the Star-Telegram.

Two of the INTs came on Sunday, including a Pick-6 by cornerback Anthony Brown.

None of the three touchdowns – which all came on Sunday – have been to a wide receiver. Running back Rod Smith caught on in seven-on-seven, and Ezekiel Elliott and tight end Geoff Swaim hauled in TDs in team practice.

Prescott said the Cowboys still have a long way to go but he is not worried.

“We definitely made some improvement,” Prescott said. ”We are getting better. If we can continue to do that we will get to where we need to be.”

Read the full story from the Star-Telegram

Dak stands by his anthem comments 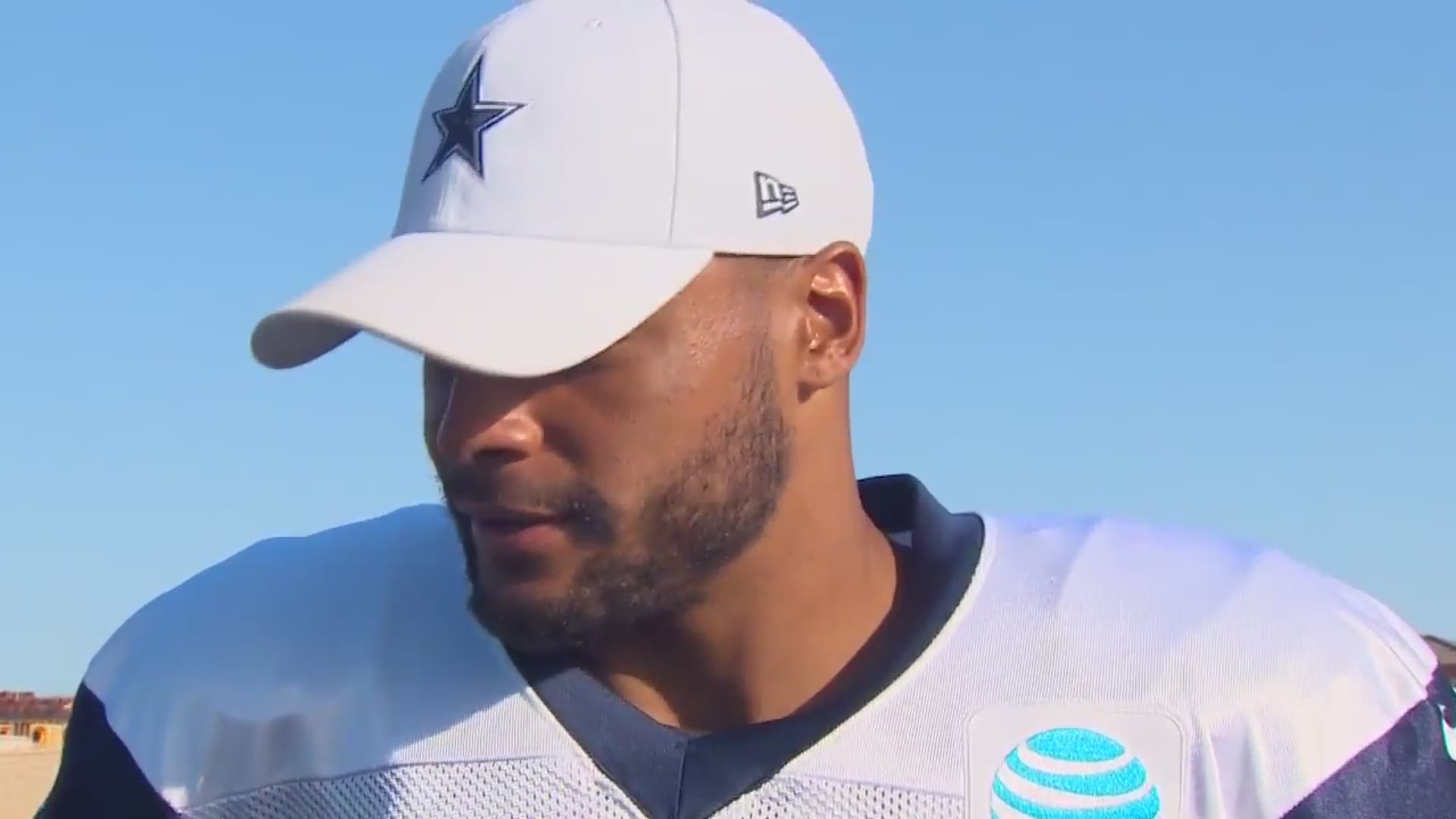 Dak Prescott reiterated his stance on player protests during the national anthem, saying that those who were upset by his comments may have "misunderstood" him.

"I made my statements. I stand by what I said," Prescott said. "Some people might have misunderstood or whatever, but I know what I said, and I feel strongly about what I said. It is what it is."

The third-year QB added that he "knew there would be backlash" to the comments.

Sunday marked the closest thing to real football we've seen at camp, the Blue and White scrimmage. It's a no-tackle scrimmage that features starters and roster longshots alike.

One of the highlights was a long touchdown strike from backup QB Cooper Rush to Cowboy newcomer Tavon Austin.

Rush to Tavon for the TD. pic.twitter.com/oHm2jnBUWJ

Austin also flashed his agility – the five-year veteran's bread and butter – on a screen play from Dak Prescott.

Check out photos from the scrimmage here.

The memorabilia king at camp!

He's studied enough photos of Ezekiel Elliott to make an exact replica of the running back's helmet. He's got an in with the Cowboys team warehouse in Texas. And you won't find a more dedicated fan.

What better way to enjoy an off day than with the collector king in Oxnard? Michael Perez, a memorabilia collector from the northern California city of Foresthill, brought an impressive bounty to his first training camp. Check out the story here. 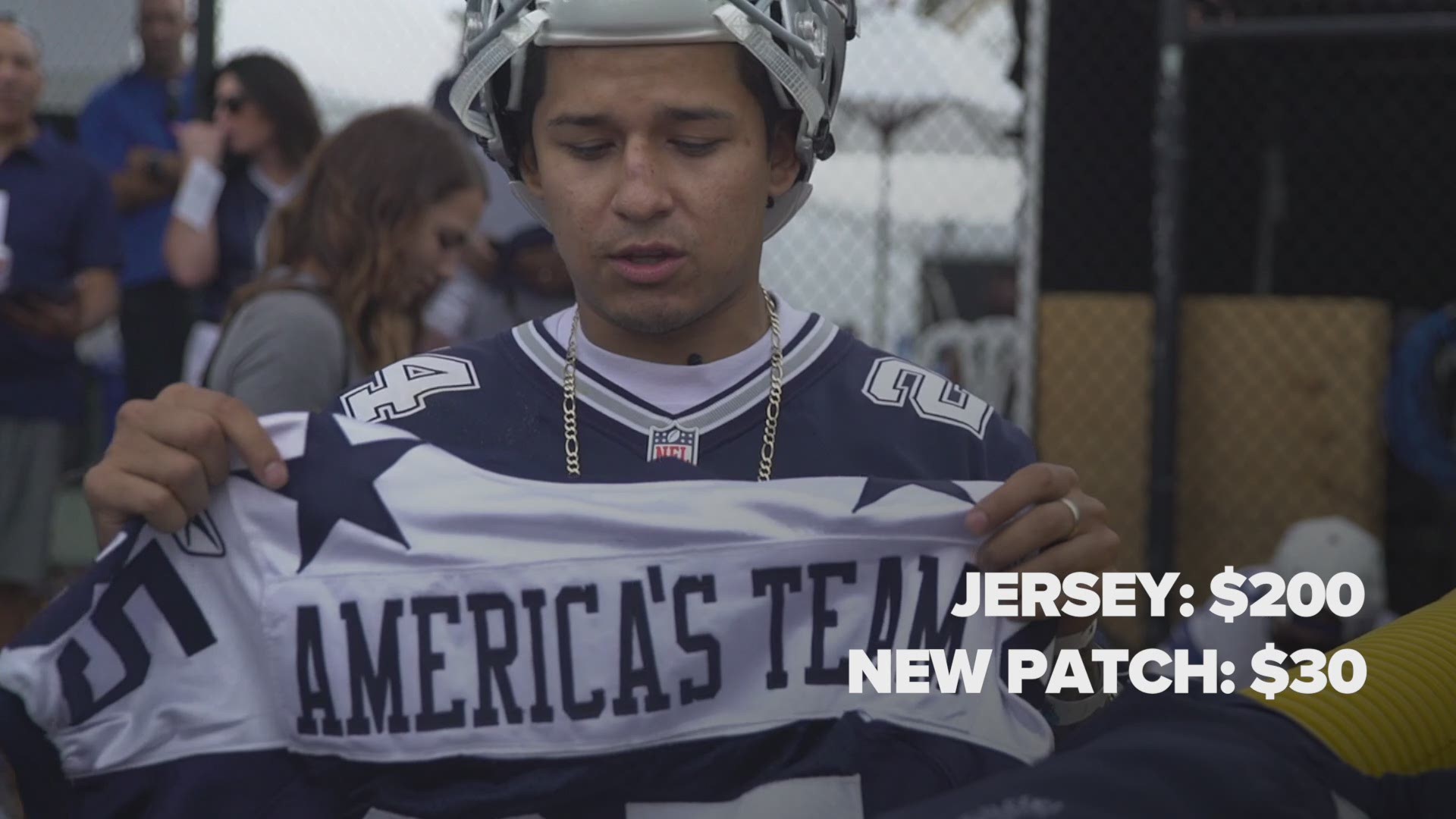 The Cowboys are off on Friday, their second off day of camp.

Hansen goes 1-on-1 with Dak Prescott

ESPN public relations rep Bill Hofheimer dug back into the archives for a classic TBT post Thursday. Three years ago, TV analyst Jon Gruden was at Cowboys camp interviewing Tony Romo and Jason Witten about the upcoming season after a 12-4 run in 2014.

Today, Gruden is back on the field coaching the Raiders, and it's Jason Witten who took over Gruden's job on the Monday Night Football broadcast. A year earlier, Romo stepped into the top broadcast team at CBS.

#TBT: Three years ago today, Jon Gruden interviews @JasonWitten and @tonyromo at #Cowboys camp. Now it's Witten and Romo who are top NFL game analysts while Gruden is back on the sidelines in Oakland. pic.twitter.com/tKpMDsZz0a

"It feels good to get back out here!"@Kay_BlackSimba provides an update on his health as he was back practicing at #CowboysCamp today.

That and so many more questions for Tyrone Crawford in Joe Trahan's "one-minute drill."

Randy Gregory is back

Defensive end Randy Gregory takes the next step in his comeback from his year-long suspension.

For the first time in camp, Gregory joined the defensive unit in the morning walkthrough. The plan is for him to do that several more times with no timetable yet on when he'll join the afternoon workouts.

#Cowboys DE Randy Gregory is off the non football injury list and on the active roster. Back in this morning’s walk-through.#WFAACowboys pic.twitter.com/UxG7SkC6xq

Michael Gallup is the biggest unknown on the Cowboys' receiving corps, and thus one of the biggest attention-grabbers in Oxnard. He and Dak Prescott are already working on their connection and getting fans pumped up.

Gallup into your grill. pic.twitter.com/mYWrfwepf9

It can be hard to stand out among the throngs of media members on hand to get the latest from the Cowboys in Oxnard. But reporters from German TV network Pro 7 had no trouble garnering attention.

They arrived at camp decked out in lederhosen to help fuel interaction with players and coaches. 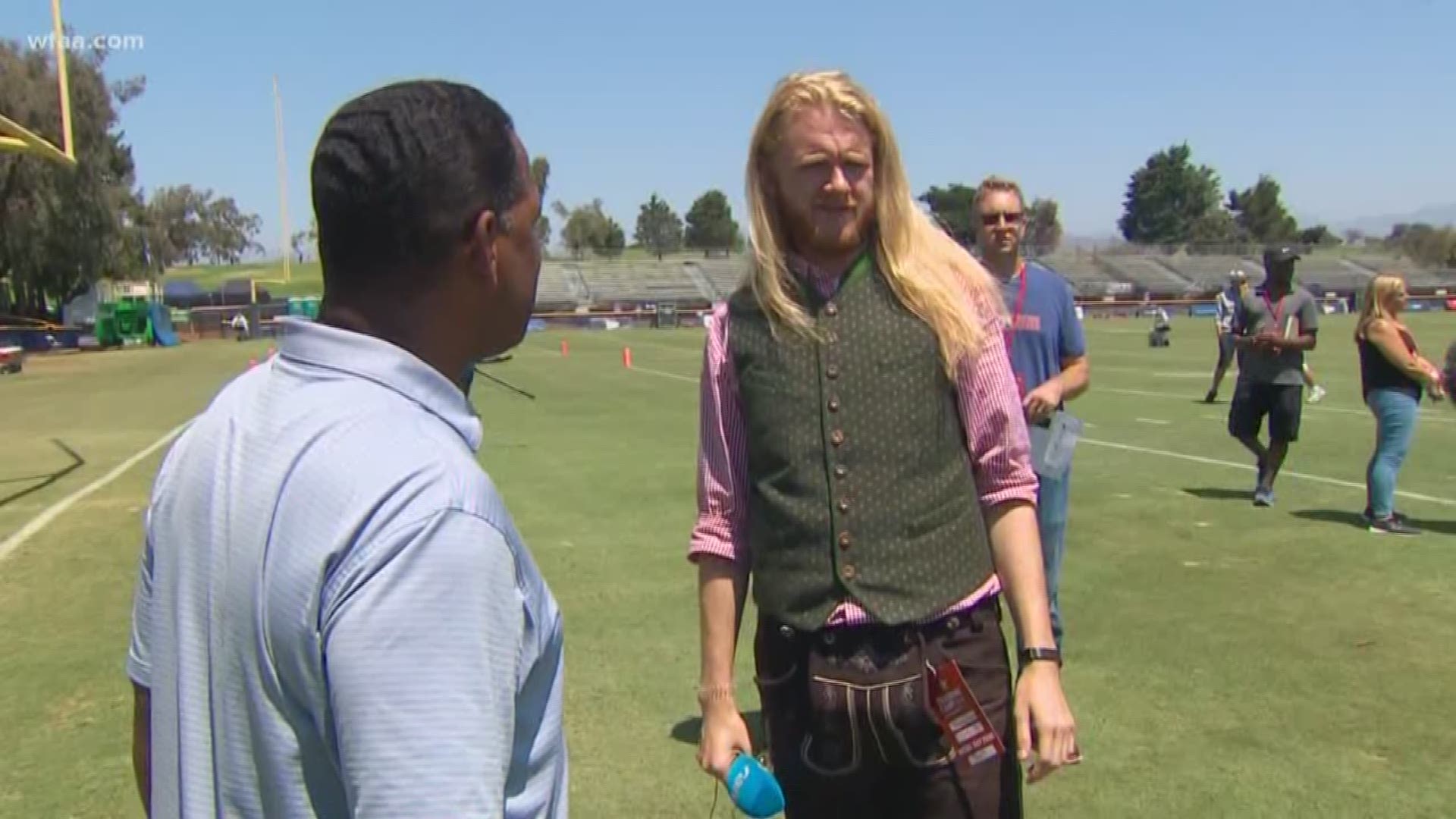 The Cowboys had their first off day on Monday – after just two practices in pads – so we took our "office" to Ventura Harbor Village to talk about camp and Dale's conversation with Jerry Jones.

Dale Hansen's commentary on Jerry Jones' national anthem policy – and the fact that domestic violence and drug use don't get the same hard-line stance from the billionaire owner – went viral Monday. It was viewed more than 2.6 MILLION times on Facebook alone. 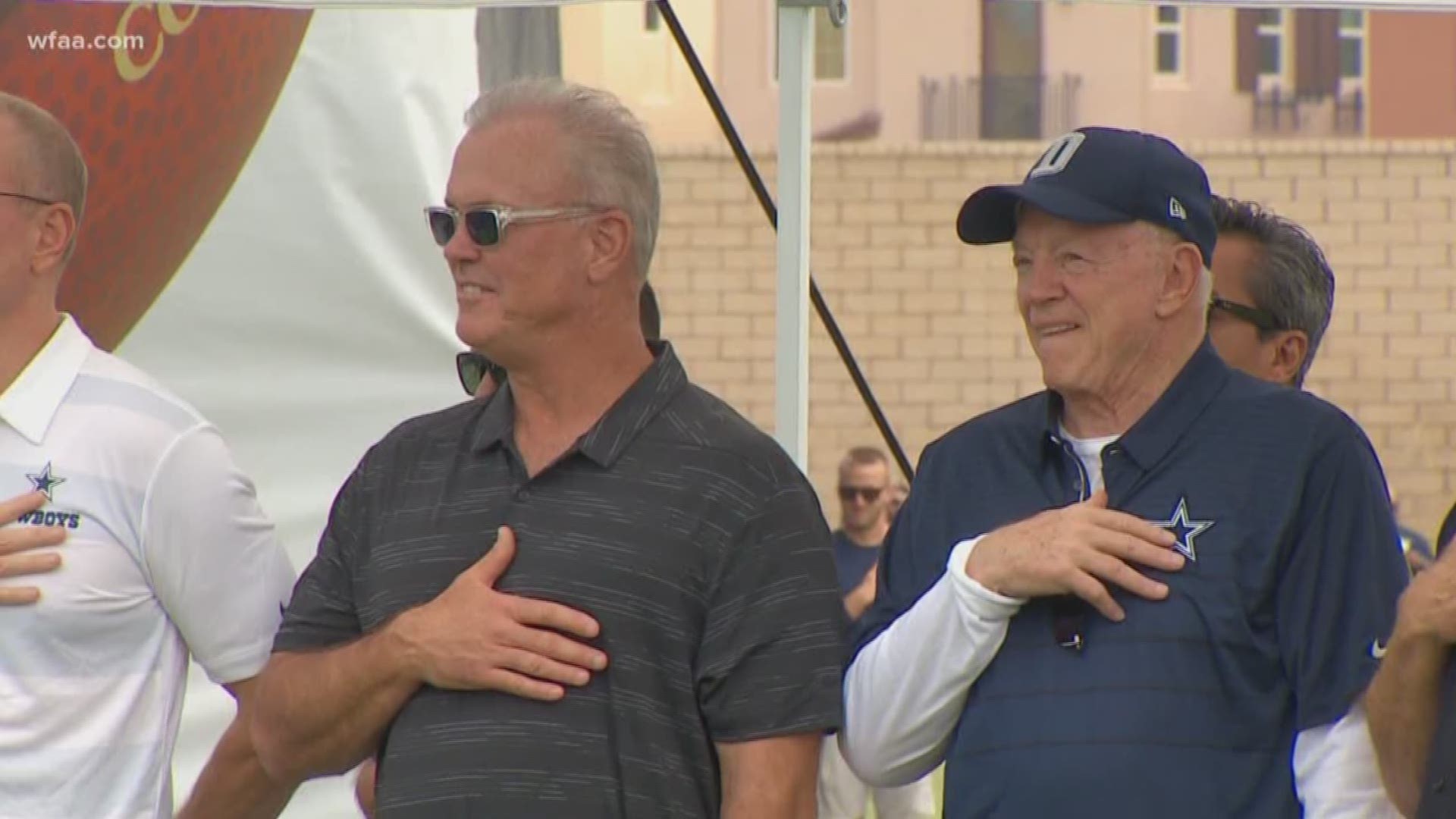 The topic of the national anthem was off limits at the request of the NFL... or at least that's what the Cowboys PR team told us. But Jerry faced other tough questions from WFAA's Dale Hansen. 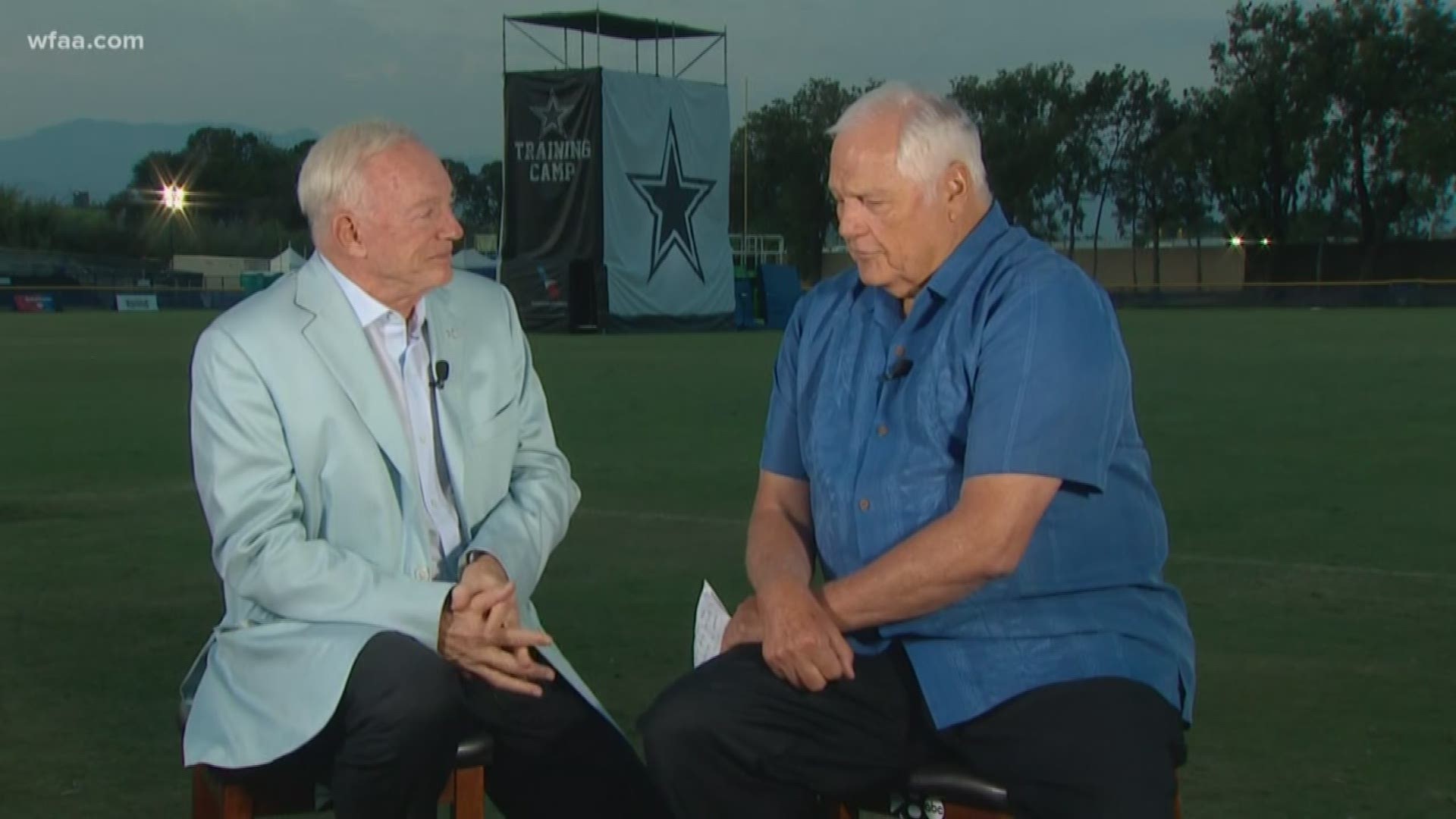 Happy 25th birthday to quarterback Dak Prescott! The crowd serenaded the QB on his way onto the practice field on his birthday.

Watch the video in the player below or by going here. 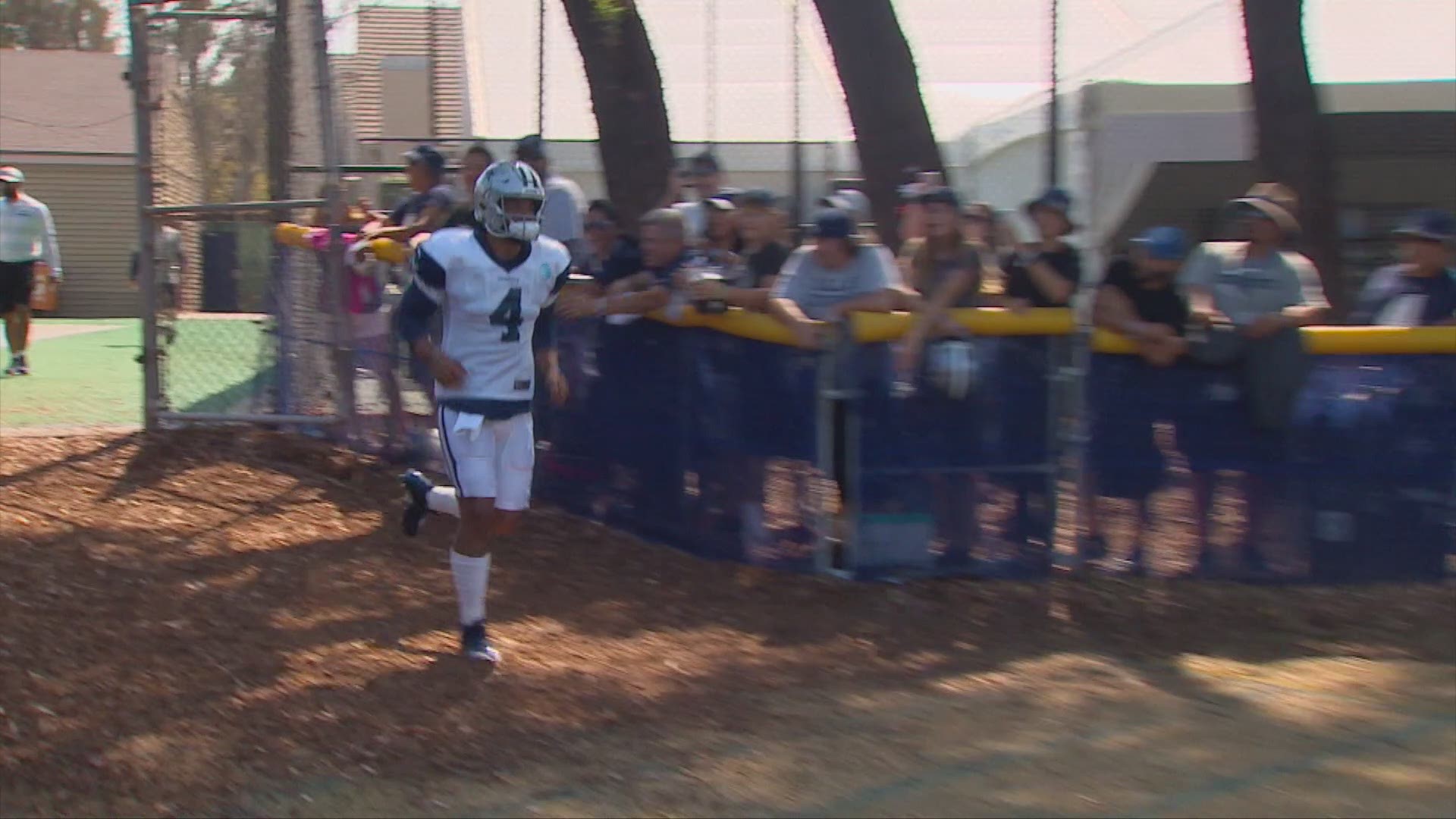 When the Cowboys put on the pads for the first time Saturday you could just see the intensity ramp up significantly. Especially when it came time for the pass rush drill.

After his press conference Sunday, head coach Jason Garrett shared why that drill is his favorite.

It's a simple drill: an offensive and defensive lineman take their stance with an imaginary quarterback in the pocket. When the ball is snapped, it's on. Consider it grown man football, and in Saturday's practice Travis Frederick gave a great example, body slamming defensive tackle Brian Price.

It's a great diagnostic tool for coaches, too. It's an opportunity to see how players handle the pressure when the spotlight is directly on them. 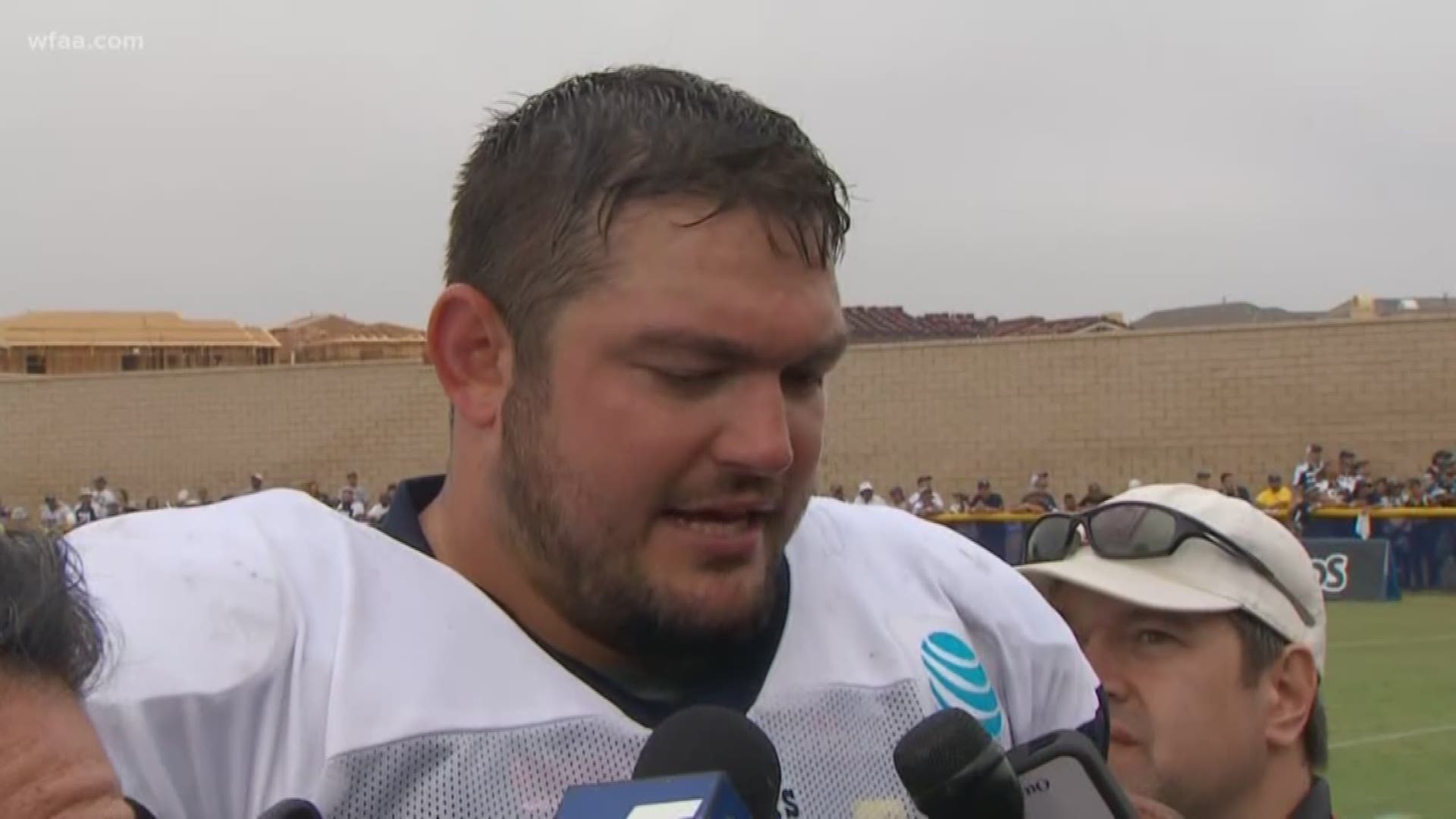 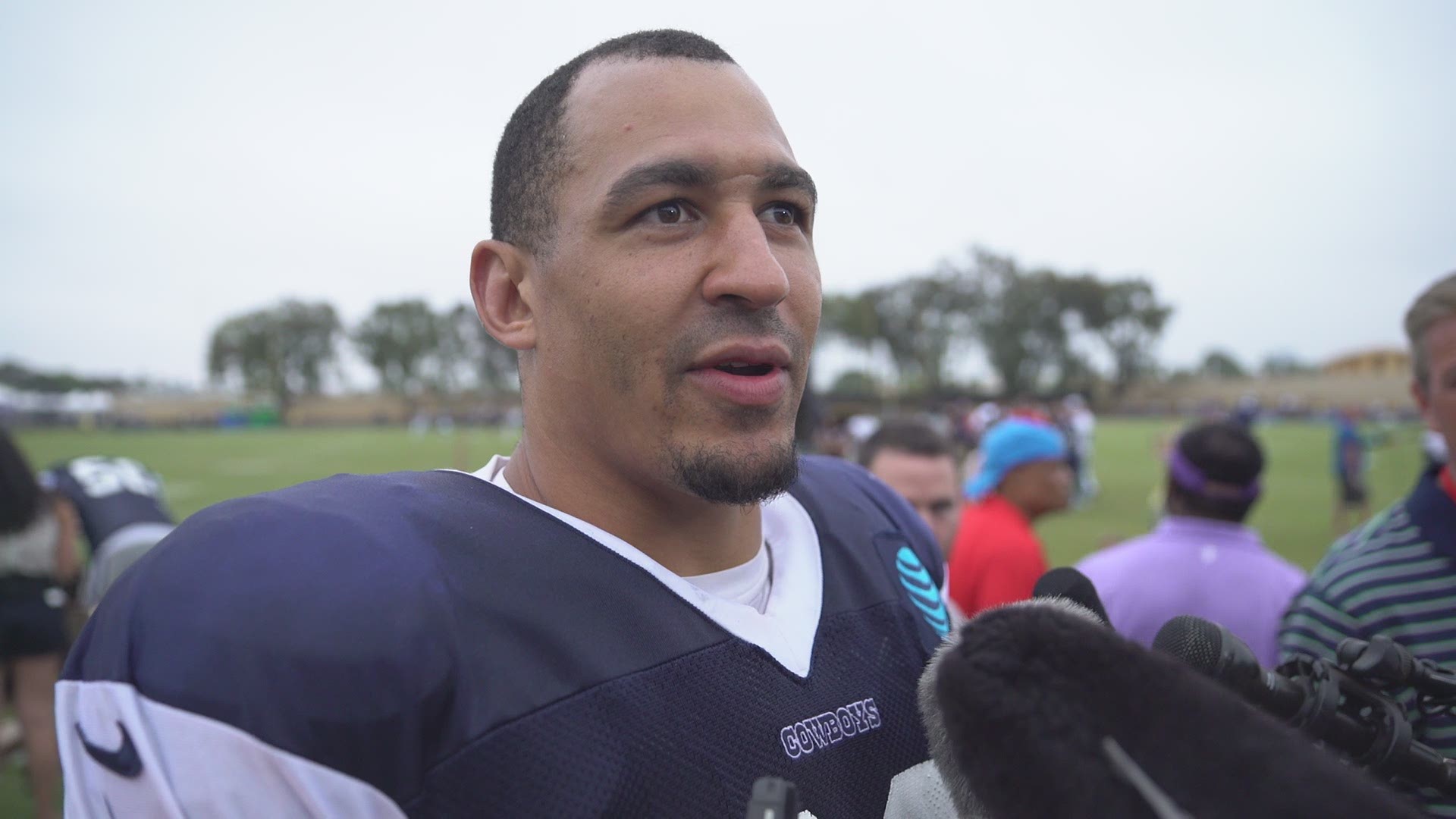 Defensive end Tyrone Crawford weighed in on his exchange with the EA Sports Madden video game ahead of camp.

The video game version of Crawford looked like he's spent the offseason drinking milkshakes and sitting on the couch – Crawford estimated they had him about 42 pounds heavier than he really is.

YO @EAMaddenNFL we need to have a talk. This is unacceptable. Forget my stats. What’s up with the photo? Who on your staff felt it ok to make my body look like humpty-dumpty? 😡😡I DEMAND A REVIEW! pic.twitter.com/WgL3sMjlvi

If you didn't catch the action and only listened to reaction from the crowd and the players about halfway through practice, you'd have thought the Cowboys won the Super Bowl... But it was just Byron Jones hauling in an interception.

When a tackling dummy messes up your shot of @Byron31Jump's interception during the first padded practice...

Jones is transitioning to cornerback this year after playing primarily safety in his first three seasons with the Cowboys.

The Cowboys, no strangers to grandeur, held their official "opening ceremony" of training camp Saturday – where thousands pour into the River Ridge complex in their Cowboys garb to listen to Jerry Jones talk for 10 minutes and watch the cheerleaders perform publicly for the first time of this season.

The light in me recognizes the light ... in the Dallas Cowboys? The team is using yoga as a means of preparing for football action in training camp. 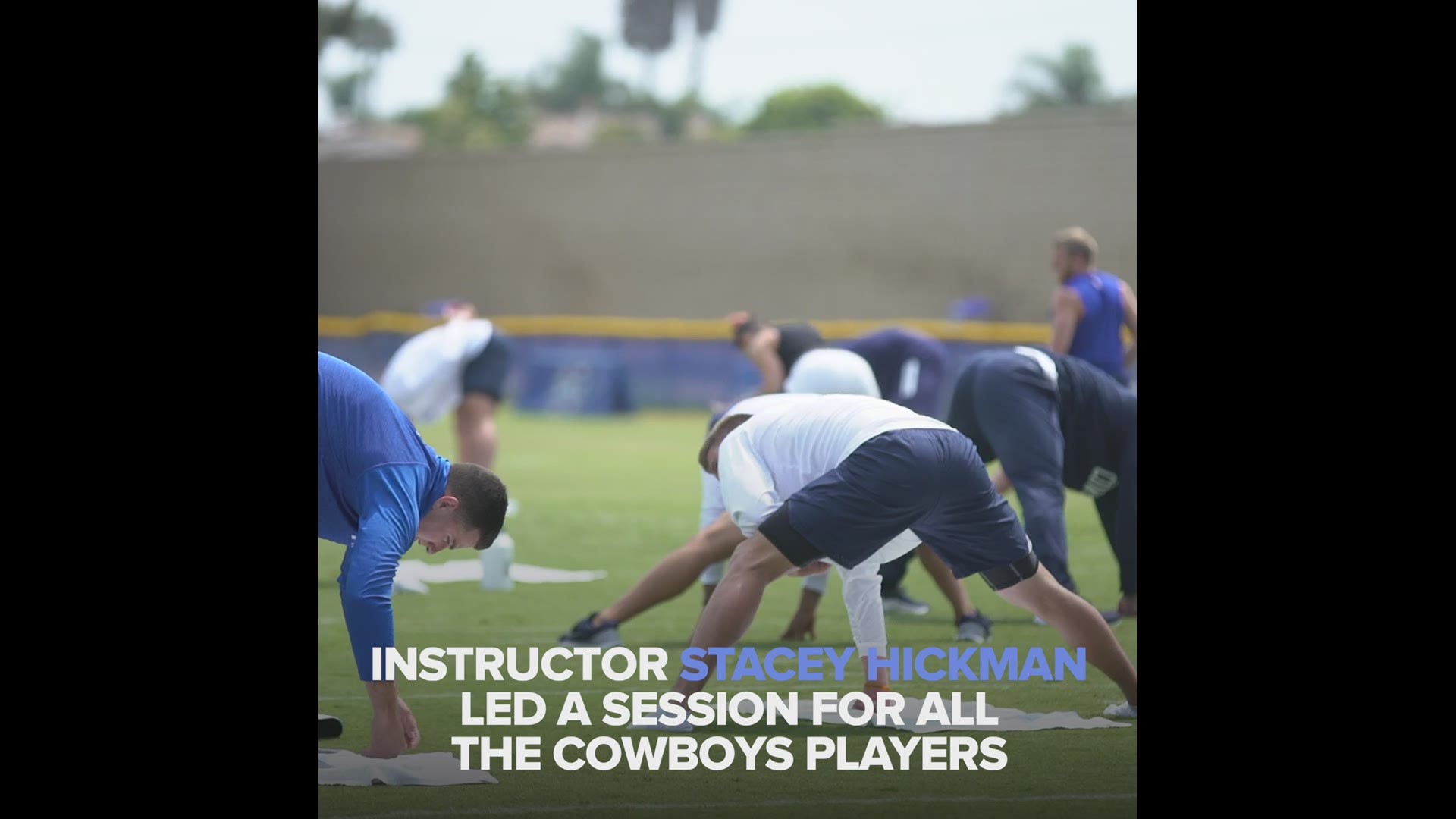 Some of our favorite fans

It was determined yesterday that today would be "Dak Day" in Oxnard, meaning the starting quarterback would address the media after the morning walk-through practice.

And Prescott delivered the headline with his strongest statement on the national anthem topic to date:

"I'd never protest during the anthem and don't think that's the right time or place to do so," he said.

Prescott acknowledged the existence of social issues in our country, and said he respects other players' decision to protest, but that he thinks it's time "for action, not just kneeling."

READ: Dak Prescott: Anthem 'not the time or venue' for protest 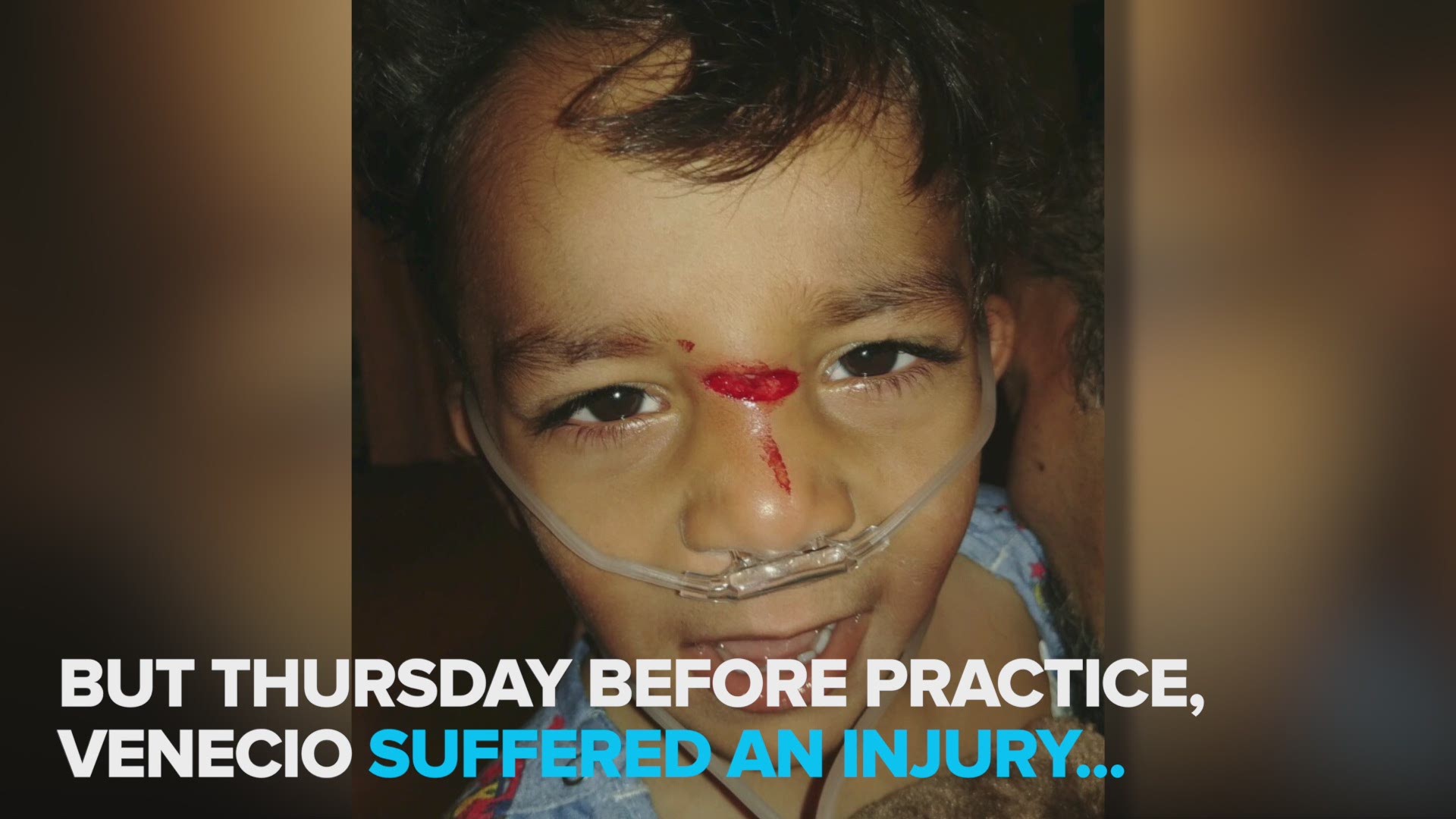 Checking in from Oxnard

This 3-year-old Cowboys fan didn't let 15 stitches in his nose stop him from cheering on his favorite team.

Venicio Camarena fell and gashed his nose in the parking lot before Thursday's opening practice, but he couldn't stand to miss more than a few hours of the fun. And when the Cowboys found out, he and his family were in for quite a surprise.

Photos: New Cowboys are a hit with the fans

New Cowboys a hit with the fans

Newly-acquired Cowboys were a hit with fans after the first training camp practice, signing autographs and taking pictures with the throngs of Cowboys faithful in Oxnard. 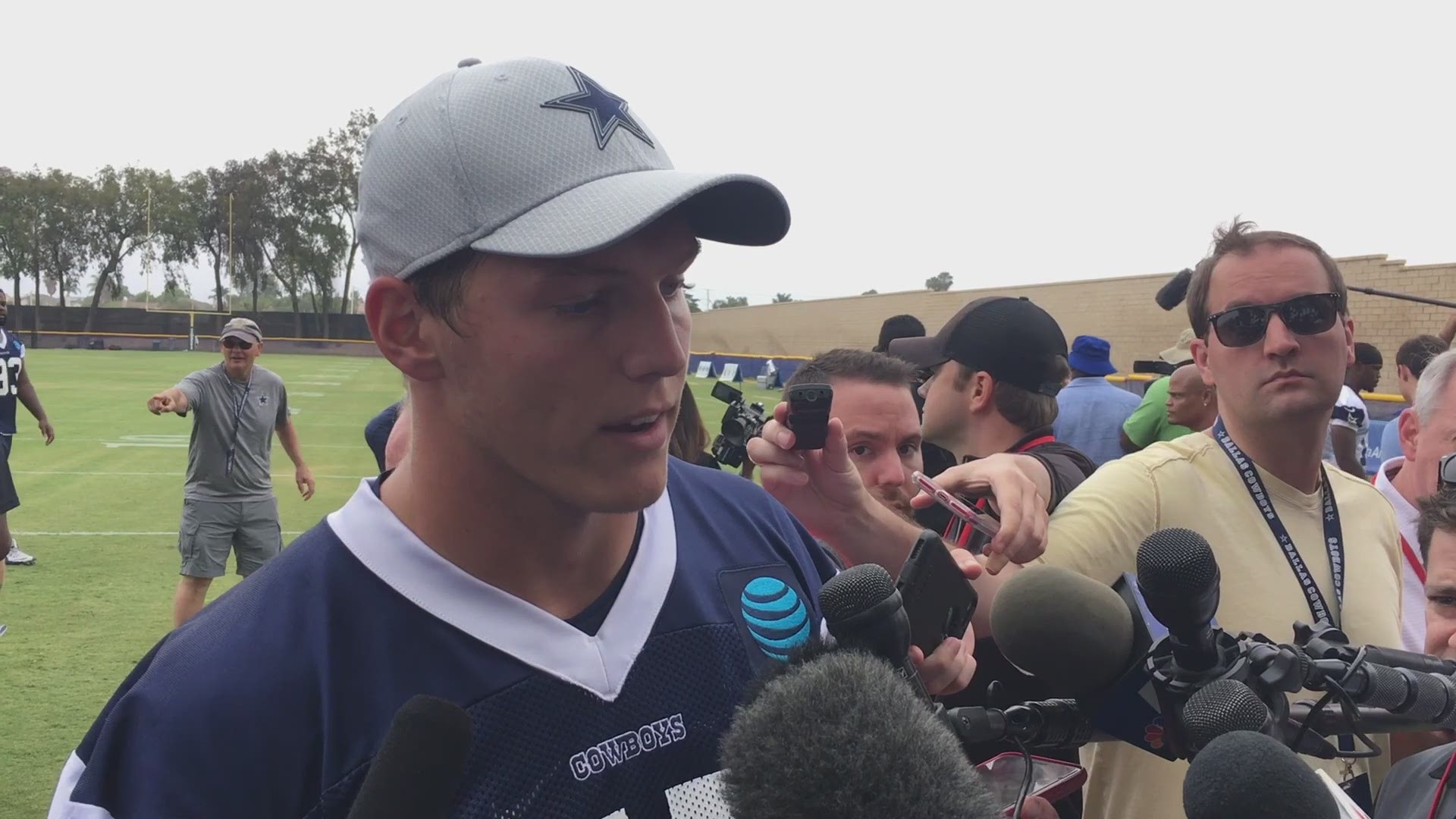 The Cowboys' top draft pick says he's "100 percent" at the start of camp after missing last month's minicamp due to an ankle injury.

Holding him out of practice was a "just a precaution." 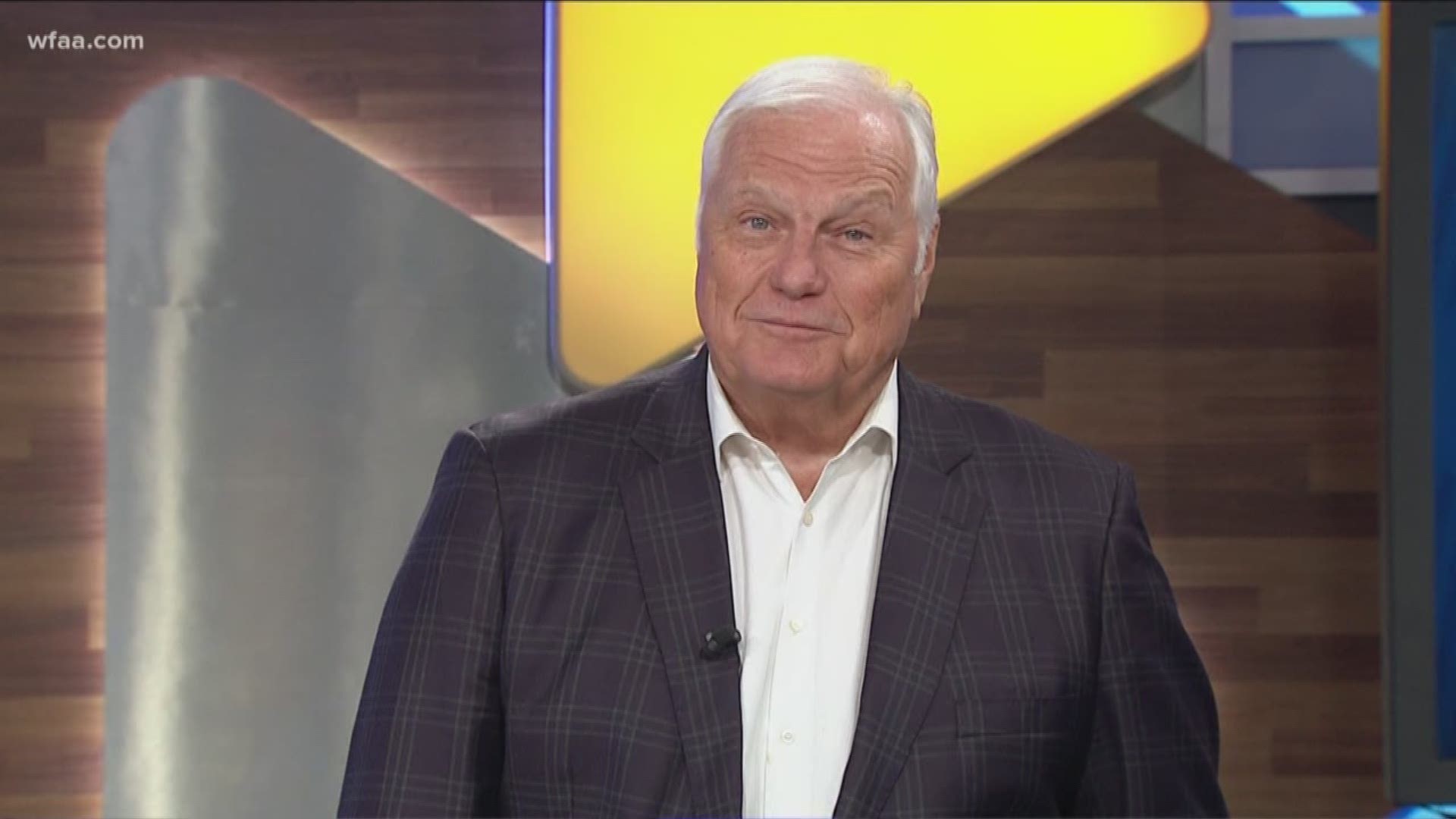 "I'm ready to go, 100 percent," he said. "Ready to start running around and practicing."

"You're always rehabbing, even with light stuff. You're gonna rehab bumps and bruises."

First practice of the 2018 season

"I feel a lot better at this point this year than I did at this point last year," he said. "I feel excited. It's almost coming to camp for the first time. There's so many new faces, it's kind of like the first day of school."

Cowboys owner Jerry Jones once again made his stance clear on player protests during the national anthem, the week after the NFL pressed pause on a policy that would require players to stand for the anthem but allow them the opportunity to remain in the locker room.

Jones said he wouldn't support a player who stayed in the locker room during the anthem.

"Our policy is you stand for the anthem, toe on the line," he said in Wednesday's opening press conference.

The league's policy announced in May would've given teams the freedom to discipline individual players for their actions during the anthem. The league gave itself the discretion to fine teams based on the actions of their players.

READ: Jones: Cowboys will stand for the anthem, won't distance themselves from Papa John's