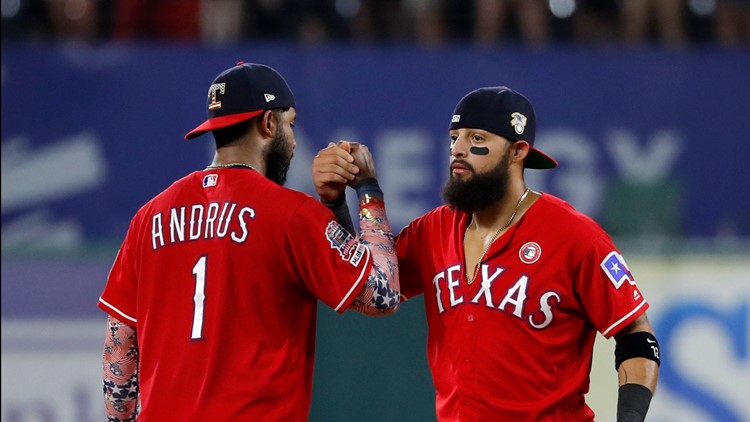 First half from Rangers offers hope for interesting baseball

DALLAS — At the end of The Empire Strikes Back, there is a conflicting sense of hope and doubt, both overshadowed by the idea that there’s a break. Is it better to be hopeful or doubtful about the future? Can our heroes save Han and still win against the Empire? Of course they can – they’re still alive, know a little more about their enemy and besides, they’re on the side of good. But the great thing about a break is that it gives our heroes a chance to collect themselves, strategize, reorganize and figure out the best course of action.

Is that a little dramatic for the 2019 Texas Rangers? Maybe. The Rangers put up a fantastic fight through the first half of the season – far greater and in a far better place than most likely imagined. As they entered the final month of the ceremonial first half, though, some of their greater flaws were exposed – namely, the inexperienced and untested rotation and their play against legitimate playoff contenders.

RELATED: Rangers survive schedule, come out other side still in contention

The good thing is that the Rangers beat the teams that should be beaten. The bad news, of course, is that the better teams beat them when they needed to. The final four series read just as one might think when looking at the matchups on paper.

One of the most painful things to watch during this stumble towards the first half finish line was the disappearance of the offense. Texas had a nine-run game, a six-run game, and nothing else over this stretch over five runs. Even though they got Joey Gallo back, the man can only do so much.

The team seems to miss Hunter Pence a little more than originally thought. Having a .294 bat absent from the middle of the lineup, especially when the current placeholder is just a shade over .250 can have a detrimental effect on a lineup.

But it’s not just missing that raw bat in the lineup. As a team, the Rangers slashed .234/.289/.411. In the previous 14 games, Texas was hitting only slightly better, but the on-base percentage was much higher, at .326. There are a couple of reasons behind this – the team faced better pitching over the final 13 games of the first half, and, coming towards the end of the stretch, their approach changed and got less patient. Could Pence’s influence and patience, good for a .353 OBP, infuse some support for the lineup? Absolutely.

It’s not all doom and gloom for the offense, though. We’ve seen Rougned Odor seemingly turn that annual corner. While he was only used for 10 of the 13 games, his slash line over that time implies that he’s getting better contact when he hits the ball; with zero walks over that time though (for someone who has shown improvement in that area in previous years), that could stand to change.

Joey Gallo’s return brought some power to the lineup, but I think his numbers get augmented with the return of Pence to the 4-hole. Assuming Pence’s production remains the same when he gets back, Mazara can slide back up to the 3-spot, Andrus to 2 and Gallo can stay at 5 with a hitter who gets on base at a better clip in front of him.

One of the bigger flaws that was exposed as the Rangers pitched against winning teams was the lack of sustainable depth in the rotation. The reason critics can say Texas has overachieved so far is because they’ve been able to MacGyver their 3-5 spots in the rotation behind Mike Minor and Lance Lynn.

After designating both Drew Smyly and Shelby Miller for assignment and having forced Jesse Chavez out of a fireman role in the bullpen to salve the rotation, this stretch of four series was one of the rare times this year where Chris Woodward was able to use a consistent starting five. Minor, Lynn, and Chavez held the line over these 12 games with Adrian Sampson and Ariel Jurado.

Sampson and Jurado are probably rotation staples for the rest of the year. That’s what their role is likely to be going forward, for better or worse. Though the Rangers could go back to their May experiments with openers for both pitchers.

Chavez, however, has seen his effectiveness dwindle with increased exposure. His first start as a full-fledged part of the rotation came in this stretch against Detroit, and he was magnificent, going 6 1/3 innings with seven strikeouts, allowing just one unearned run.

His next two starts, against likely playoff contenders Tampa Bay and Minnesota, weren’t as successful. However, while he gave up four and five runs respectively, he has increased his pitch count to a point where, if he can keep Texas in the game (see above offensive struggles), he might be counted on for a regular 5-6-plus innings if the Rangers hold on to him.

Something else that still seems to plague manager Woodward is finding ways to get all of his relievers some regular work. Shawn Kelley, who stands to be one of the Rangers’ more valuable trade chips as contenders look for bullpen reinforcement, has given up 12 hits in his last six appearances. Over those six appearances, he’s had 16 days of rest – even for a team that doesn’t present many save situations, that’s a lot of rest over that time.

Chris Martin, another high leverage arm, has had 15 days of rest over his last six appearances. However you define value, if Jon Daniels wants to try to extract as much of it as possible from his assets in the bullpen, Woodward has to find ways, potentially unconventional ones, to get his relievers some regular work.

The Rangers were handed a couple of rough errors by official scorers in the Minnesota series – a screamer at Ronald Guzman and a line drive that caught a bad hop on Joey Gallo – but still put up nine errors over this stretch of games to hinder their efforts.

Joey Gallo tallied another outfield assist with a laser to catch one of the fastest runners in the league, Byron Buxton, tagging up and going second to third.

Delino Deshields still finds himself having some awful games out in the outfield, looking a far cry from the person who ended 2018 as an above average defender.

The Rangers have made a decision not to push the return of Isiah Kiner-Falefa. Perhaps because of their two veterans behind the dish, but also perhaps they can’t decide which of them might have to depart when IKF returns.

Jeff Mathis hasn’t been the sterling defender that brought him to the club in the first place and he’s still a gaping black hole at the plate, which would seem to make the decision easy. But the Rangers pitchers seem to throw well to him – and there’s still $3 million tied up in his contract for next season. That being said, the organization had some money tied up in Smyly and Miller and cut ties with them when they severely underperformed. There’s a chance they try to trade one of Federowicz or Mathis and push for a late-July return for Kiner-Falefa.

Yes, we repeat the Mets in this section, because they continue to be the laughing stock of Major League Baseball. Following the clubhouse media incident last time, the Mets – 13.5 out of first in the division and 7.0 out in the Wild Card race – have not decided whether they will sell, buy or stand pat at the deadline.

At the rate this club is going, you’d think they should sell, but with this being Brody Van Wagenen's first season of GM, pride might come before the fall.

Dignity surely doesn’t, as reports of Van Wagenen throwing a chair in frustration in a coaches meeting have circulated. Forget the roses, sunshine and rainbows, life isn’t even pansies, partly cloudy skies or Crayons in the land of the Mets.

Not if you’re the Mets.

Do you think the Rangers can continue to win in the second half and bring a pennant race to the final season at Globe Life Park? Share your thoughts on the team with Matt on Twitter @FisherWritesMLB.