A woman in Rhome found a WWII headstone and needed help finding the family it belonged to. Grandchildren were watching, and they now have a lost memento back in a place of honor. 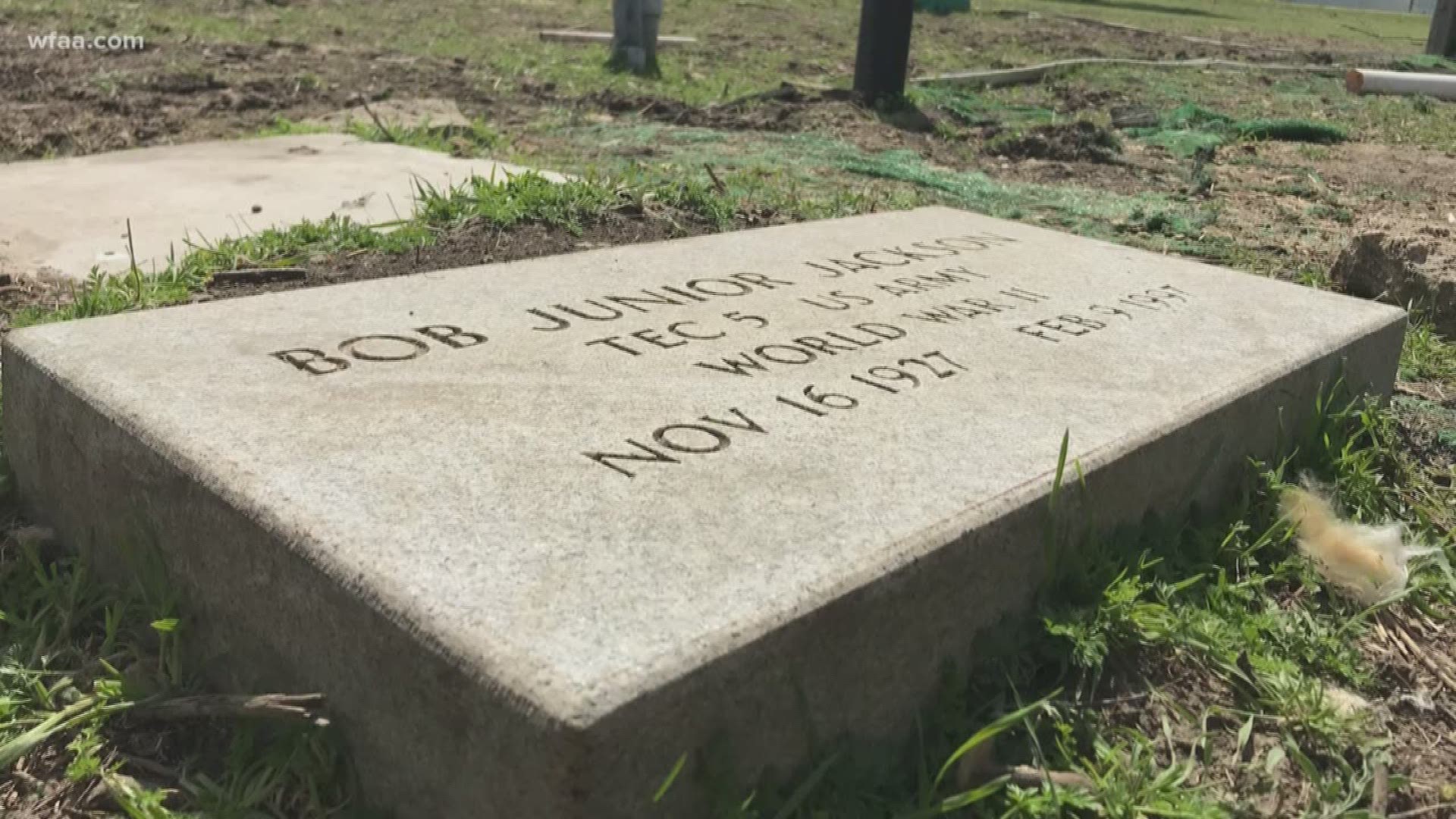 RHOME, Texas — When I first met Kathrine Dugan she already had part of this mystery figured out. She and her husband had just bought three acres next door to their home in Rhome in Wise County.

"I wanted an additional property for my horses,” she said.

And, where the back porch of the neighbor’s house used to be, she found a World War II headstone.

"I got a little concerned that there was probably a body there buried,” she joked.

But no, a Bob Junior Jackson wasn't buried there. He was buried 70 miles away at Laurel Land cemetery alongside his wife Bette Jean.

It was the rest of the mystery Kathrine needed our help to solve.

"And the lady that I bought the land from just kind of kept it here out of respect because she didn't know how to contact any of the family members."

But our first TV story did.

"I saw my Papa's tombstone on the TV,” Candy Smith said from her home in Bedford.

Bob Jackson Junior was the "Papa" for Candy Smith and her sisters.
And when their granddad died in 1997 the military provided them with the first headstone.

The family replaced it with a dual marker for both Bob Jackson and his wife Bette Jean when she died 19 years later. The original stayed in a backyard garden at their son's home in Rhome until he also passed away and the the property changed hands.

"Every time we would go out the stairway it was there,” said Wendy Aware, one of Bob and Bette Jean Jackson’s granddaughters.

"I just want to give it back to the people that it belongs to,” Dugan told us.

And a few days after our first story, that's exactly what she did. The Jackson grandchildren went to the property in Rhome to bring their granddad's original headstone home.

"I pulled it up on y’all’s website and was watching the story,” said granddaughter Cherri Collins. “And I was in the kitchen with my husband and I just broke down. Because I was like that's my Papa!"

The tombstone will now go in another backyard garden, at the home of grandson Jason Jackson. His grandparents meant so much to him that he has their names tattooed on his right forearm at the base of a family tree.

“It was really sweet that the lady was trying to get in contact with someone,” Candy Smith said.

“I'd just like to tell her thank you,” added her sister Cherri.

A thank you for saving a piece of family history and keeping Papa's memory alive.