"There's much more that needs to be done by the city of Dallas," Allison Jean said to a crowd of "amens." "The corruption that we saw during this process must stop." 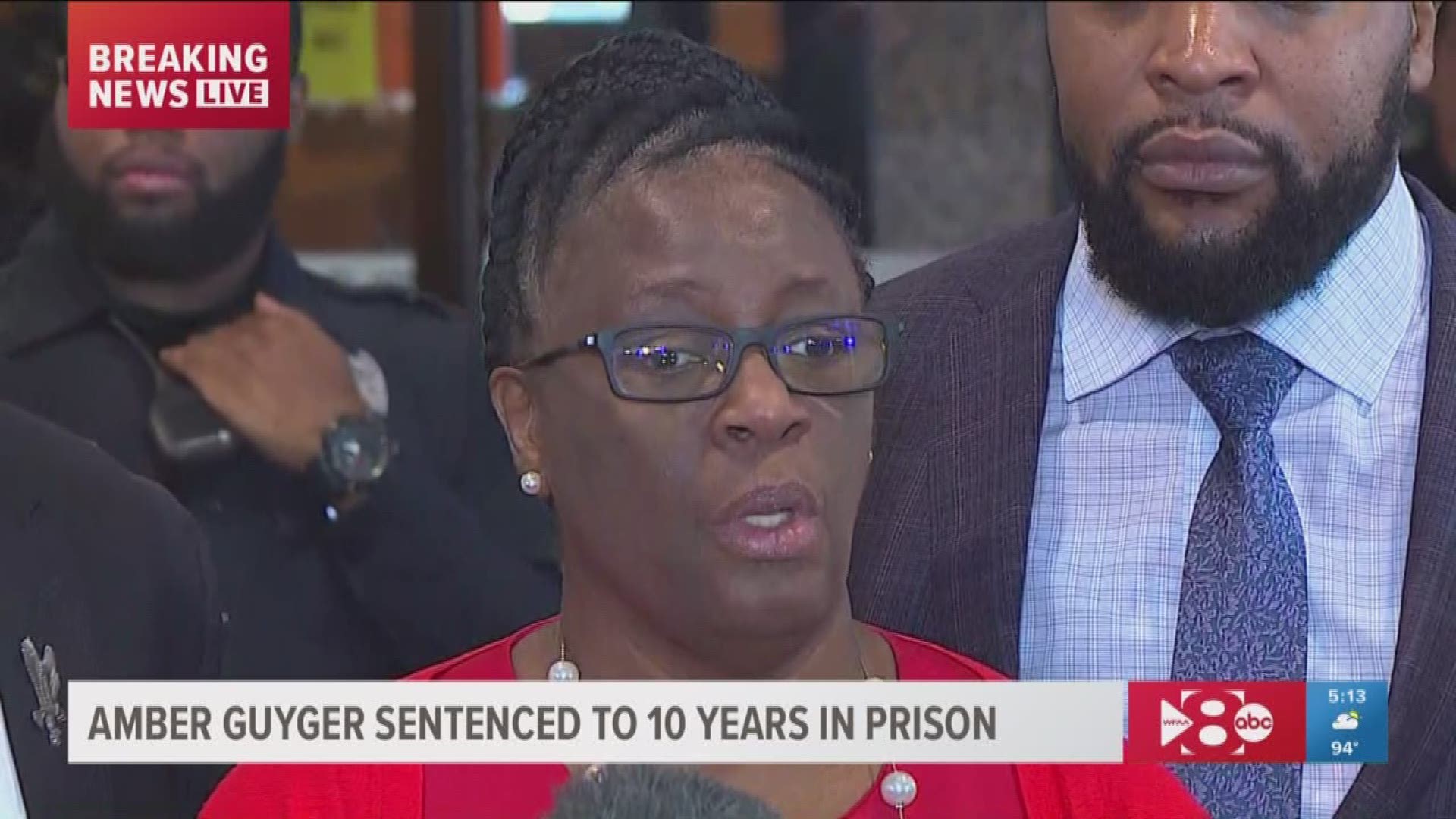 After jurors decided Amber Guyger's fate, Botham Jean's mother spoke outside the courtroom, demanding change in the city of Dallas.

"That 10 years in prison is 10 years for her reflection and for her to change her life," said Allison Jean of Guyger's sentence.

Guyger was found guilty Tuesday morning for the murder of 26-year-old Botham Jean on the night of Sept. 6, 2018. She was sentenced to 10 years in prison on Wednesday.

While the state asked jurors for a sentence of 28 years ⁠— the age Jean would be if he was still alive today — his family said they accepted the jury's decision.

“If you are truly sorry, I know I can speak for myself, I forgive you,” he told Guyger. “I know if you go to God and ask him, He will forgive you.”

He then embraced Guyger after asking the judge for permission to give her a hug.

As the Jean family made peace with Guyger's sentence, Botham's mother asked the city of Dallas and its police department "to clean up inside."

"There's much more that needs to be done by the city of Dallas," Allison Jean said to a crowd of "amens." "The corruption that we saw during this process must stop."

"Because after now, I leave Dallas," she said. "But you live in Dallas, and it must stop for everyone."

Jean said had Guyger been given proper training and used it correctly, her son would still be alive.

"He was no threat to her," she said. "He had no reason to pose a threat because he was in his own apartment."

"There's gotta be a better day, and that better day starts with each and every one of us," Jean continued.

From the start, Jean demanded transparency. Two days after the shooting, then-Dallas mayor Mike Rawlings said that Jean told him she wasn't angry but was heartbroken and wanted to make sure "all of the truth is told."

Three days after the shooting, family members and activists demanded the arrest of Guyger. She was booked later that night at a Kaufman County jail on a manslaughter charge.

But the state said in the trial that Guyger received special treatment throughout the investigation, pointing out that the camera in the patrol car she was put in the night of the shooting was turned off.

The state grilled Guyger on her actions immediately after shooting Botham Jean, noting she didn't use proper CPR and texted her ex-lover, former police partner Martin Rivera, before officers arrived on the scene.

They also questioned why Guyger was allowed to talk with friends who went to the scene after the shooting.

The state also revealed racist texts that were exchanged between Guyger and fellow officers, including Rivera.

And there was also criticism that it took the Dallas Police Department more than two weeks to fire Guyger.

In the courtroom, Creuzot called the verdict of murder the correct decision.

"An amazing act of healing and forgiveness," he said of the moment Brandt Jean spoke to Guyger.

Hall later spoke from Dallas police headquarters, acknowledging "there was sworn testimony that revealed things" that made her concerned and disheartened.

"We were so moved by Botham's brother and his asking of Amber Guyger for a hug," she said. "And we were equally moved when the judge, Judge Kemp, gifted her a Bible. That's the spirit in which I, and I think we, want to move forward. With the spirit of forgiveness, faith and trust that the changes that need to be addressed in this city are addressed and we make them together."

When asked about the revelations that concerned her during the trial, she pointed to the cameras being turned off in the patrol car and Guyger's failure to render aid after the shooting.

Hall said she is ready to create a trust with the community by launching an internal investigation into those areas of concern.

The chief faced criticism throughout the year that led up to the Guyger trial. Some of that criticism came from within her own police department, with some demanding her resignation after a more than month-long absence during a summer that saw a rise in violent crimes.

The department said she was on planned medical leave and she returned to work as chief in late August.