'You start with this': Judge Tammy Kemp gives Amber Guyger a Bible after sentencing

“This is your job,” the judge said, opening the book. The judge mentioned John 3:16, saying this will strengthen her. Guyger nodded her head. 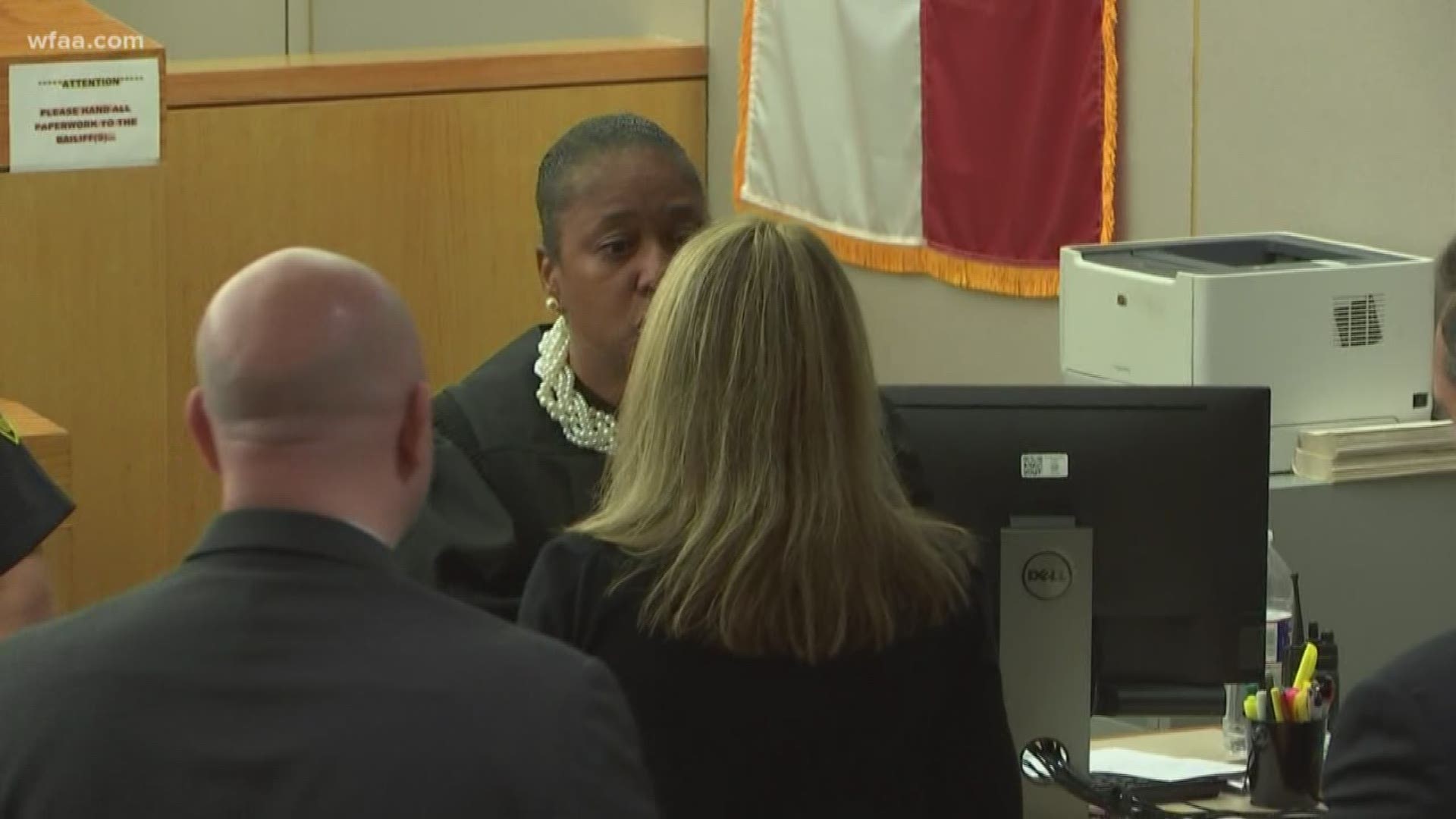 DALLAS — It started with a simple request, and it ended in an extraordinary moment of grace in a Dallas criminal courtroom.

After delivering a stirring victim impact statement to Amber Guyger, Brandt Jean, the younger brother of Botham Jean, asked Judge Tammy Kemp if he could hug his brother’s killer.

For a moment, Kemp appeared to have no idea what to do. She looked at the sheriff’s deputies scattered around the courtroom. Security had been impossibly tight during the trial, and Guyger was now a convicted murderer. But Kemp granted the young man’s request.

Guyger raced to him, and they embraced.

The judge choked back tears, as did most everyone left in the courtroom.

1 / 5
Tom Fox/The Dallas Morning News
Botham Jean's younger brother Brandt Jean hugs convicted murderer Amber Guyger after delivering his impact statement to her following her 10-year prison sentence for murder at the Frank Crowley Courts Building in Dallas, Wednesday, October 2, 2019. Brandt asked the judge if he could give Guyger a hug. The fired Dallas police officer was found guilty of murder by a 12-person jury. Guyger shot and killed Botham Jean, an unarmed 26-year-old neighbor in his own apartment last year. She told police she thought his apartment was her own and that he was an intruder. (Tom Fox/The Dallas Morning News/Pool)

Guyger’s distraught family had been escorted out earlier after the sentence was announced, so they did not witness this, or what happened next.

After stepping off the bench to comfort the Jean family, the judge walked over to Guyger, still at the defense table. She bent low and spoke in the young woman’s ear. “You understand?” the judge said, barely audible.

The judge appeared to be overcome in the moment, and left the courtroom. She returned a moment later, a small Bible in her hand.

“You can have mine,” the judge said to Guyger. “I have three or four at home.”

She then began to counsel Guyger. The pair were talking low, barely audible, just the two of them. “This is your job,” the judge said, opening the book.

The judge mentioned John 3:16, saying this will strengthen her. Guyger nodded her head.

“You just need a tiny mustard seed of faith,” the judge said. “You start with this.”

Guyger embraced the judge, who hugged her back. Guyger whispered something.

“Ma’am,” the judge said warmly. “It’s not because I’m good. It’s because I believe in Christ.”

“You haven’t done so much that you can’t be forgiven,” the judge told her. “You did something bad in one moment in time. What you do now matters.”

The judge told Guyger that she could take the Bible with her as deputies prepared to escort her to the prisoner holding cell connected to the courtroom.

As Guyger left to begin her 10-year prison sentence, the judge let out a deep sigh, turned and left the courtroom.