Texas lawmakers react to pro-Trump mob breaching the US Capitol

Video footage shows officers deploying pepper spray after the crowds began charging officers and moving towards the US Capitol steps. 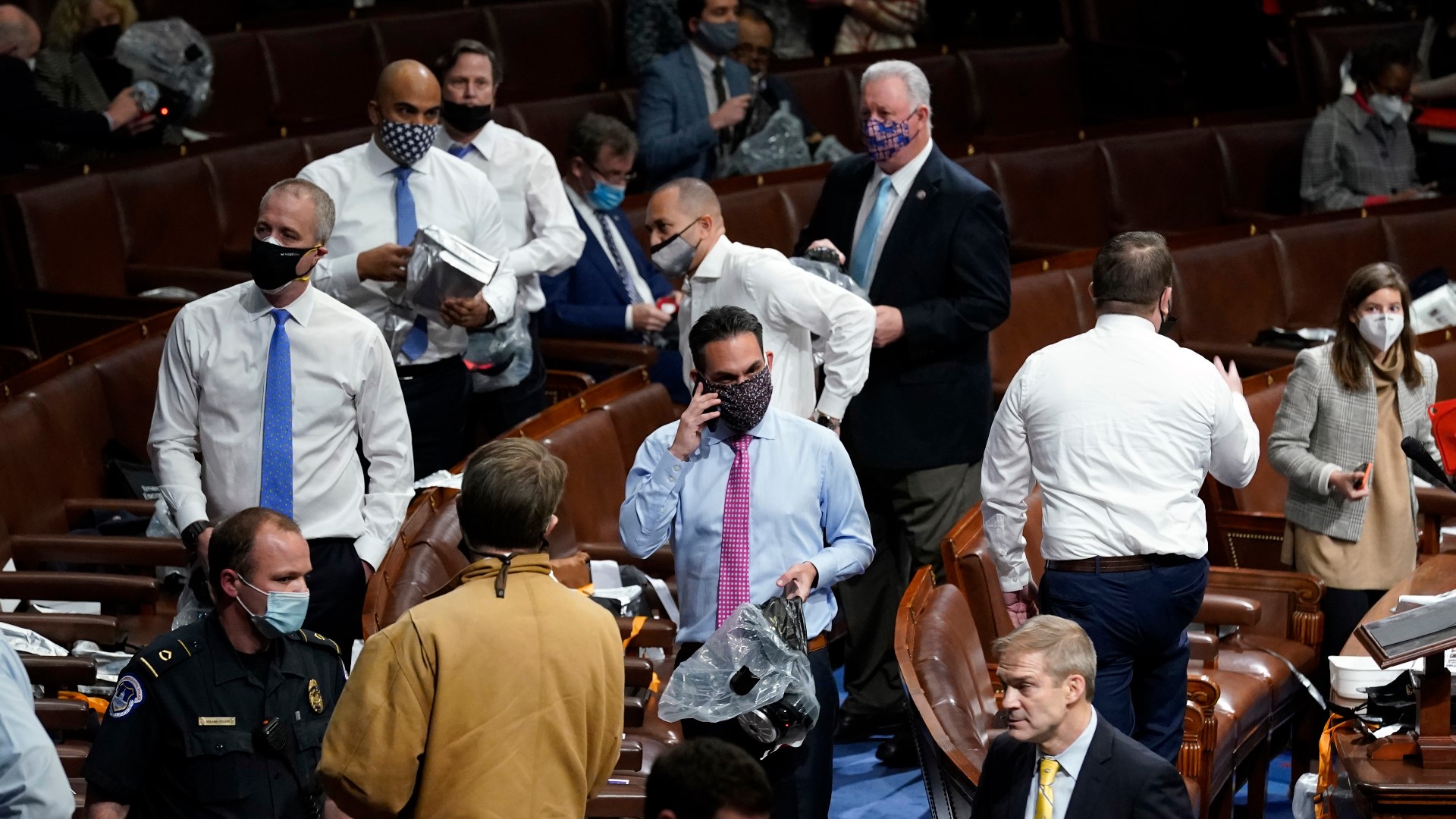 This story will be updated as soon as new statements come in.

Several Texas lawmakers spoke out Wednesday about the violent pro-Trump mob who stormed the U.S. Capitol building following President Donald Trump's insistence that he would "never to concede" the election in a speech on the Ellipse.

The group broke through several barriers placed at the steps of Capitol, while the certification of Electoral College votes began inside.

Video footage shows officers deploying pepper spray after the crowds began charging officers and moving towards the Capitol steps. The scene escalated as some of the mob made physical contact with officers, and police responded with physical action.

Shortly after the Capitol went on lockdown, Texas lawmakers spoke about the violence unfolding in Washington, D.C. They called for an end to the violence and many thanked Capitol police.

"Laura and I are watching the scenes of mayhem unfolding at the seat of our Nation’s government in disbelief and dismay. It is a sickening and heartbreaking sight. This is how election results are disputed in a banana republic – not our democratic republic. I am appalled by the reckless behavior of some political leaders since the election and by the lack of respect shown today for our institutions, our traditions, and our law enforcement. The violent assault on the Capitol – and disruption of a Constitutionally-mandated meeting of Congress – was undertaken by people whose passions have been inflamed by falsehoods and false hopes. Insurrection could do grave damage to our Nation and reputation. In the United States of America, it is the fundamental responsibility of every patriotic citizen to support the rule of law. To those who are disappointed in the results of the election: Our country is more important than the politics of the moment. Let the officials elected by the people fulfill their duties and represent our voices in peace and safety. May God continue to bless the United States of America."

"The Dallas County Republican Party supports law and order, and our first amendment right to freely assemble. We condemn all violence and pray for everyone involved in the events in our Nation's Capital. Now is the time for us to be united as a Nation."

I call on protesters in our state and our nation’s Capital to practice their constitutional right in a peaceful manner.

I stand for election integrity and the democratic process. I will not tolerate violence and civil disorder.

I am saddened and absolutely disgusted by the rioting at the Capitol in Washington. We are a nation of peaceful processes, deliberation, law, and order. We do not bow to violent mobs. This is un-American and unacceptable, and it must stop. We are better than this.

I am horrified by what is happening in our nation’s capital. It is devastating that our country has become this fractured. Violence is never the answer. It is my hope and prayer that cooler heads will prevail and we will have a peaceful transition of power. (1/2)

STATEMENT from Governor @GregAbbott_TX, R-Texas, about the violent takeover of the U.S. Capitol by Trump supporters. pic.twitter.com/8eHc5VMd7L

I was in the House Chambers when they came in and told us the Capitol had been breeched. They took the Speaker out of the chambers and locked us down and told us to stay in place. Later their were popping noises where we had to get down and follow Capitol Police orders out. (1/2)

As we were leaving, in an act of domestic terrorism, the doors to the chamber itself were breeched. For now I’m still hunkered down in what appears to be a safe location. When our Capitol is secured I will return to the chamber to fulfill our constitutional duty. (2/2)

These jackasses are domestic terrorists. A true threat to our Nation. They must be met with the full weight and force of the law. Arrest and prosecute them all. https://t.co/sQE8RChcNJ

The actions by criminals storming the Capitol are un-American and should be condemned by everyone who loves our nation. God Bless Capitol Police and all first responders. I pray from their safety and America.

I want to thank Capitol Police for their bravery and for keeping those on Capitol grounds safe. Violence is never an acceptable answer.

The actions today at our US Capitol is not the act of patriots. It’s disgraceful. The Bill of Rights guarantees the right to assemble peacefully. It does not condone violence, destruction of property, or trespassing to disrupt proceedings outlined in the Constitution. #txlege https://t.co/jYWJFEmmnS

The Texas GOP supports the #FirstAmendment right of all to freely assemble and redress grievances. However, we do condemn violence and pray for all in our nations capital.

To those storming the Capitol - I am on the House floor and I will not be deterred from upholding my oath, under God, to the Constitution by mob demand. #StandUpForAmerica

Violence is always unacceptable. Even when passions run high.

Anyone engaged in violence—especially against law enforcement—should be fully prosecuted.

God bless the Capitol Police and the honorable men & women of law enforcement who show great courage keeping all of us safe.

Those storming the Capitol need to stop NOW.

The Constitution protects peaceful protest, but violence—from Left or Right— is ALWAYS wrong.

And those engaged in violence are hurting the cause they say they support.

To those storming the Capitol right now: every American has a right to peaceful protest, but violence is unacceptable.

To the Capitol Police who put their lives on the line for us every day: thank you.

I was proud to stand shoulder to shoulder with Capitol police barricading entrance to our sacred House chamber, while trying to calm the situation talking to protestors.

What I’m witnessing is a disgrace. We’re better than this. Violence is NEVER the answer.

Thank you to all who have expressed concern for my safety. I was in the Capitol, and I am now in a safe location, following guidance of the Capitol Police.

I am disgusted by the actions of those who came to our nation’s capital with violent intentions. This behavior is an extraordinary stain on our democracy. (2/2)

The violence and destruction we are witnessing in the Capitol is an assault on our democracy. pic.twitter.com/NVRHtmogqI

Congressman Dan Crenshaw tweeted for the mob to "stop this bull---- right now."

Rep. Colin Allred said he had been evacuated from the House floor:

I was evacuated from the House floor and am currently safe.

My statement on today’s events: pic.twitter.com/pJ0AMizMey

Joaquin Castro went live on Instagram with his brother Julian from inside his office in the Capitol.

I’m safe and sheltering in place. Thank you to folks reaching out.

The President of the United States incited a coup attempt.

It’s a dark day in America — but peace, democracy, and the rule of law will prevail.

.@tedcruz should resign from the United States Senate immediately. https://t.co/O1D5K6Gt0k

Please join her @tedcruz and the (some- not all) Texas Republican Congressmen who helped @realDonaldTrump promote baseless lies to incite this attack on our democracy. Then apologize to the 🇺🇸people without reservation or excuse for your role in this evil. https://t.co/CLHzlcbjxi

I'm disgusted by the violence and riots at the US Capitol Building today. I am praying for my friends who serve in office and who work in DC. The president needs to deliver a televised address to encourage this mob to disperse and leave the Capitol building.

It is your self serving attempt at sedition that has helped to inspire these terrorists and their attempted coup. https://t.co/AGj44pipsd

President Trump tweeted and asked for "everyone to remain peaceful."

I am asking for everyone at the U.S. Capitol to remain peaceful. No violence! Remember, WE are the Party of Law & Order – respect the Law and our great men and women in Blue. Thank you!

President-elect Joe Biden went live on air on television calling for President Trump to appear on air and condemn the mob. He tweeted shortly after:

Let me be very clear: the scenes of chaos at the Capitol do not represent who we are. What we are seeing is a small number of extremists dedicated to lawlessness. This is not dissent, it's disorder. It borders on sedition, and it must end. Now.

President Trump put out a video on Twitter still claiming a baseless allegation that the presidential election was "stolen": "We had an election that was stolen from us...but you have to go home now, we have to have peace." He then called his supporters "very special."

Twitter flagged the tweet, saying that "this claim of election fraud is disputed, and this Tweet can't be replied to, Retweeted, or liked due to a risk of violence."

As a result of the unprecedented and ongoing violent situation in Washington, D.C., we have required the removal of three @realDonaldTrump Tweets that were posted earlier today for repeated and severe violations of our Civic Integrity policy. https://t.co/k6OkjNG3bM