The lieutenant governor also talked about how the Texas legislative session will look different in January, thanks to COVID-19. 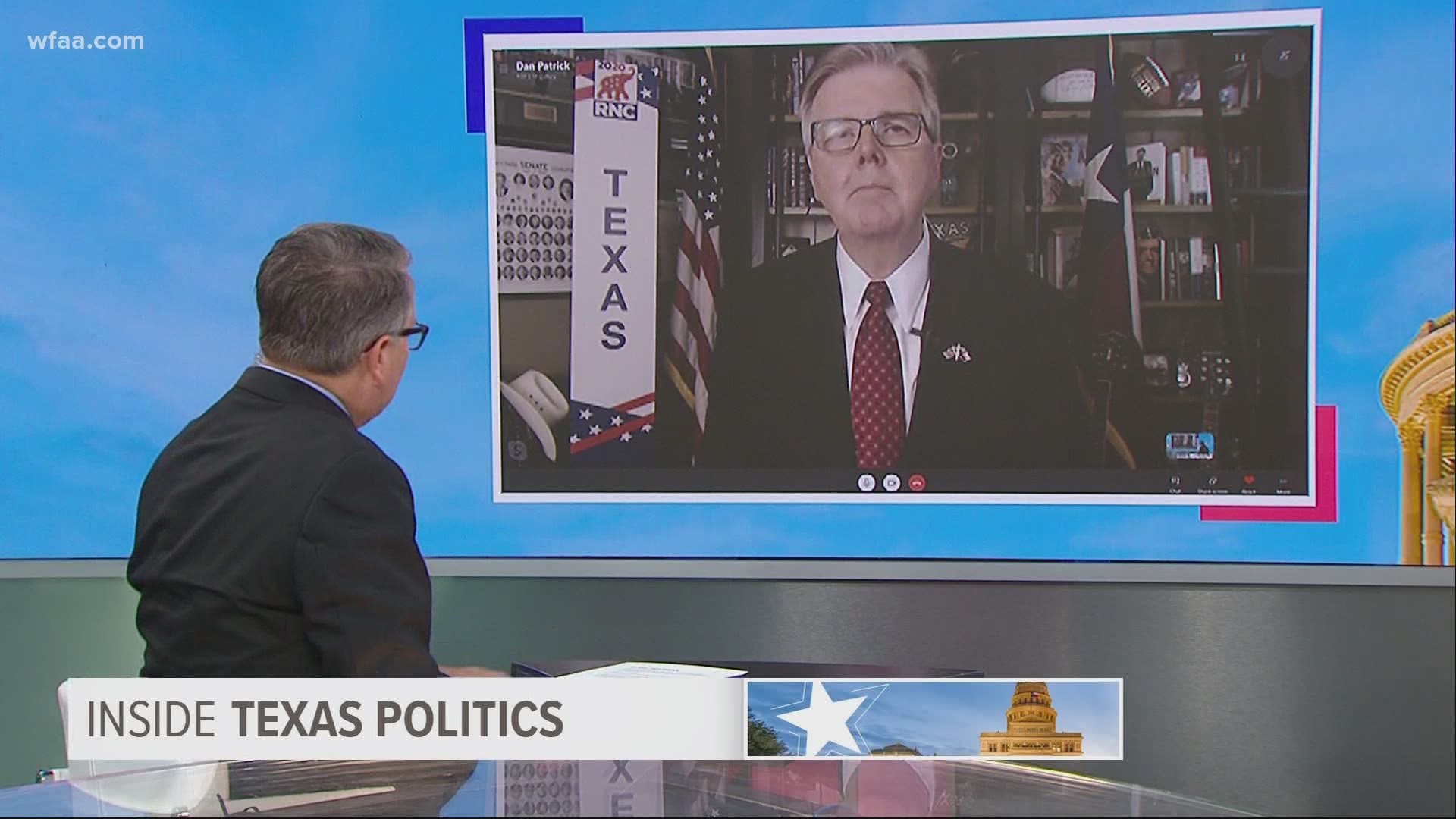 Lt. Gov. Dan Patrick said he believes President Donald Trump did not overlook African Americans during his speech accepting his renomination, even though the president only mentioned Kenosha, Wisconsin in passing and never referred directly to racial unrest gripping parts of the country.

Patrick, a Republican, was supposed to attend, but instead stayed in Texas due to Hurricane Laura.

“If you think about all the African Americans he had at the convention last week, they were all extraordinary. So I think he’s clearly reaching out to the Black vote in the United States,” he said. “I think he’s going to do very well with it, more than he did the last time and that will be significant if he picks up three or four more points.”

Patrick says the president spoke extensively about law and order, criminal justice reform and justice for all Americans.

“The rhetoric is not nearly as important specifically on that issue as to what he’s actually done for the African American community," said Patrick. "Again, totally supporting the Black historic colleges, the criminal justice reform, the innovation zones that Tim Scott created and lowering the unemployment of Black Americans.”

The Texas legislature returns to session in January. Patrick also discussed the type of legislation he could get behind that might support Black Texans.

“We’ve got to stop this idea in this country that you’re going to fight back against police and run from them all the time," he said. "Secondly, we need training... We need to put more money, not defund police like Austin did, into training to how to de-escalate those situations so that we don’t end up in a shooting.”

While Patrick says they want the legislative session to be as normal as possible, COVID will force some changes.

“We’ll have some plexiglass to divide in some of our hearing rooms, to divide senators so they’re not turning and talking to each other face-to-face as much," he explained. "We’ll have protocols put in for our witnesses.”

Registered Hispanic voters prefer Joe Biden over Trump by 9.5 points, according to a new poll from the Texas Hispanic Policy Foundation and Rice University, which the poll calls a modest margin.

“It gives you a real sense about how Latinos are not monolithic and people are going to have to work for the votes,” said Regina Montoya of the Texas Hispanic Policy Foundation.

The results also show a clear gender gap, with more Hispanic women supporting Joe Biden, as well as differences based on age, religion and education level.

The study found that more educated Hispanics prefer Trump at the moment, which is the opposite of some national polls involving non-Hispanic voters.

“I think this is one of those examples, too, that Latinos, Hispanics, are up for grabs because they’re getting information now," Montoya said. "So it may be that as educated Hispanics get more information, they may change their minds on this. But that was an interesting nugget.”

Montoya says they did the study because of the growing size – and influence – of the Hispanic population in Texas.

“When you think about the sheer and vast numbers of Hispanics in Texas and how that could move elections nationally, it could move it on the statewide level and then also local issues," said Montoya. "It’s clearly very, very important for people to be able to craft their message in a way that will excite people, excite one of the largest groups in Texas and that’s the value of this.”

Collins aims to be first female representative elected in district

Republican Genevieve Collins is putting plenty of money behind her effort to win Congressional District 32. She earmarked more than $2 million for TV commercials over the next couple of months to try to topple freshman Democrat Colin Allred.

“I believe we need less government in business, but more business in government," Collins said. "I think we need more women in government to champion our experiences, our voices and what we’ve been going through our entire lives.”

Many political observers say the district is still likely Democratic.  So where does she see a path to victory?

“Reigniting folks that stayed home in 2018 and ensuring that they feel connected to my message, not just as a businesswoman, but as a woman who has worked with every school district that makes up this congressional district with my company,” she said.

This is the first ever political race for Collins, but she comes from a political family. Her grandmother, Calvert Keoun Collins, was the first woman ever elected to the Dallas City Council in 1957.