In the absence of face-to-face contact this fall, Democrats will be picking up the phone to keep up their momentum, said Congresswoman Veronica Escobar. 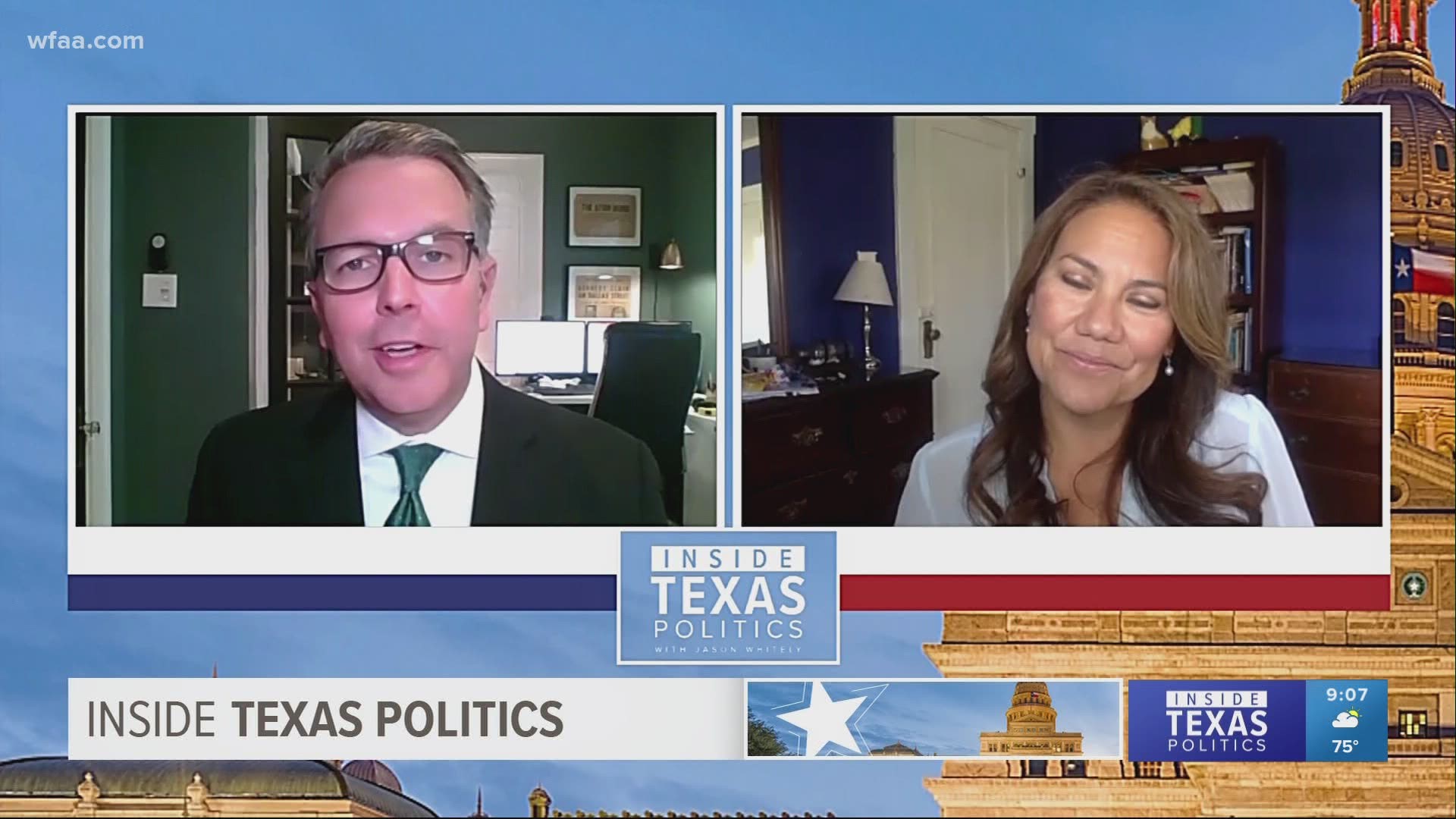 Congresswoman Veronica Escobar says campaigns in the age of the coronavirus are harder than they’ve ever been. The successful ones, she believes, always have a strong door-to-door ground game.

But in the absence of face-to-face contact this fall, the representative from El Paso says Democrats have to use the tools they have available to keep up their momentum.

She said there are fewer other ways to reach people during the COVID-19 pandemic.

RELATED: Voters can expect 'a texting blizzard' during the 2020 election

Escobar calls the selection of Kamala Harris to be Joe Biden’s running mate monumental, for women in general, but for women of color in particular.

“Children were separated from their parents at the border. We have seen unaccompanied minors expelled into countries that are not their own," Escobar said. "We have seen, really, cruelty like we’ve never known in our generation. People of color and minority communities have been on the receiving end.”

And she says the historic symbolism of a woman of color running for vice president allows many little girls in Texas to admire and emulate someone who looks like them.

“I’m a big believer in the idea of when you see it, you can be it," Escobar said.

During the Democratic National Convention, Escobar represented Texas during roll call. Back in February, she gave the Spanish-language response to the President’s State of the Union address.

As her star is rising in the Democratic Party, she wants people to view her as a prism for her home city of El Paso.

“What I want everyone in the country and in the state to know is that El Paso represents the best of America," she said.

Watch this week's full episode of Inside Texas Politics below:

When you think of Collin County, you think of corporate headquarters and hotels. Rep. Van Taylor says that’s why he’s one of the three authors behind the HOPE Act (Helping Open Properties Endeavor).

The HOPE Act would provide financial assistance to the commercial real estate market, with a particular focus on businesses with Commercial Mortgage-Backed Securities (CMBS) debt. That includes many hotels, especially here in Texas.

RELATED: Denton hotel forced to cut staff from 175 to 15 due to COVID-19 pandemic

Taylor says mortgage delinquencies are already at an all-time high when it comes to CMBS commercial debt. And if those businesses don’t get access to those emergency loans, he says entire communities could be lost.

“We’re going to have a tsunami of foreclosures,” he said. “About a third of the hotels in the United States have that CMBS debt and the delinquency rate is actually staggering."

He said more than 60% of those hotel loans are delinquent in Houston and 20% are in the Dallas-Fort Worth area. The same is occurring in other large cities across the U.S.

"So you’re seeing huge numbers of delinquencies across the country," Taylor said.

President’s son says focus should be on infrastructure 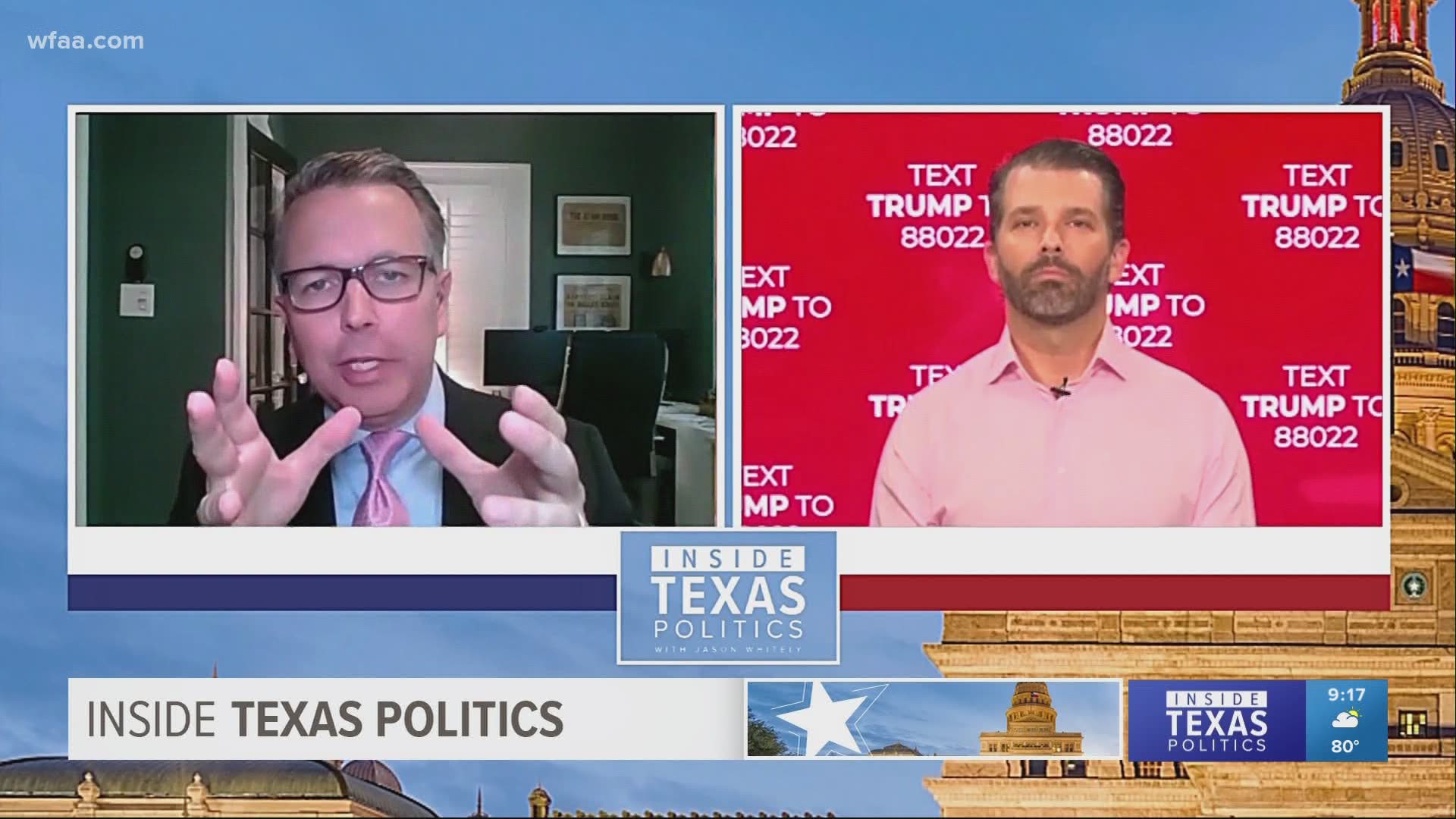 If voters elect President Donald Trump to a second term, his son says rebuilding the guts of the country should be a priority.

“I think we’d love to see him work with Democrats to be able to get an infrastructure bill. I think everyone recognizes that the infrastructure of this country has become dilapidated,” Donald Trump Jr. said.

“Donald Trump is a builder. He understands how to do these things," Donald Trump Jr. said.

He said the president and his team will accept the results of the November election, if, he said, it’s held fairly.

But he didn’t elaborate on what it might look like if they deem the election to be “unfair.”

“We’re fine with absentee balloting. We’ve said that 100% where there’s a system," Trump said. "But where randomly, you blanket mail hundreds of millions of ballots to people who may not be living in those places is a system that’s ripe with fraud.”