Hegar received a major boost during the last quarter in her effort to unseat Republican incumbent Sen. John Cornyn when she raised $13.5 million. 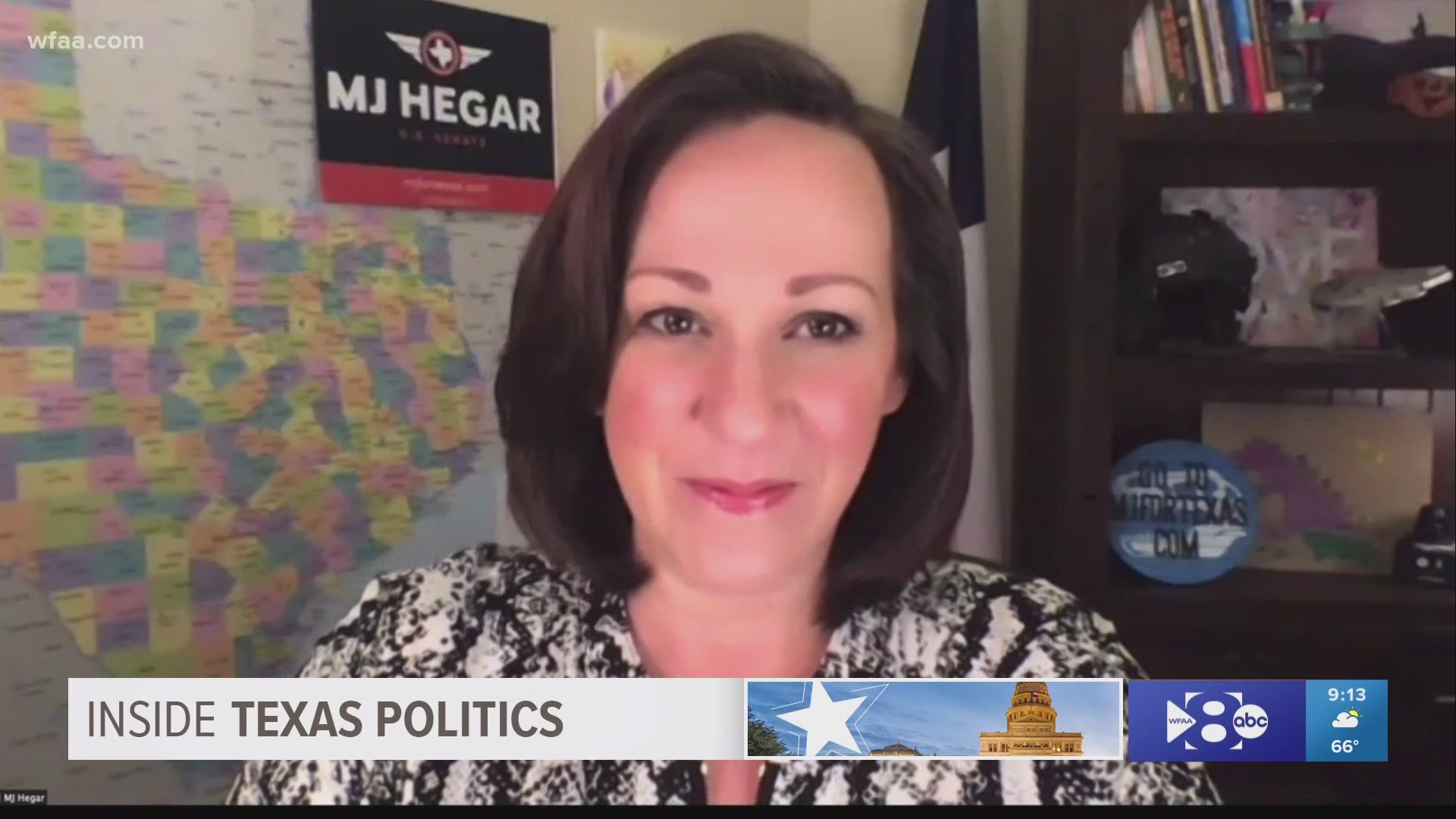 Democratic Senate candidate MJ Hegar has an idea about how to avoid future crises on the U.S. Supreme Court and the politics that surround confirmations: term limits.

“Judges are getting appointed younger and younger. We’re living longer and longer,” Hegar said. “And in order to make sure that we have people on the bench that are not disconnected from the values of our country, and not disconnected from the challenges of the regular, everyday people who are the boots on the ground in this country, the best thing to do is have term limits.”

Hegar received a major boost during the last quarter in her effort to unseat Republican incumbent Sen. John Cornyn when she raised $13.5 Million.

And with the election only weeks away, she’s going to have to spend it fast.

She says she wants voters to know more about Cornyn’s record, which she says isn’t in step with everyday Texans. So expect to see plenty of ads and receive plenty of mailers.

“It’s nice to be hearing from two sides instead of one like we normally do in Texas," Hegar said on Inside Texas Politics.

She’s still down in various polls. But the gap varies from poll to poll, generally between two to eight points.

Two Republicans will square off against each other in the race for Texas Senate District 30, a huge, mainly rural district that spans 14 counties, including parts of Collin and Denton counties.

And now the race is on to see which candidate can prove they’re more conservative. State Rep. Drew Springer says that's him.

Springer, who’s spent eight years in the Texas House, finds himself in the runoff against Shelley Luther, who became a star of the right after her highly publicized refusal to shut down her salon, in defiance of Gov. Greg Abbott’s orders.

The state rep says he also believes Texas should be open.

“I think the governor is way behind on this. It’s why I’ve called for a special session to be able to address those type of issues," Springer said. "I’ve argued adamantly for the wineries, distilleries and brewpubs.”

The two virtually tied in the special election, with Luther leading Springer by only 164 votes out of nearly 69,000 total.

“We were excited where we finished in the special election.  I mean look, I ran against a national celebrity who’s been on Fox News multiple times, even during the campaign.”

The campaign leading up to the special election was noted for its contentiousness, particularly between Springer and Luther.

"Anytime you have a senate seat, there’s a lot of people competing for it,” Springer said.  “Part of the reason it was contentious, is you had, really, normally a six-month campaign boiled down to 36 days.”

The winner will replace Pat Fallon, who was nominated for a Congressional seat that is on the November ballot.

The date of the runoff has not been scheduled yet.

Welcome to a battleground state

Democrats are bullish on their chances in Texas this election.

Support for Democrats has been building since 2016 when Texas became a single-digit state for the first time in two decades, said Manny Garcia, the executive director of the Texas Democratic Party.

“We increased our urban dominance, made big inroads into suburban Texas, flipped all these state House seats, congressional seats, state senate seats and showed that statewide victory was possible," Garcia said of the 2018 election.

He says it’s realistic for Democrats to win the presidency, control the U.S. Senate and flip the Texas House all in one election.

Many of their opportunities overlap geographically.

He said the party is campaigning a lot in Collin and Denton counties and other suburban areas.

To hear the full conversation with Manny Garcia on this week's episode of Y'all-itics, subscribe wherever you get your podcasts: