The Southwest Believers Convention's last day will be Saturday, and Tarrant County Judge Glen Whitley is frustrated that no one is wearing masks. 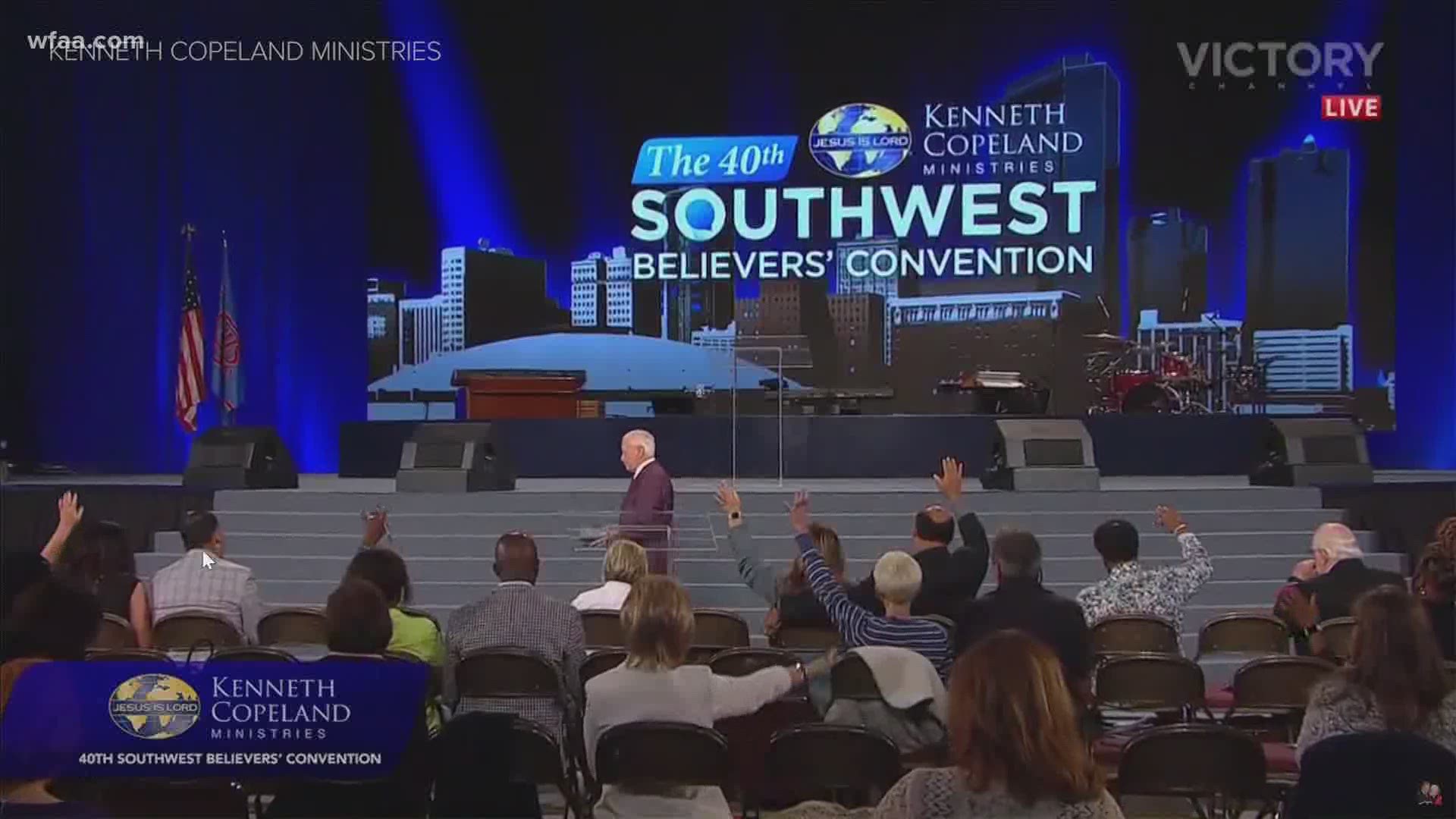 FORT WORTH, Texas — Popular televangelist Kenneth Copeland is drawing the ire of Tarrant County Judge Glen Whitley as his ministry finishes a 5-day evangelical convention in downtown Fort Worth.

The event, which is called the Southwest Believers' Convention, is being held at the Fort Worth Convention Center.

It began on Aug. 3, and its last day is Saturday.

Signs outside ask attendees to affirm that they don't have COVID-19, symptoms, or have had contact with anyone infected before entering the building.

Another sign reads that masks are required, but it's hard to find any face coverings while watching services, which are streamed online and on the Victory Channel.

"They may have come in the door wearing them, but they didn't keep them on for very long," Whitley said. "Now's not the time to relax."

Tarrant County, like Dallas County, is reporting a declining trend in COVID-19 cases.

Whitley said he's excited to see that and attributes mask adherence to the most recent drop in daily numbers.

"I think people are being more serious about wearing masks," Whitley told WFAA.

When asked if he was disappointed seeing a lack of face coverings at the convention, Whitley agreed that it's the kind of event that may have a negative impact on flattening of the curve.

"I have no question in my mind that if Pastor Copeland told people to wear their masks, that those people in the audience would wear them," Whitley said.

Whitley also expressed frustration that he has no control over the event or any way to police it.

The convention is protected under Governor Abbott's most recent executive orders, which don't require worshippers to wear masks at churches.

So, congregations have to police themselves.

"We have no authority whatsoever when it comes to a religious event," Whitley said.

Abbott's orders also give wide flexibility for places of worship when it comes to occupancy and social distancing.

That thread has landed some places of worship in the public eye.

That camp also was in Tarrant County.

If Whitley had any say, he would have made both events mandate masks.

"I would have 100% said that you've got to be wearing masks and anyone who isn't has got to leave," Whitley said.

The Copelands have made headlines when it comes to health advice or using the Holy Bible to talk about it.

In February of 2018, Gloria Copeland (Kenneth's wife) was criticized for comments she made about the flu.

In a video on the Kenneth Copeland Ministries YouTube page, she said:

The video continues with Copeland insinuating that Jesus is a form of the flu shot.

“Jesus himself gave us the flu shot, he redeemed us from the curse of flu,” Copeland said. “We’ve already had our shot, he bore our sicknesses and carried our diseases. That’s what we stand on.”

In April, Kenneth Copeland went viral for religious exclamations made about COVID-19 from the pulpit.

"COVID-19! *blowing noises* I blow the wind of God on you! You are destroyed forever! And you'll never be back!" Kenneth Copeland shouted, as ministry members recited his words.

Pete Evans, the lead investigator for the Trinity Foundation, helps uncover religious fraud within churches alongside the foundation, which has been around for almost 30 years.

He told WFAA that the decision to hold the convention was careless.

"It discounts the dangers that people are going through. It's foolhardy," Evans said.

Evans has investigated the Copelands extensively.

Kenneth Copeland, alongside fellow televangelist Jesse Duplantis, once defended the use of private jets as a necessary part of their ministry.

Known for living a lavish lifestyle, Evans said the convention is about profits for Copeland's ministry.

"These services are very lucrative. They take up numerous offerings every day. So I believe they have to continue these kinds of events to keep their donor base active," Evans said.

"It's done so they can keep flying private jets and living in mansions."

Kenneth Copeland Ministries did not respond to WFAA with a comment, but the convention's spokesperson has told other news outlets that the event is adhering to the governor's orders and is spacing attendees out.