A resident noticed their West African Banded Cobra went missing from its enclosure, officials said. They're now warning residents to be on alert, as they search. 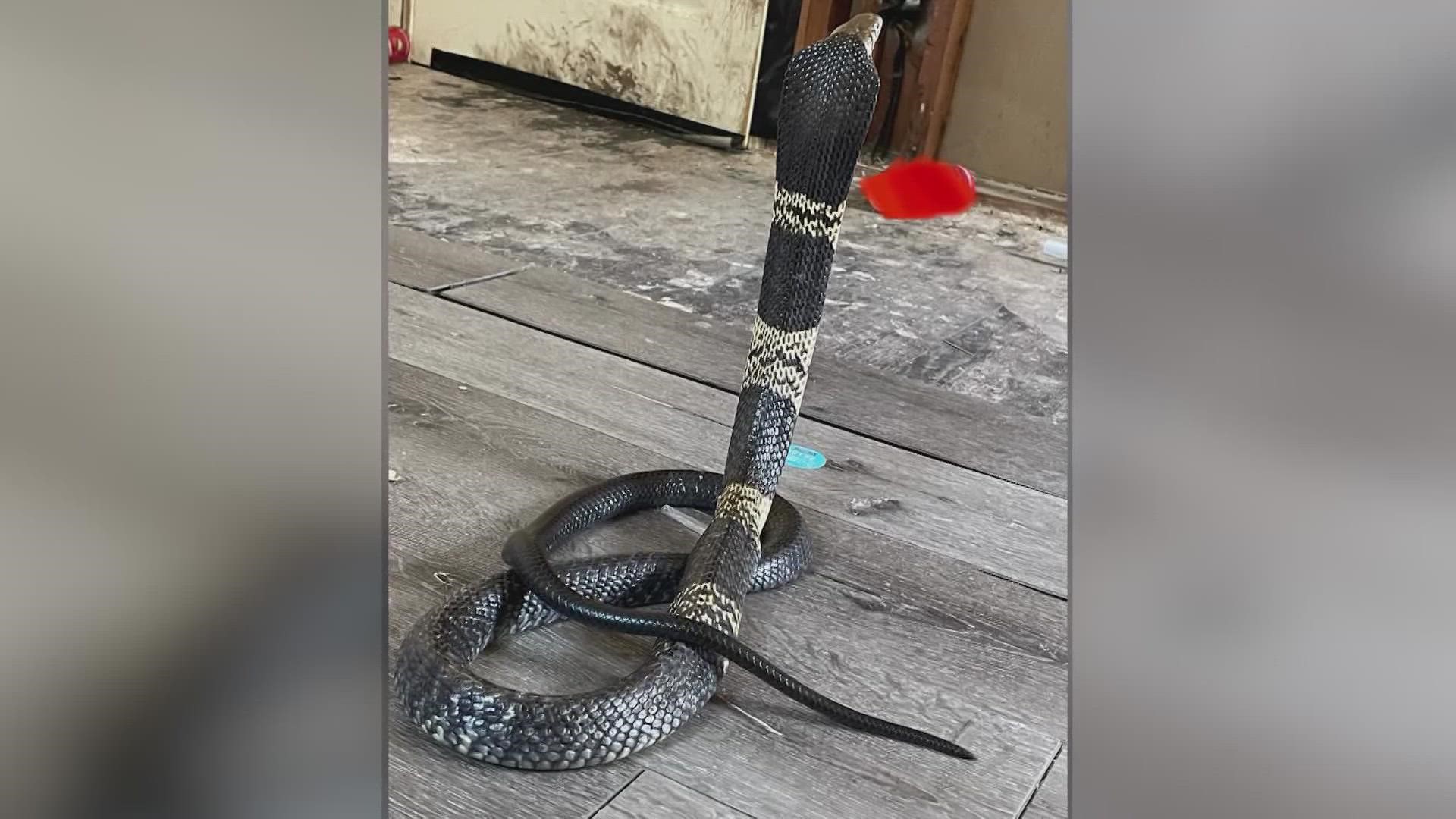 GRAND PRAIRIE, Texas — Grand Prairie Animal Services has a warning to the public: something is amiss-ssss, after a venomous snake was reported missing from a resident's home.

Animal services said they responded around 6:30 p.m., Tuesday, to a home off Cherry Street, after the resident noticed their West African Banded Cobra went missing from its enclosure around 5 p.m. after a reported "cage malfunction."

Tre Mat owns the snake. He said he kept the snake in an in-house aquarium. He said the snake got out at a time when it wasn’t shut properly.

"It only took a couple minutes," Mat said. "I'm doing everything I can to help retrieve the snake."

The snake is permitted by the State of Texas Parks and Wildlife Department, according to animal services.

Officials said animal services, the owner, and a venomous snake apprehension professional searched for the snake inside and outside of the home through the night, with no success.

“We’ve never dealt with a West African Banded Cobra before,” Grand Prairie Police Officer Mark Beseda said. “This is something new for us and frankly, it put our officers on the edge. We’re out there walking in the grass, around the home wondering is my next step going to be on a poisonous snake.”

“We want the public, the residents in that area to be aware that that snake is possibly outside of that home,” Beseda said. “They need to know that it is extremely dangerous, extremely aggressive, and if they see a snake, any snake that they believe to be a cobra they need to call 911 immediately and keep their distance.”

Randall Kennedy runs Dallas Fort Worth Wildlife Control. He assisted police in the search. He said the snake isn’t as dangerous as some describe.

“This is a six-foot snake. You don’t want to try to chase it down with your garden hoe or anything like that,” Kennedy said. “It is a very toxic snake, the venom is extremely toxic but in the same hand the snake is not extremely aggressive so unless you are grabbing or stepping on the snake, you’re going to be OK.”

Officials are warning residents who live in the area and see any type of snake believed to be the missing cobra avoid the snake and call 911 immediately. They added that residents should not attempt to capture the snake, either.

#DEVELOPING A “dangerous, venomous” snake is on the loose in Grand Prairie. The owner tells me the West African Banded Cobra got out after a “cage malfunction”.

Here’s a pic. The owner lives off the 1800 block of Cherry Street in Grand Prairie. If you see it call 911. pic.twitter.com/aZJZYF802H

Kennedy said Dallas Fort Worth Wildlife Control will be in the area Thursday searching once more, placing traps with hopes they catch it. If you are interested in obtaining a trap you can find contact information on their website, click here.

Grand Prairie police has also been in contact with the Texas Parks and Wildlife Department related to policy and procedures on the permitting of venomous snakes in residential areas.