“We passed the ordinance for one reason to keep abortion clinics out of Waskom and we will fight it tooth and nail as far as we have to.” 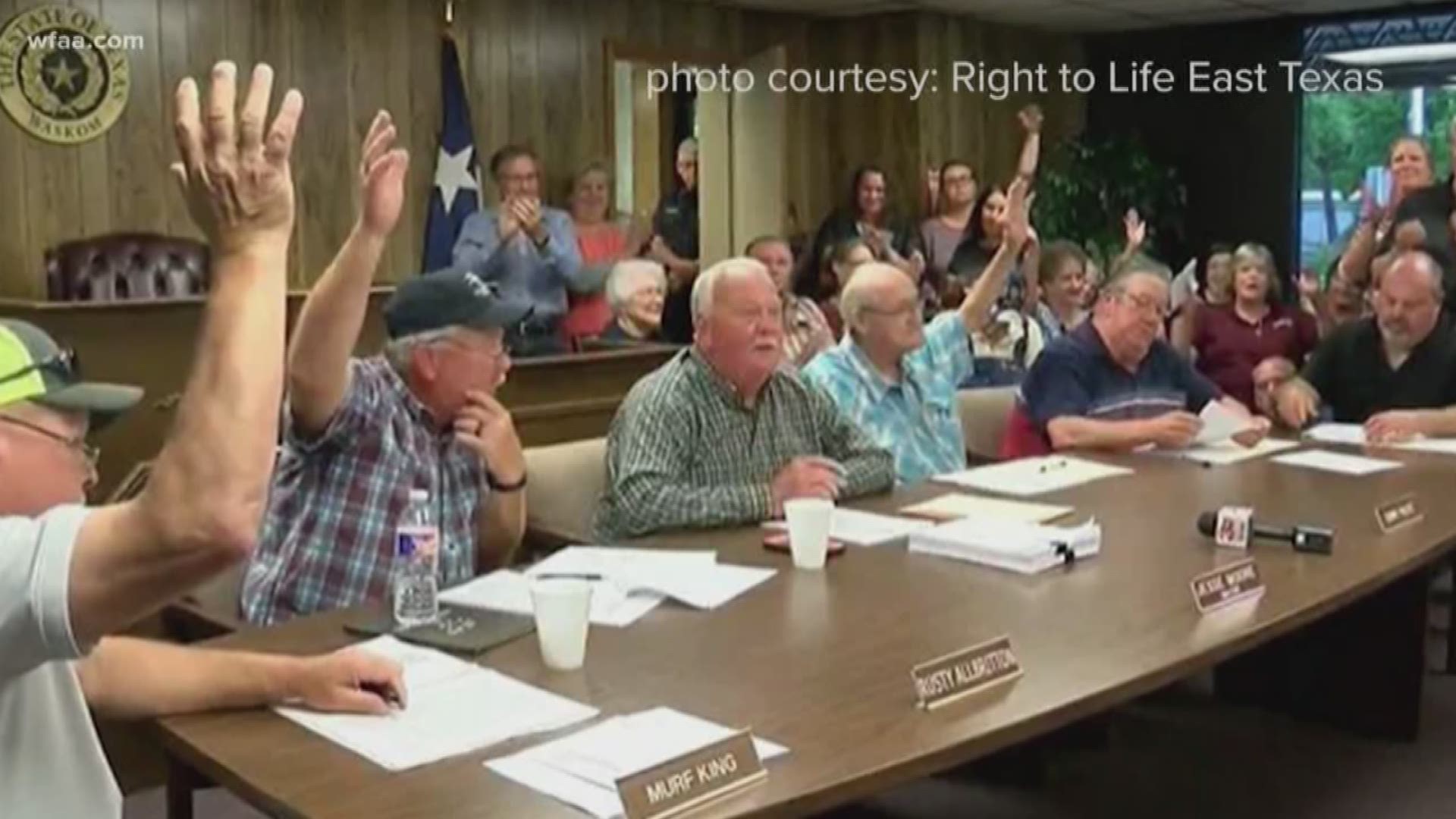 WASKOM, Texas — This story has been updated throughout.

As Mineral Wells on Tuesday night voted to take no action on an ordinance that would effectively ban anything and everything related to abortion within its city limits, the Texas city that did it first just last month says the nationwide reaction has been much more intense than anyone expected.

“Well it’s kind of been a shock. We weren’t expecting all that attention,” said Waskom mayor Jesse Moore from his city hall office.

It's now been more than a month since Waskom passed an ordinance banning abortions and abortion clinics within city limits. The ordinance, drafted with the assistant of Right to Life East Texas, only includes exceptions for rape and incest or where the life of the mother is in danger.

“And when the board made their vote it just totally erupted in applause,” Moore said of the crowded council meeting that was standing-room-only with an overflow crowd extending out the front door.

“I’d much rather Waskom be known for the beautiful parks and things we have down there,” he said. “But it’s here,” he said of the decision and the flurry of phone calls and emails both pro and con that have followed. “And we’ll do whatever we have to.”

Moore insists that the city is not trying to make a major political statement or to have Waskom become the case that eventually finds its way to the U.S. Supreme Court. He says the decision was a moral and practical one. Waskom is the first Texas city on the Louisiana border on highways 80 and 20.  And Right to Life East Texas told them there were rumors that a Shreveport abortion provider, faced with tightening abortions restrictions in Louisiana, was considering setting up shop in Waskom.

“The only thing we were wanting was stopping an abortion clinic from coming to the city of Waskom. That was it,” Moore said.

“A large percentage of people were behind this proposal and wanted to make sure an abortion clinic did not locate here. And we are willing to do something about it,” said Dr. Ivy Shelton, senior pastor of First Baptist Church Waskom. “Life is sacred to us. So we want to be pro-life across the spectrum.”

Within weeks a billboard, paid for by NARAL Pro Choice Texas Foundation and the Lilith Fund for Reproductive Equity, was up on Highway 20 near the west side of Waskom. It reads “Abortion is Freedom” and directs people to needabortion.org.

In a statement sent to WFAA this past weekend in response to the mayor of Mineral Wells and his plan to present a similar ordinance in his city, NARAL Pro Choice executive director Aimee Arrambide said:

“Every Texan, regardless of income or geographic location deserves access and has a right to the full range of reproductive healthcare, including abortion. Just like the Waskom ordinance, the proposed Mineral Wells ordinance is a dangerous attempt to undermine Roe v. Wade and disregards the fact that the majority of Texans believe abortion should remain legal.

At a time when the fundamental freedoms protected by Roe are under attack, we recommit ourselves to expanding and protecting these rights for all Texans.

We will not be intimidated by these unenforceable rogue ordinances. We want Texans to know that abortion remains legal in all 50 states and all 254 counties in Texas. “

“They can call it whatever they wish. It does not matter to me,” said Moore of the Waskom ordinance. “We passed the ordinance for one reason to keep abortion clinics out of Waskom and we will fight it tooth and nail as far as we have to.”

The slogan of the city of Waskom is the “Gateway to Texas.”  It may now very well be the gateway to the next abortion battle in court.

At a Mineral Wells city council meeting Tuesday night, the council voted 5-2 to take no action on the mayor's request for consideration as a Sanctuary City for the unborn. The council was advised by the city attorney that the proposal was potentially illegal, likely exceeded the authority of the city, and could expose the city to litigation.