The projections suggest the four counties will see 800 new cases a day by early July, rather than the roughly 250 daily the counties are experiencing now. 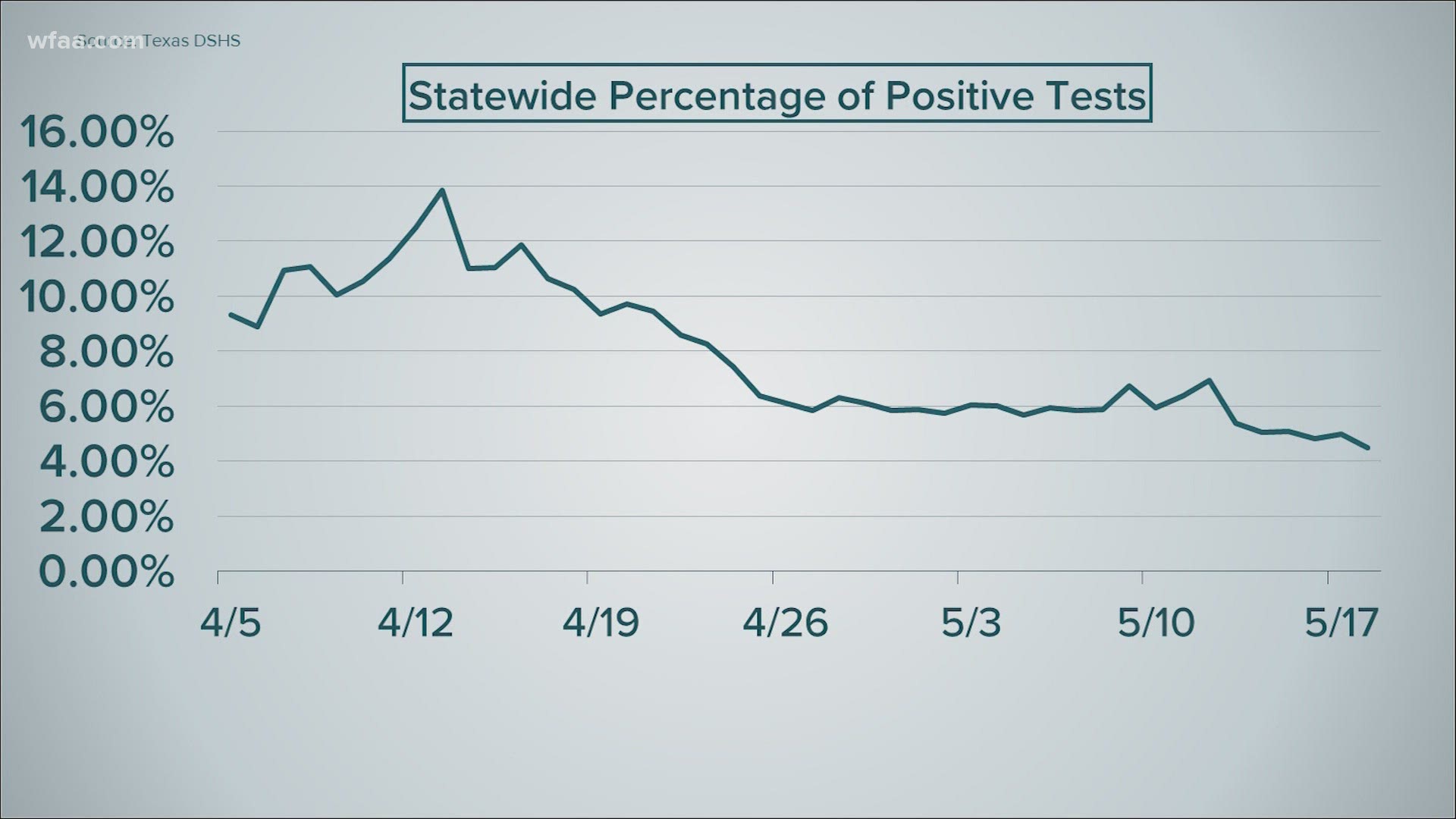 DALLAS — This story originally appeared in the Dallas Business Journal.

The number of new COVID-19 cases in Dallas-Fort Worth will likely more than double by early July even if current social distancing measures and other prevention steps continue, according to a report by the University of Texas Southwestern.

UT Southwestern’s report models the spread of the coronavirus across North Texas based on patient data from Collin, Dallas, Denton and Tarrant counties.

The projections suggest the four counties will see 800 new cases a day by early July, rather than the roughly 250 daily the counties are experiencing now, if current measures, such as distancing, wearing of masks and frequent hand washing, continue.

The current measures are 60 percent effective, according to the report. If measures were relaxed resulting in a 57 percent effectiveness rate, the number of new infections daily would jump to more than 1,000 by early June, the model suggests.

If prevention measures were increased to result in 65 percent effectiveness, cases would slowly decrease for the rest of the year, and if the measures rose to 69 percent effective, cases drop to near zero by August.

RELATED: Coronavirus statistics: Here's what you need to know about what the numbers mean

Goals of the research include making the public and policymakers aware of how behavior and policy affect the virus’ spread, which is especially important as businesses reopen, said Trish Perl, chief of infectious diseases at UT Southwestern.

Businesses should look at changes they’re making to be around for the long haul, Perl said in an interview Monday with the Dallas Business Journal.

“I think some of these measures that we’re suggesting to businesses are going to be important to become part of their culture, so that if it does come back, we’re better prepared,” Perl said. “One of our jobs now is to say, ‘If this comes back, how can we be better prepared? What do we need to have in place? What kinds of things should we be doing?’”

By implementing shelter-in-place, social distancing and other measures when it did, Dallas County prevented tens of thousands of cases, the UT Southwestern report says.

The actual number of COVID-19 cases through May 12 was 6,100. The number of infections would likely have hit 24,000 if the county had waited a week to implement changes and 93,000 cases with a two-week delay, according to one of the models in the study.

“One of the things I hear is, ‘Well, like usual, you guys over-predicted and it wasn’t half as bad as it could have been,’” Perl said. “We can look at it and say, ‘Yeah, it wasn’t (worse) because we put in all these NPI (non-pharmacological interventions such as shelter-in-place and distancing requirements).”

There are too many variables to say with certainty whether a second wave of COVID-19 is imminent in North Texas, but Perl said she thinks there will be one.

“Having watched how this virus can spread and knowing that it’s still around, I don’t think we should kid ourselves into thinking that it’s going to go away,” she said. “My personal feeling is I do suspect that we will have more waves.”

She said predictive modeling of this type is a relatively new approach to analyzing patterns of infectious disease.

“Forecasting has been used a long time in economics, but not really in infectious disease outbreaks,” Perl said. “It really started with H1N1 in 2009 and then came into its own with Ebola. This is the first time it’s been used real-time in a pandemic like this.”