The winter storm hit North Texas hard. Why our trees are paying the price again

For some North Texas trees, like live oaks, the response time to a damaging weather event, isn’t always immediate. 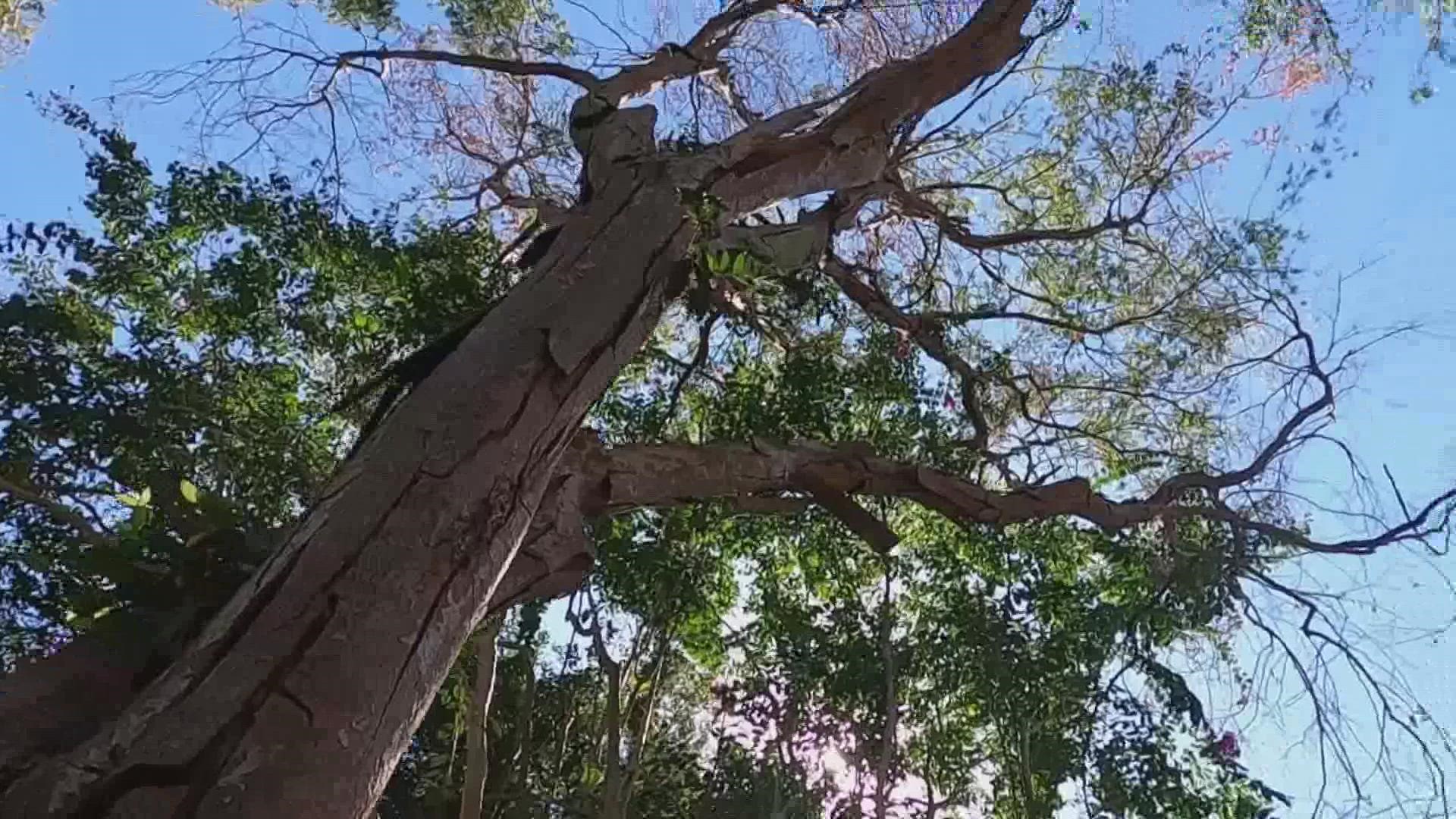 DALLAS — This year's February winter storm was a nightmare for many Texans: Power outages, frozen and burst water pipes and overall life-threatening conditions across the state.

Here in North Texas, we spent 139 consecutive hours below freezing between February 13 and 19. That was the 5th longest stretch on record.

Believe it or not, the record streak was actually more than twice as long. In December 1983, we had 295 consecutive hours below freezing in Dallas-Fort Worth. It got so cold, for so long, that you could walk across a frozen White Rock Lake.

But there's a reason why the 1983 freeze didn't have nearly as long of an impact on our landscape as what we're seeing this time around.

The proof is in the trees.

"A December freeze in many ways would have been a lot easier on a lot of these trees," said Hannah Edinburgh, an arborist with Texas Tree Surgeons. "The problem that some of them experienced was they were about to put out new leaves and the buds were full of water, and they were ready to go."

For some trees, like live oaks, the response time to a damaging weather event, isn’t always immediate.

RELATED: What's that tree in your backyard? How to identify it by its leaves

“Some of them did great," Edinburgh said. "Some of them were completely dead immediately after the freeze.”

In fact, some trees are just now showing signs of distress and others may take even longer.

"A freeze event like this?" Edinburgh said. "It's going to be 2 or 3 years before we even know if some of these trees are going to make it long term."

The added stress of the recent heat and drier weather really points out which trees need help.

"The general consensus was that we would wait through the summer and see how the trees would recover," Plano City Forester Marc Beaudoing said.

The city of Plano has identified 6,500 trees with potential damage from the freeze.

"Some of the species that have been really affected by the storm are ash trees, Shumard Red Oak trees, Lacebark Elm, and Chinese Tallow. We’ve seen significant damage on those," Beaudoing said.

There’s no need to panic. There are many signs YOU can look for now that can help you save any potentially damaged trees.

"Dead branches, a much thinner canopy than usual," Beaudoing said. "Lighter green leaves than they should have. and really a greatly reduced canopy is the biggest sign, the biggest stressor.”

Overall, there are three main warning signs to look out for:

Thinning canopy: This might be the most visible warnings sign -- dead branches and a much thinner canopy, including leaves that are lighter green than they should have.

Epicormic shoots: These are the little sprouting shoots that grow in places they normally wouldn’t like the bark or trunk.

Frost cracks: These are the most sinister of warning signs -- vertical splits that can run deep into the wood of a tree. They form because of the expansion and contraction of water in the tree during a hard freeze and thaw.

OK, So you’ve identified you may have a problem. Now what do you do? Your best bet is to call a certified arborist so they can properly evaluate your trees.

"Right now, there is still time to evaluate it, fertilize if that is the situation that is going to help," Edinburgh said. "Evaluate if it’s at risk for insects from freeze thaw cracks and dead branches."

Unfortunately, tree removal may be the safest and only option. If your canopy companion must come down, some cities may provide you with a newly planted pal. The city of Plano is working on a tree giveaway program for the springtime for citizens who lost trees due to the winter storm.

"It’s not the end," Beaudoing said. "We want to make sure that even though we are losing trees that we are going to be replacing a lot of trees that were lost."