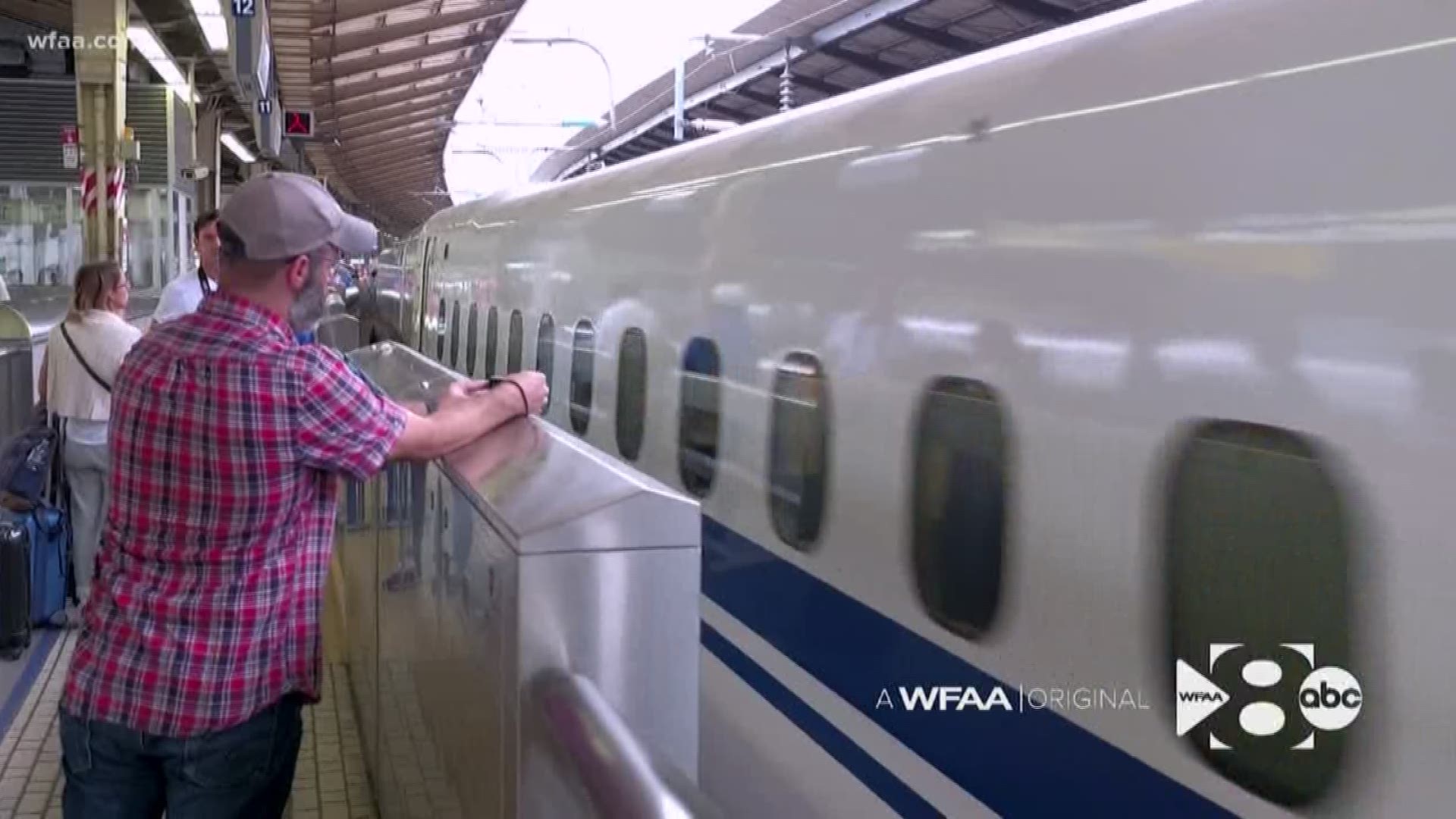 Editor's note: The above video from 2018 looks at what Texans can expect from this type of high-speed train.

DALLAS -- The developer seeking to connect Houston to North Texas by high-speed rail has added a new partner.

Texas Central announced Thursday that it has signed an early works agreement with train system installation firm Mass. Electric Construction Co. Through the end of the year, both companies plan to outline the scope of the future agreement, including a construction schedule and cost of work. The agreement is set to be signed later this year.

Mass. Electric, a subsidiary of Kiewit Corp., will be installing the core system, signaling and communication equipment, as well as critical safety elements for Texas Central.

The core system is also a key component of Central Japan Railway's Tokaido Shinkansen N700S technology. The Shinkansen N700S train system is known as the world’s safest mass transit system and serves as a foundation that Texas Central is basing its project on.

RELATED: These 10 DFW international routes don't exist, but maybe they should

Texas Central estimates the project will create $36 billion in economic benefits across the Lone Star State in the next 25 years and create 10,000 jobs during peak construction with 1,500 permanent jobs when the train is fully operational, according to a news release. The project has been in the works since 2010.

The company estimates it will cost $15 billion to build the 240-mile train line while outside estimates have come in as high as $20 billion. The project is backed entirely by private investors, including former Houston Astros owner Drayton McLane Jr., who was appointed as chairman in December 2017, and $300 million in loans from two Japanese entities.

Once complete, the train will have one scheduled stop between Houston and Dallas in the Brazos Valley near Roans Prairie, which is about 25 miles east of College Station.

The bullet train will travel at speeds up to 200 miles per hour with a 90-minute travel between North Texas and Houston. Construction on the route could begin as early as next year and will take five to six years to complete.

“The Shinkansen total system approach has created performance unparalleled in the industry, having transported over 10 billion people safely,” said Texas Central CEO Carlos Aguilar in a prepared statement. “Marrying the experience of Mass. Electric with the dedication to safety of an integrated system, brings the project one step closer to construction and operation.”

RELATED: How hard could the next recession hit Dallas' housing market?

Mass. Electric has completed over $4 billion in transportation projects across the U.S., including Dallas' DART Green Line.

In early September, Texas Central signed a contract with a joint venture between Italian firm Salini Impregilo and its U.S. subsidiary Lane Construction Co. to supply the civil and infrastructure scope for the project. That includes design and construction of viaduct and embankment sections, installation of the track system and the buildings that will house maintenance equipment located along the route. One portion of the project not covered by the contract are the three stations along the train's route.

In 2017, Texas Central said that Lane would "have no equity or ownership stake in the project and will not be involved in land acquisition," when it announced an agreement that Lane and a subsidiary of Irving-based Fluor would be the preferred design-builder of the project. The agreement with Fluor Enterprises was for "a specific phase they were tasked with and that work has since been completed," according to a spokesperson from Dallas-based agency LDWW who is authorized to speak on behalf of Texas Central.

International railway company Renfe was named as the bullet train’s operating partner in late 2018. The Spanish company brings more than 25 years of experience in operating high-speed trains in Europe and other countries.

Aguilar was named CEO of Texas Central in December 2016 when the company's first CEO, Tim Keith, moved into the role of chief investment officer for the high-speed rail project.