The group - including some employees from other airlines - showed up Monday with signs calling for 'jobs, not jabs' and 'freedom, not force.' 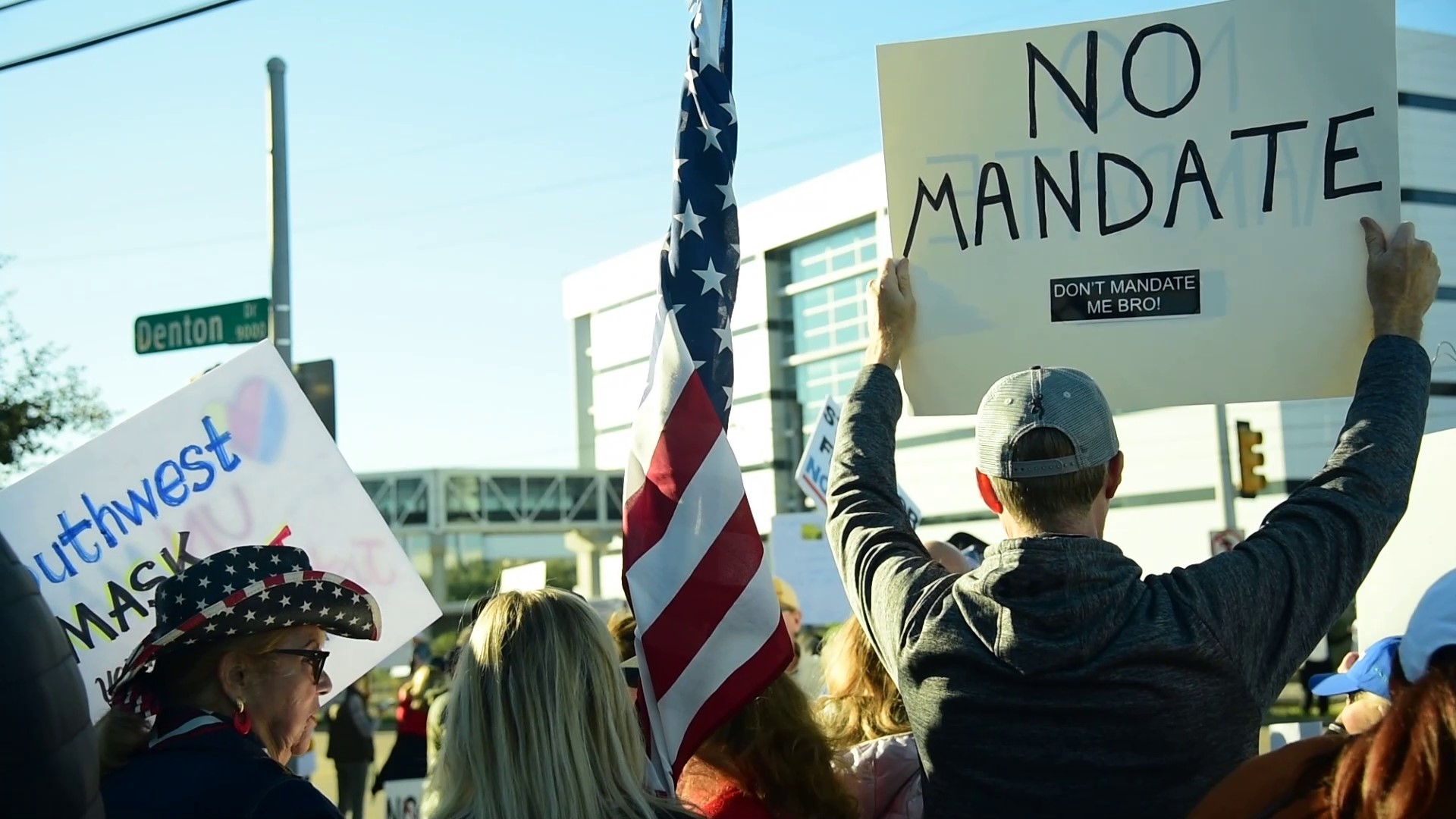 DALLAS — A small but vocal group of Southwest Airlines employees held a protest outside of the company's corporate headquarters in Dallas Monday with a message: "stop the mandate."

Southwest is one of many companies requiring employees to receive a COVID-19 vaccine, following the recommendation the Biden administration for employers with more than 100 employees do so.

But the Southwest Airlines Pilots Association, which represents about 9,000 pilots, is asking a federal court judge to issue a temporary restraining order to stop the airline to move ahead with its Nov. 24 deadline for vaccinations.

The group - including some employees from other airlines - showed up Monday with signs calling for "jobs, not jabs" and "freedom, not force."

"We are here to encourage Southwest to fight for employee freedoms, and the right to choose without losing your job,” said one employee.

Texas Attorney General Ken Paxton also joined in the protest against the mandate, telling WFAA that "it's up to (employees)" to get the vaccine.

But Dr. James McDeavitt, the executive vice president and dean of clinical affairs at Baylor College of Medicine, said getting vaccinated "helps protect you, more importantly, it helps the protect the guy sitting next to you."

"When you’re in a consumer-facing environment - like health care, like an airline - when the public is coming in contact with people, or people are in crowds, that’s where the virus will spread," McDeavitt explained.

"I think from a public health perspective, it makes a lot of sense,” he added.

Data shows that vaccine mandates are actually popular with a majority of Americans. A recent Gallup poll found 58% of Americans support Biden's COVID vaccine mandate even as many politicians, including Texas Gov. Greg Abbott, issue orders banning them.

Southwest is just one of many airlines requiring vaccines. Dallas-based American Airlines is also requiring its employees to get vaccinated against COVID-19, as is United Airlines.

RELATED: Vaccine requirements are leading to more vaccinations, not layoffs

Southwest issued a statement in response to the protest saying it "acknowledges various viewpoints regarding the COVID-19 vaccine" and has "always supported, and will continue to support, our employees’ right to express themselves."

"During the past 19 months, we’ve all fought together so no employee would lose their job due to the pandemic, consistent with our unprecedented 50-year history of job security for our people, and the last thing we want is for that to change as a result of the government vaccine mandate," the statement continued.

But for the employees who were gathered Monday, many said they were standing their ground, saying they’re not afraid to walk away from the job.