Friends and family haven’t heard from Marisela Botello since the early morning hours of Monday, Oct. 5. 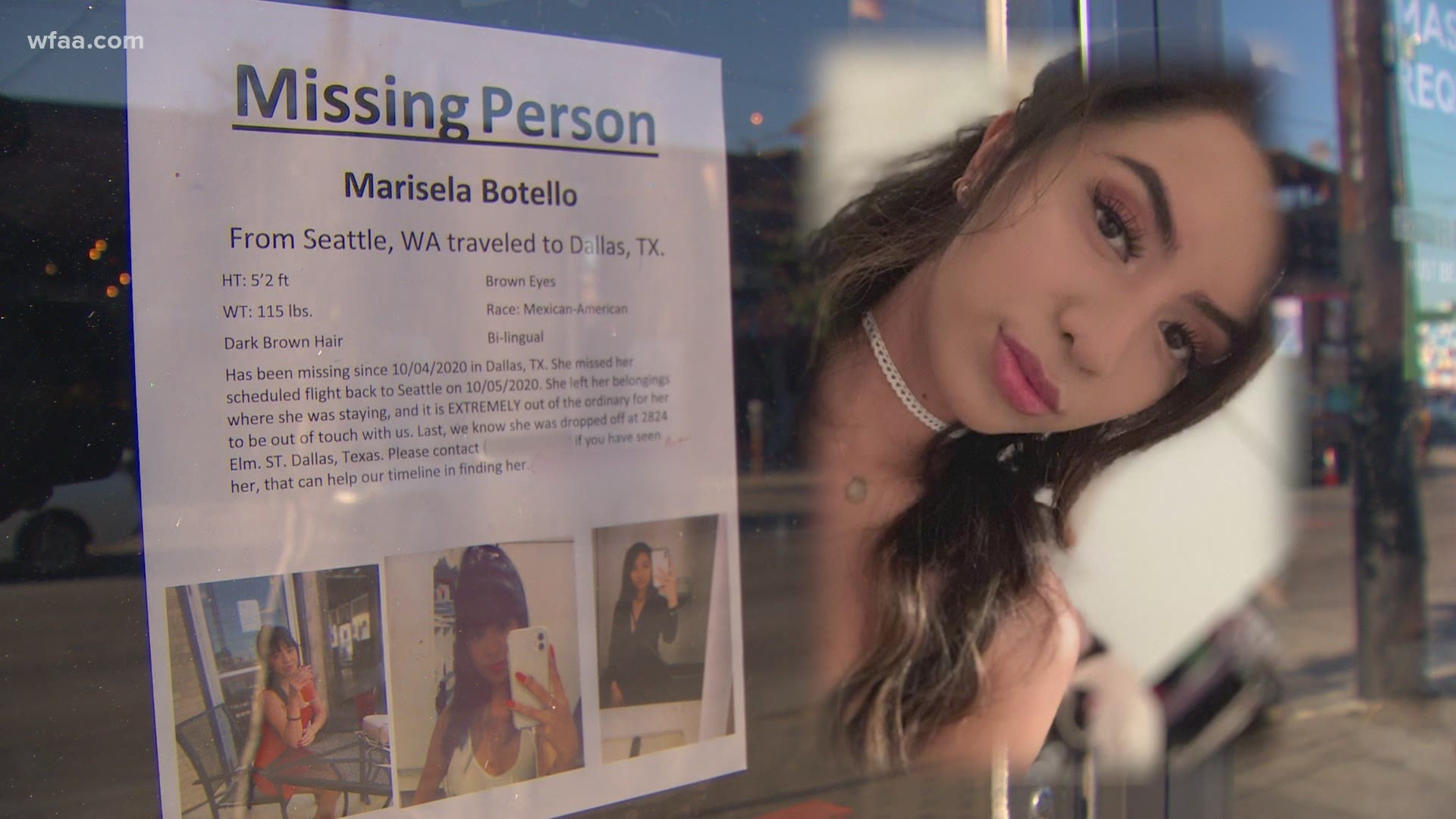 DALLAS — Friends and family in Seattle are desperately hoping for the safe return of 23-year-old Marisela Botello. Botello visited Dallas the first weekend in October and hasn’t been seen since the last night of her trip.

Friends and family haven’t heard from Botello since the early morning hours of Monday, Oct. 5, when she was supposed to return home to Seattle.

Her family says Botello arrived in Dallas on Oct. 2 to visit an ex-boyfriend and was scheduled to return.

“We were just trying to spread the word, we want some answers, we want to bring our friend home,” Patrick Helmbrecht said. “She would definitely get ahold of one of her friends or family for sure. She’s on her social media a lot and it’s 2020 so it’s not hard to get ahold of somebody if they were well.”

Helmbrecht made the drive from Seattle looking for Botello. He spent his Sunday hanging posters in Deep Ellum.

Her family has a Lyft receipt showing she was dropped off on Elm Street just after midnight on Monday morning, Oct. 5. She went to the Deep Ellum bar Select Start and surveillance video captured her leaving the bar wearing a purple dress. The 23-year-old Hispanic woman hasn’t been seen since.

Castillo said she was able to get into her niece's T-Mobile account and determine that Botello used her phone at 4 a.m.

“And from there she just never came back,” Castillo said. “And that’s around the same time also that we saw the last cell phone activity, last time her debit card was ever used.”

“Her flight was Monday morning and she never returned,” Castillo said. “Today has been a week and there’s no sign of her.”

Her family says she has distinctive features, including a mole on the center of her neck and a tattoo on her right hand.

The family has filed a police report with the Dallas Police Department and has been assigned a detective to their case.

Botello’s family and friends have flown into Dallas throughout the week to search for the Seattle native.

“She’s not a new traveler, which is why this is all so odd to us that this happened to her, because she’s always in contact, always in contact with the family, at least one of us letting us know what she’s doing,” Castillo said. “So for us to not know anything, she fell off the face of the earth, it’s completely, it’s worrisome, we know that something is wrong.”

Helmbrecht said he will continue searching this week for Botello.

“I just been hanging posters up and going to all the local bars and restaurants around here and seeing if they can hand it out to their staff and post it on their social media for me,” Helmbrecht said. “She’s just good people. Never done anyone wrong.”

If you have any idea about Botello’s whereabouts, please call the Dallas Police Department at 214-671-4243.

“Hopefully we get to bring her home,” Helmbrecht said. “We just want some answers at the very least, what’s going on, where she’s at.”

The family has set up a GoFundMe here.