List: These cities in North Texas are still under a boil water order 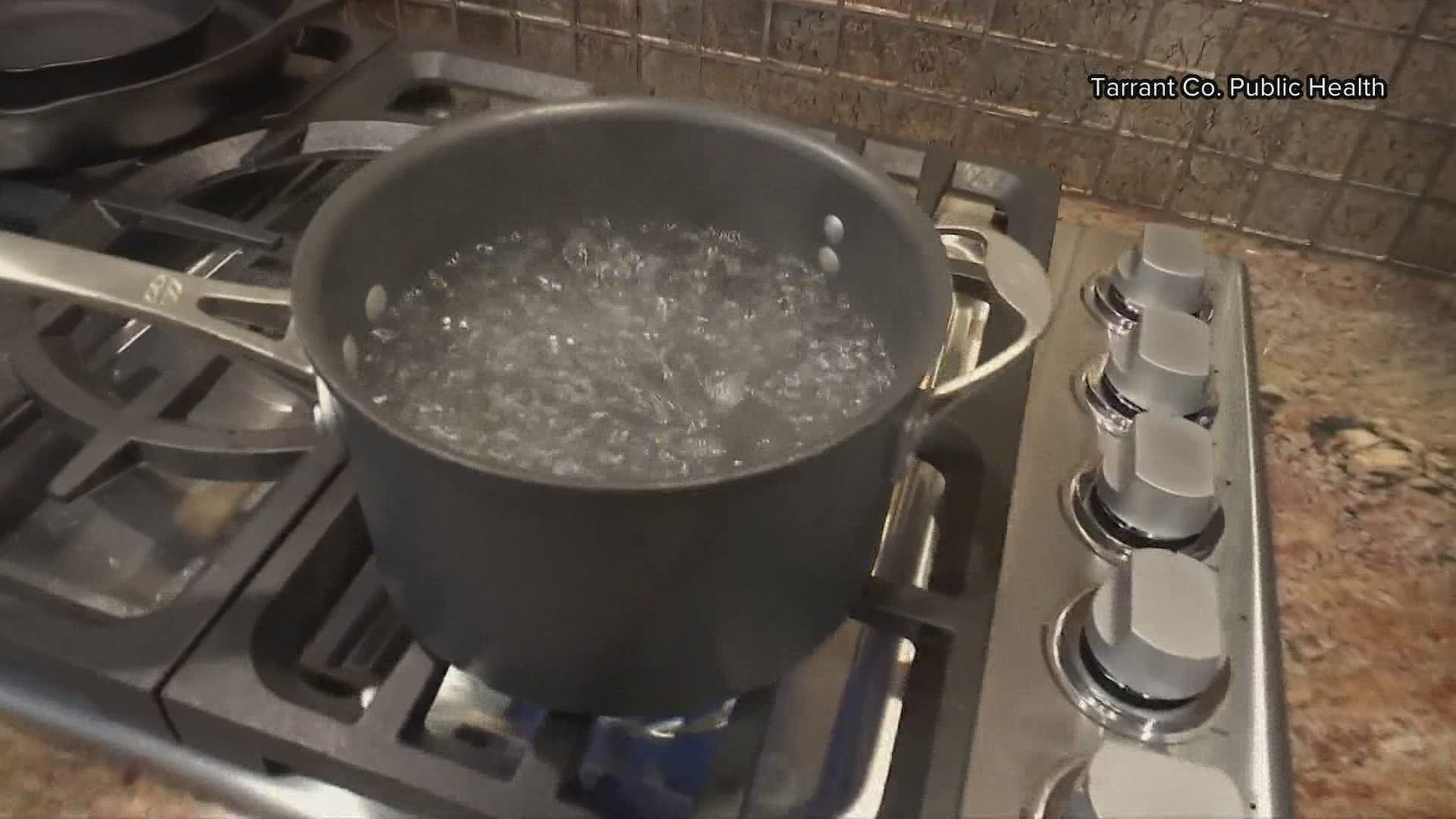 Many cities in North Texas are under notice to boil their water prior to consumption, including washing hands/face, brushing teeth, and drinking.

Those affected should boil their water vigorously for at least two minutes before letting it cool to be used or consumed.

The power outages across the region have impacted water treatment plants in several areas, which is forcing cities to issue boil orders.

Each entity has to get the water tested with a bacterial sample before the boil water notice can be canceled. It could take up to 24 hours for that sample test to be complete.

The Benbrook Water Authority said customers should boil water prior to consumption.

Children, seniors, and persons with weakened immune systems are particularly vulnerable to harmful bacteria, and all customers should follow these directions.

The general area affected is bounded by Loop 820 to the north, Bryant & US 377 to the east, and City limits west and south.

Water for drinking, cooking and ice making should be boiled and cooled before consuming.

The City of Boyd in Wise County issued a boil order Tuesday night for all of its residents.

The cities of Ector, Leonard, Savoy and Windom in Fannin County are all under a boil water order as of Wednesday.

People who live in Fort Worth are no longer under any boil water notices, city officials announced Sunday.

Cities that are customers of Fort Worth and were affected, however, still have to get their own orders lifted by state officials, the city added. Water customers in Aledo, Westover Hills and White Settlement should check with their own providers.

Earlier in the week, these other cities were also placed under a water boil order: Haslet, Keller, Lake Worth, Northlake, Roanoke, Saginaw, Southlake, Trophy Club, and Westlake.

The City of Greenville has issued a boil water order and it will remain in effect until further notice. Officials said due to the power outages, they are unable to maintain adequate pressures in their systems.

Due to a power outage at a water treatment plant, the City of Haslet is under a boil water notice prior to consumption.

If you have questions concerning this matter, you may contact the water utility at 817-439-5931.

Officials were able to get the system somewhat restored overnight Tuesday in Wednesday, but a boil water order is still in effect for Keller residents as water pressure returns to at least a trickle for most homes.

Officials ask that residents leave faucets closed as often as possible Wednesday morning to help their system refill and pressurize. Demand will slow down their efforts to return the system full online.

Officials said due to unprecedented demand causing a drop in system-wide water pressure, residents in Kennedale must boil their water prior to consumption until further notice.

The City of Lewisville issued a boil-water notice Thursday for one water service area because water pressure has dropped below the safe standard of 20 psi.

Officials said the boil-water notice only impacts Lewisville water customers and Denton County Fresh Water Supply District #1 water customers located within the area shown on the map below. Approximately 3,500 Lewisville residents are in the affected area.

The city said the public will be notified when the boil-water notice is lifted, but it's expected to last at least 72 hours or longer.

The district has issued a boil notice for some of its customers, officials said Thursday. The problem stems from the fact that its supplier, the Upper Trinity Regional Water District, is unable to send enough water to supply their system.

The areas under the boil notice are:

The city of River Oaks in Tarrant County is still working to restore water service after issuing a boil water advisory Wednesday..

The city's water plant had to be shut down because intakes from Lake Worth froze, officials said, and the city's emergency backup, the city of Fort Worth, is dealing with their own water supply problems. Water pressure dropped below 20 PSI, leading to the boil water advisory.

Residents can contact city hall for help getting water.

The city of Springtown in Parker County issued a boil order Tuesday night after losing power at water facilities. They are also asking residents to conserve water as much as possible until power is restored to their facilities to prevent a possible water outage.

RELATED: How to stay warm in extreme cold if your power goes out