Bryan Riser's wife and attorney believe that banking records and other evidence they've gathered will be key to exonerating him. 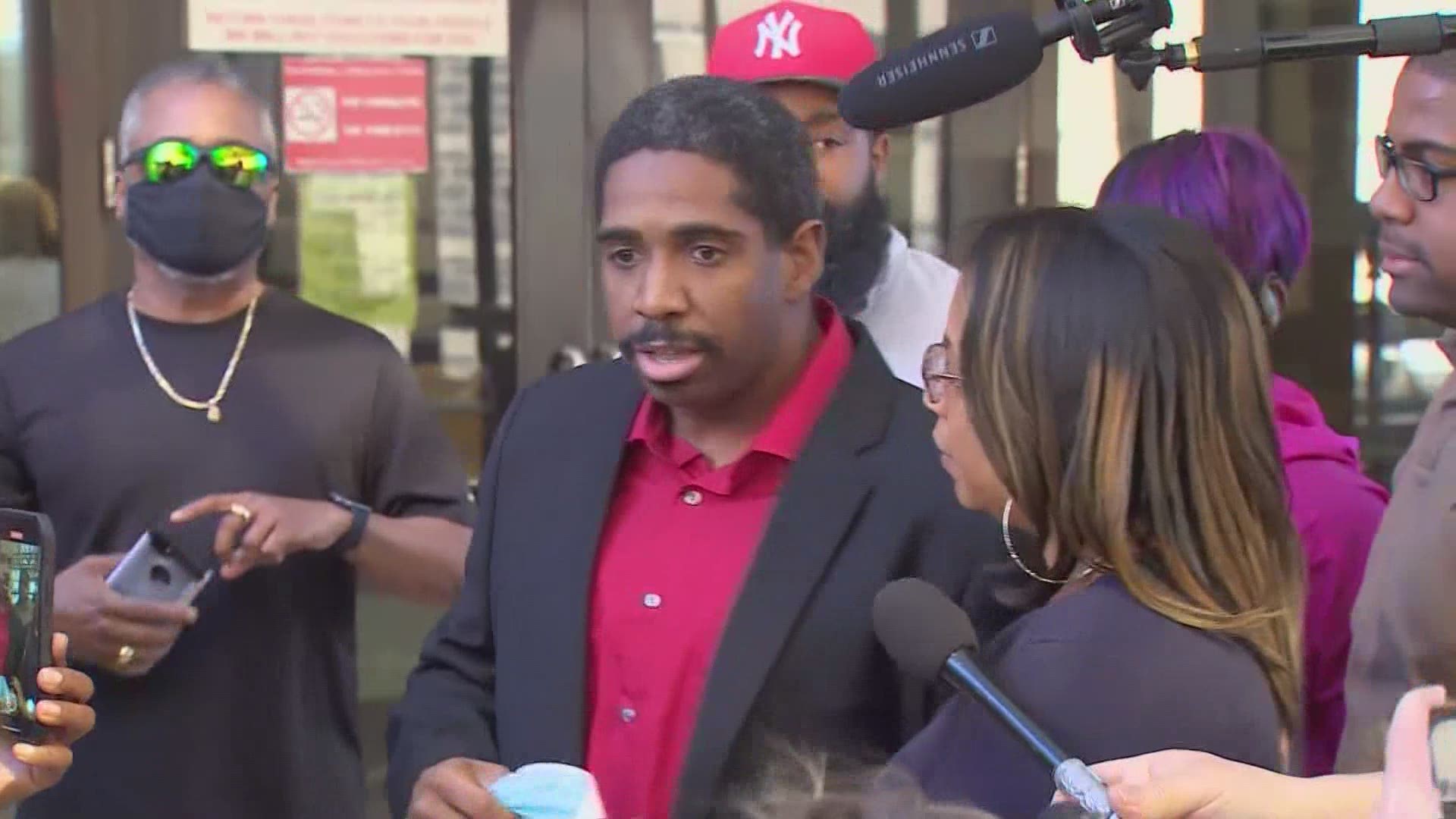 DALLAS — Updated at 10:50 p.m. Editor's note: This story previously misidentified the district attorney at the hearing.

Former Dallas police officer Bryan Riser was released from jail Wednesday afternoon wearing the same red shirt as he did when he was booked in a month ago.

Riser was released around 4:50 p.m. and several journalists were waiting outside the courts and jail building.

"This department that I used to love, respect, they have disrespected me, they have embarrassed my family all over a make-believe lie," Riser said. "I was 100% innocent from the get-go."

On Wednesday, Judge Audrey Moorehead ordered his release and ruled there is no probable cause to hold Riser on two counts of capital murder.

At times, Montenegro and Fine grew combative with each other during the hearing.

Normally, a police detective would be considered the state’s witness, but it was clear that Montenegro and Fine were not on the same page.

Montenegro adamantly argued that he believed there was sufficient probable cause for the arrest. Fine disagreed, saying he did not believe that police had enough probable cause.

JUST IN: former @DallasPD officer Brian Riser has been released from jail after a judge found no probable cause to allow his 2 capital murder charges to continue.

He said DPD has disrespected him, embarrassed him, and then quickly left.

Arrest warrants for Riser’s arrest show police based much of their case on the word of Emmanuel Kilpatrick, a convicted killer.

Kilpatrick had been in jail for about two years when he came forward in August 2019, claiming that Riser had hired him to kill Lisa Saenz and Albert Douglas.

Saenz had lived with his Riser’s father, Byron. Kilpatrick told police that Riser believed she was an informant.

Shook said Kilpatrick had every reason to lie.

As it stands, he will one day be eligible for parole.

Saenz was killed hours March 10, 2017, hours after leaving court on the day that her husband was convicted of murder. Montenegro was the detective on her husband’s case and identified her body when it was found by kayakers in the Trinity River.

By all accounts, Riser and Kilpatrick did know each other. They had attended the same high school.

Montenegro testified that he believed cellphone and text message evidence back up Kilpatrick’s account.

Kilpatrick claimed that he met Riser in a donut shop in February 2017, where he offered to pay him $3,500 to kill Douglas. He said Riser then drove him around in a black SUV and showed him where to find Douglas. After the killing, he said he texted the address where Riser could pay for the hit.

However, both the defense and prosecution said in court that the dates of the cellphone data and the text messages do not line up with Kilpatrick’s account.

Riser also never owned a black SUV, although Montenegro testified that he could have borrowed a vehicle.

Shook also pointed out that Riser lived in the area at the time, so cellphone data showing him in the area didn’t necessarily mean much.

Plus, Montenegro testified police do not have Kilpatrick’s cellphone data from February 2017 to compare with Riser’s from that month. By the time, police realized they needed that data two years later, it no longer existed.

Police believe Douglas was killed on Feb. 25, 2017, because family members told investigators that he rode away on his bike and never returned.

Testimony in court showed that Montenegro and other police officials met with the DA’s office in December 2019.

During that meeting, police outlined their case against Riser.

Fine said in open court that prosecutors told police officials that there was not sufficient probable cause to arrest Riser and that investigators needed to continue working on the case.

He also pointed out said that under Texas law, police cannot prosecute a person solely on the statement of an accomplice. Investigators must be able to back up those statements with evidence. Otherwise, it’s inadmissible.

During questioning, Montenegro acknowledged that police had not gathered any new significant evidence at the December 2019 meeting.

But when Garcia assumed command, the case was given a fresh look.

Montenegro said he had not planned to arrest Riser at that point, but a decision was made above him that to move forward.

“Mr. Fine, you got to understand, you got a boss,” the detective said. “I got a boss as well. I cannot speak for myself. When he was briefed, he made the decision.”

Montenegro was also asked to explain errors that were made in his original warrants.

He attributed the most serious error in the original warrant to a “cut and paste error.”

The original warrants, signed by a judge in March, said a preliminary analysis from the FBI "revealed that the suspect's cell phone placed him in or about the area during the time frame" of both victims' disappearances and subsequent killings.

Instead, the new warrants now claim the cell phone data analysis from the FBI shows Riser and Kilpatrick's cell phones were in the area where Kilpatrick says he met with Riser to "plan the kidnapping and murder" of the two victims.

“I made a mistake,” Montenegro said.

However, it was a mistake that he only corrected after it was pointed out by prosecutors. For a month, that mistake was had been reported publicly in police records.

“I don’t know how you can make that kind of mistake,” Shook said after the hearing.

It came also came out during the hearing that police officials had met with the DA’s office last week and were told that the stance of the prosecutor was that there was not enough probable cause to go forward.

Prosecutors suggested that police withdraw the warrants on Riser, which they did not do.

In the second set of warrants, Montenegro also wrote that a man named Kevin Kidd, who was arrested along with Kilpatrick in 2017 in connection with the killings, had “tentatively” picked Riser along with another “filler picture” as being the person he had seen at his house with Kilpatrick.

Asked how sure Kidd was, Montenegro testified that Kidd said he was between 25 to 40% sure.

“That’s not real solid is it?” Shook asked.

“It’s not,” the detective agreed.

Kidd, like Kilpatrick, is a confessed killer. He admitted being involved in the killing of Saenz, Douglas, and others.

Three days after Saenz was killed, Riser contacted a homicide detective on March 13, 2017. In a voicemail, Riser told Stewart that he had received a call on his personal cell from an “unknown male who told him he had gone to high school with him.” That person wanted to speak with a detective about the murder of the father and son that had occurred on March 11.

In the voicemail to Stewart, Riser left the phone number of the person who’d called him and said that he did not recognize the voice and that the person had refused to identify himself.

Detectives later determined that the phone number Riser left on the voicemail belonged to Kilpatrick.

During the hearing, Montenegro testified that he believed that Riser knew that the caller was Kilpatrick. He said Kilpatrick told investigators had Riser had made the call to direct attention away from Kilpatrick.

However, as Shook pointed out at the time that Riser made the call to homicide Kilpatrick was not yet a suspect in the killings.

“We do have to apply common sense when it comes to investigating cases,” Shook told Montenegro.

The detective replied, “Not when it comes to investigating criminals.”

Montenegro testified that since Riser’s arrest, he believed there were three jail calls between Riser and family members that investigators believe was not that “of an innocent man.”

In his closing statement, Fine told the judge that DA’s office had an obligation to ensure justice was done.

The district attorney's office released a statement after the hearing saying while there is insufficient probable cause in the two capital murder cases, that does not mean the investigation is closed.

"We look forward to continuing our work with the Dallas Police Department on this or any other cases that are investigated in the city of Dallas," Criminal District Attorney John Creuzot said in a written statement.

The department said while they respect Moorehead's decision, "it is important to note that investigators followed the legal process and presented two probable cause affidavits to a Dallas County District judge for review, and sufficient probable cause was found."

The department also said Bryan Riser was terminated for administrative reasons as well as the criminal investigation.

Riser’s brother, Byron Riser Jr., who is a sheriff’s deputy, said he never doubted his brother’s innocence. He attended the hearing with his brothers’ wife, Eboni Samuel Riser. She spoke to WFAA after the judge’s ruling Wednesday afternoon.

“We’re so excited, we’re so happy because the truth is finally coming out and that’s what we’re here for, is the truth,” she said.

“DPD owes us an apology at this point,” Eboni said. “How do you restore someone’s credibility? Can he get a job now? There’s so many other things, the case needs to be completely closed.”

Shook said he hopes lessons have been learned from what happened in this case.

“People hammered on former police Chief (Renee) Hall because Bryan Riser was still working and she said that that time well there wasn't enough evidence, well I think this hearing proved her decision correct,” he said.