We had vaping products tested in a lab. Here's what we found.

Many who vape say it's safer than smoking cigarettes. But what's really in e-cigarettes? We hired a lab to help us find out. 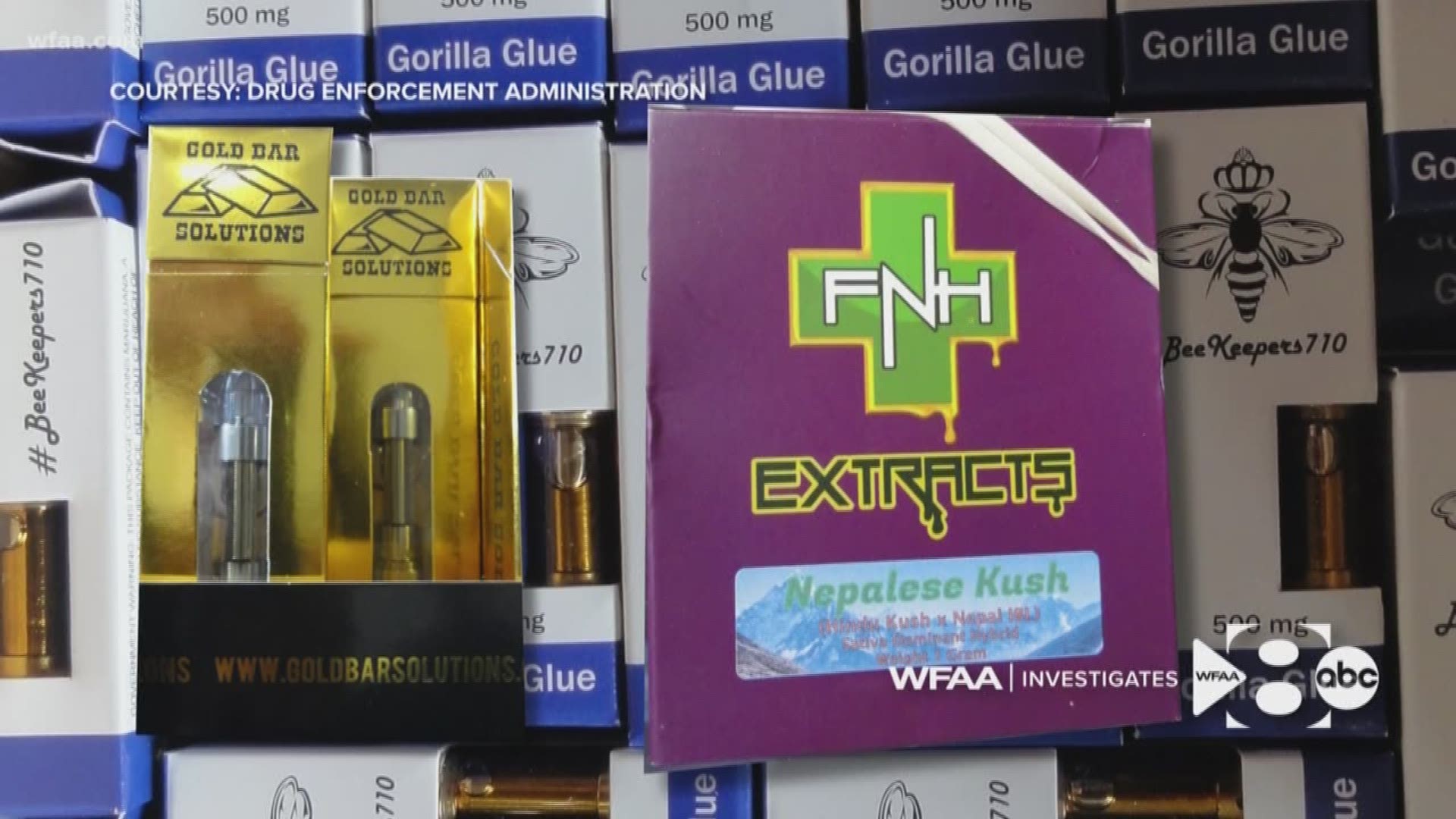 Nationally, 34 people have died and 1,600 have gotten sick from e-cigarettes, and the numbers keep climbing, according to the Centers for Disease Control. Texas has so far had one death and 147 injuries, state health officials say.

Many of those killed and injured vaped THC. Some, however, only vaped traditional products you can buy in a store.

Besides what’s listed on the packaging, we wanted to know what’s in this stuff.

We decided to find out.

We partnered with our sister TV station in Portland, KGW, to have some popular types of e-cigarettes tested in a lab.

Credit: WFAA
We had these six vaping products tested.

We bought six different vaping products – including some containing nicotine available anywhere, like at convenience stores, and some containing THC and CBD from states where marijuana products are legal.

Lightscale Labs in Portland, Oregon, tested for 130 common and problematic chemicals, including pesticides and carcinogens.

Here’s what they found:

The lab found the Juul menthol pod contained none of the harmful compounds for which it tested.

However, one mango-flavored vape product that said it contained CBD ... actually contained no CBD.

It did, however, contain lead.

There’s no national standard for a safe amount of lead in vaping products. But California regulators set their own limit. Our sample tested 800 times over that limit. The company couldn’t be reached for comment.

Credit: WFAA
Dr. Karen Schultz is a pediatric pulmonologist at Cook Children's Hospital in Fort Worth

“Lead inhaled into the lung is a carcinogen that could cause cancer,” said Dr. Karen Schultz, a pediatric pulmonologist at Cook Children’s Medical Center in Fort Worth.

She’s the doctor who treated Trystan Zohfeld, the North Texas teen in the now-viral video fighting for his life in a hospital bed as a result of vaping. We took our lab results to Dr. Schultz to find out what they mean.

Our tests didn’t include analysis of the liquid in vapor form – and that could alter the chemical makeup of what’s being inhaled, she said.

“I think one of the bigger questions when you look at the ingredients of the vaping liquid is - what happens when it gets heated,” Dr. Schultz said. “We don't know what happens to all those chemicals when they get heated and then inhaled.”

Portland State University researchers have studied what happens to liquid from a Juul pod when its heated and vaporized. That study determined that Juul vapors are in fact damaging to cells.

That study emphasized “the need to determine if Juul products will lead to adverse health effects with chronic use."

Credit: WFAA
Dr. Robert Strongin is a professor of organic chemistry at Portland State University. He is studying the health effects of e-cigarettes.

Plenty of preliminary evidence from there and from many other labs around the country show these products are not nearly as safe as advertised,” said Robert Strongin, professor of Organic Chemistry at Portland State University who studies the health effects of vaping.

Juul has questioned the reliability of testing that has found its products unsafe.

“In addition to enforcing stringent manufacturing controls, we conduct extensive preclinical and toxicological testing of the ingredients and analytes in JUUL e-liquids and aerosols, including testing for harmful and potentially harmful constituents,” Juul said in a statement. “Our testing is conducted through reputable, independent third-party laboratories and we provide the results of these tests to regulatory bodies.”

But does any of this matter to people who vape? Has this latest health scare caused folks to stop?

“I'm going to be honest, probably not,” said Andrea Burns, 19, of Dallas, who said she started vaping when she was underage. “Because it was my choice to begin with. I realized the dangers.”