Some Texas psych hospitals continue to hold patients against their will, complaints show

Three years after WFAA's investigation, recent complaints show that some private psychiatric facilities continue to hold voluntary patients against their will. 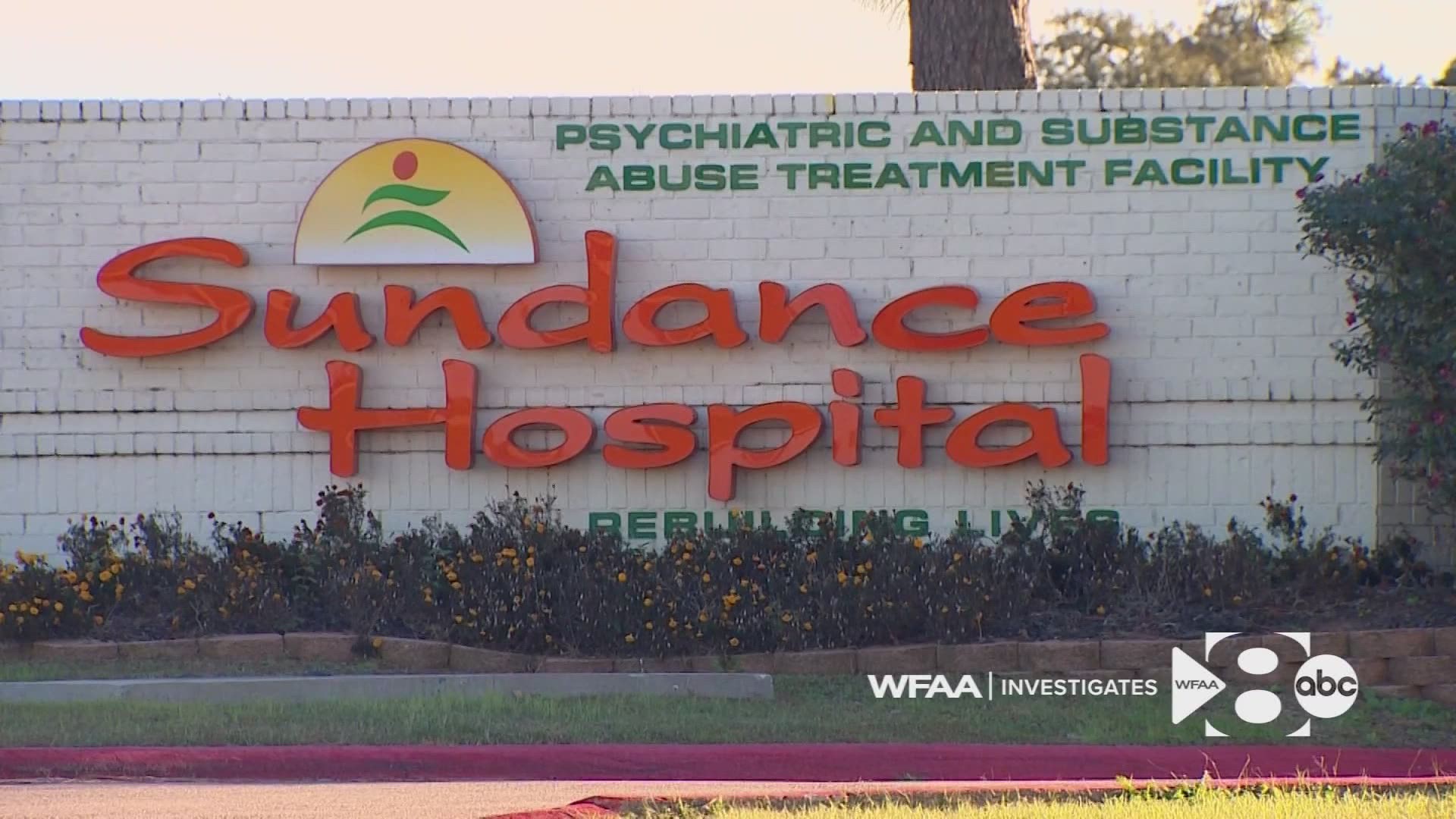 The COVID-19 pandemic has compounded emotional stress for many the past year - and more than ever, a need for quality mental health care.

However, three years after WFAA first highlighted a broken private mental health system, recent complaints show that at least some private psychiatric facilities continue to hold voluntary patients against their will.

WFAA talked to one patient who checked herself voluntarily into a private psychiatric hospital for help, but then couldn’t get out.

“I was confused and lost and I didn't know why I was there,” Elida Colunga told WFAA.

Colunga was admitted voluntarily into Sundance Behavioral Hospital in Fort Worth three years ago. Almost immediately, Colunga told WFAA she wanted to be released.

Despite two judge's orders to release her, the hospital would not let her go over her 22-day stay, according to Tarrant County officials who filed criminal charges against the hospital.

“I came out traumatized,” said Valdez about her experience at a Dallas psychiatric hospital in July.

Valdez sought help for PTSD. She checked herself into the hospital and says she was held against her will for four days.

“I saw people in there that have been in there for months and they don't know when they're getting out and it's like they're prisoners,” Valdez told WFAA.

Another patient in the same facility as Valdez filed a lawsuit making similar allegations. The former patients alleges in the suit that she made “repeated verbal requests to leave” the facility. But the staff failed to release her within four hours of her first request, and she was never given a letter to leave against medical advice.

The facility also failed to “obtain a court order of protective custody or an emergency apprehension and detention warrant to secure the legal right to hold her," she alleges in the suit.

WFAA has talked to half a dozen people who say, over the past 18 months, they too sought help voluntarily at Texas psychiatric hospitals, only to be held against their will.

Holding voluntary patients against their will is an issue WFAA first exposed in 2018.

Under state law, a psychiatric hospital can hold a patient for 48 hours for “observation.” Beyond 48 hours requires a court order.

Also, when a voluntary patient asks to be discharged from a psychiatric facility, state law requires the staff to provide the patients with a letter within four hours that allows them to start the process to leave “against medical advice.”

Yet WFAA’s investigation discovered some hospitals were not following the law.

In the case of Colunga, Sundance Behavioral failed multiple times to assist her “in creating a written request for discharge” after she informed the staff of her desire to leave, according to an indictment in Tarrant County.

A separate investigation by the Centers for Medicare and Medicaid Services further substantiated WFAA’s findings saying some hospitals were "fraudulently doctoring (patient) records” and making up "psychiatric disorders" so that they could keep patients longer "for Medicare billing."

“It is clear that there’s going to have to be some real punitive behavior or punitive laws stepping in to make sure this stops,” said state Rep. Bill Zedler, R-Arlington, who has since retired.

“What these folks have experienced is not the care that they need,” said state Rep. Stephanie Klick, R-North Richland Hills.

During the 2019 session, Zedler proposed legislation to require stiffer penalties for “unwarranted commitment” of patients in a mental health facility. The legislation would have required state regulators to increase fines from $50, to a minimum fine of $100,000.

“There was never a hearing held in the (House) Public Health Committee and I could never get any reason why,” said Zedler.

With the 2021 legislative session now underway, Rep. Stephanie Klick, this legislative session’s chair of the House Public Health Committee, tells WFAA she is refiling a bill to help break open the secrecy of psychiatric hospitals.

Unlike Zedler’s legislation from 2019, her legislation in HB 2052 would not require penalties but would instead make inspection reports public for psychiatric hospitals.

While lawmakers debate how to clean up the psychiatric hospital system in Texas, Tarrant County District Attorney Sharen Wilson has taken matters into her own hands.

In an effort to clean up the bad actors, Wilson filed criminal charges against Sundance Behavioral Hospital in 2019 alleging the hospital was kidnapping patients like Colunga.

Sundance officials pleaded guilty and paid a $200,000 dollar fine, and closed their Fort Worth facility.

“We’re not trying to scare people and … the truth is most of our psychiatric hospitals do an excellent job,” Wilson said.

While that may be true, patient advocates like Lee Spiller say more work needs to be done.

“I have no doubt people are (still) being held against their will on a regular basis. We've certainly gotten cases since your first piece aired (in 2018),” said Spiller of the Citizens Commission on Human Rights – Texas.

So, whether lawmakers will act this session remains to be seen.

But perhaps the biggest tragedy in all isn’t that lawmakers have thus far failed to deliver on their promise of change; nor that some Texas psychiatric hospitals continue holding patients against their will.

Perhaps the biggest tragedy is that when WFAA asked Valdez and Colunga if they feel safe when asking for help, their answer was an emphatic “no.”

“I don't believe in the system,” Colunga told WFAA. I think that this has been going on far too long and I think it's going to take a lot for the system to change.”

If you need help, various experts told WFAA that not all psychiatric hospitals flout the rules. Many are doing it the right way. But it's critical you know your patient rights.

WFAA has assembled a resources page with counseling and therapy options, including tips on how to keep from becoming an involuntary patient at a mental hospital if you’re only there for voluntary help.