WFAA compiled the places in Dallas with the most 911 elevator entrapment calls. Can you guess who topped the list? 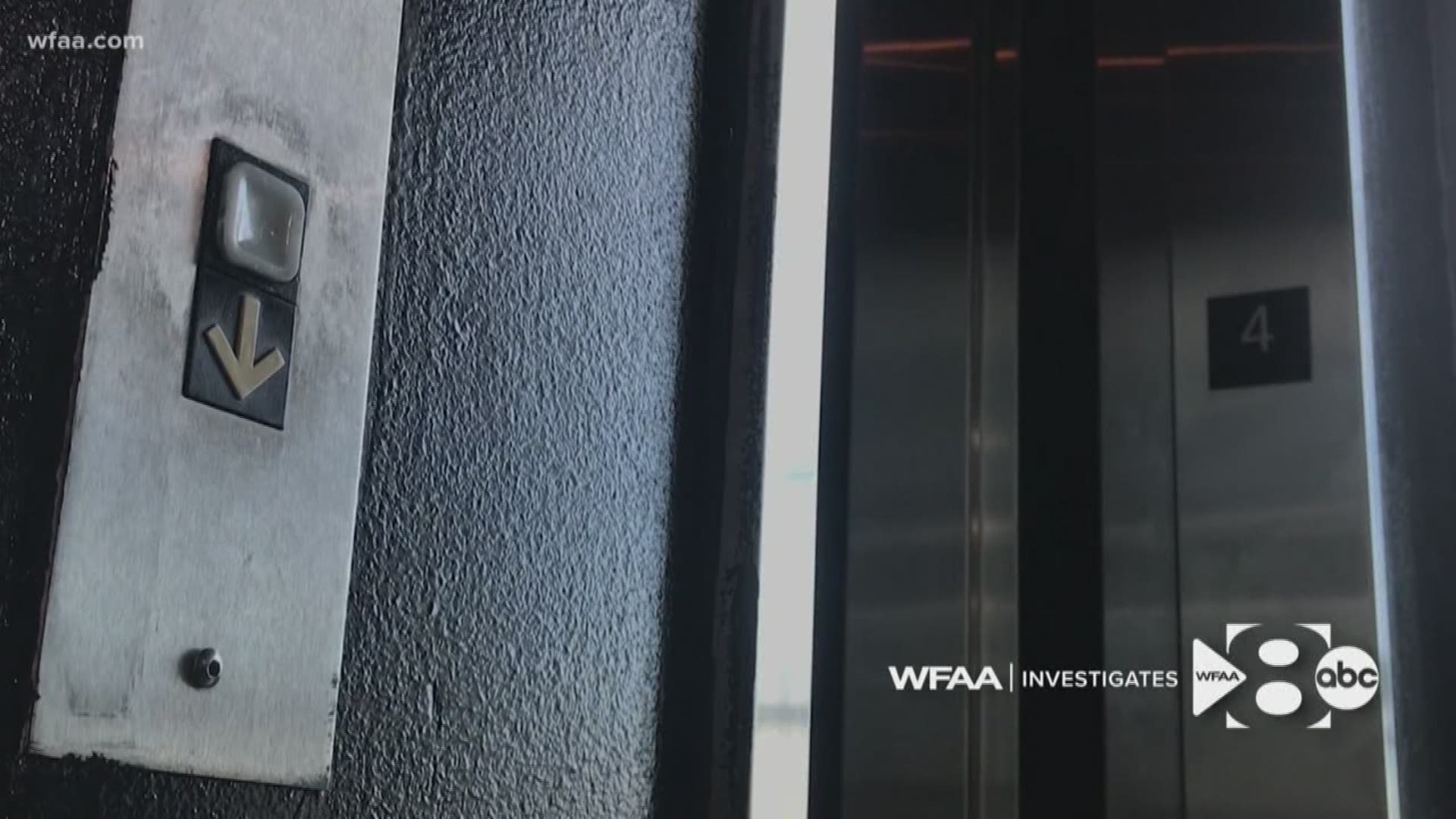 After a nurse was nearly crushed to death in an elevator at a Fort Worth hospital, state investigators blamed the incident on worn-out brakes caused by lack of maintenance.

State law requires that all elevators get inspected every year. How well do they work?

A major problem is that the state has no inspectors on its payroll. Though the state does have a chief inspector and a deputy based in Austin, neither actually completes inspections.

So who does? Texas issues licenses to approximately 150 independent contractors to inspect elevators across the state. Some have more training than others, experts told WFAA, and are of varying quality and experience.

But what is the minimum required training to become an elevator inspector in Texas? A $50 state fee and a three-day class, records show.

Sufficient? No, says Ken Pixley, an elevator safety consultant with 40 years of experience in the industry.

“The problem lies with the fact that if something bad happens with an elevator it gets really bad, really fast,” Pixley said. “So there's just no room for error.”

Millions of people ride elevators safety every year in Texas, but malfunctions can be lethal.

In 2003, a Dallas doctor was decapitated by an elevator at a Houston hospital. Dr. Hitoshi Nikaidoh died instantly when a bad wiring job caused an elevator at Christus St. Joseph’s Hospital to malfunction trapping him in the door as the elevator began to rise. A nurse was trapped in the elevator with his head as rescuers worked to free her.

The family sued and settled with the elevator company.

The U.S. Bureau of Labor Statistics says that on average, elevators kill five people and injure 940 each year nationwide.

Since 2004, nearly half of all elevator accidents in Texas happened in Dallas and Fort Worth. About one-third of those occurred at hospitals, which typically have elevators running day and night, particularly in urban areas.

“I just trusted it would work,” said Rogena Wright, a nurse at Texas Health Harris Alliance Hospital in Fort Worth who says she was hurt last year when an elevator she was in plummeted.

Credit: WFAA
Rogena Wright says she was hurt on an elevator at a Fort Worth hospital.

“I thought I was going to die,” Wright said. She is suing the elevator company, which has denied any wrongdoing.

Another nurse, Carren Stratford, was nearly crushed to death by an elevator at John Peter Smith Hospital in Fort Worth earlier this year.

The Texas Department of Licensing and Regulation’s elevator division conducted an investigation. They quickly zeroed in on the JPS elevator’s brakes, which were worn out.

Pixley said that worn-out brakes don’t happen overnight. Someone likely missed it during an inspection, he said.

“I do believe there were warning signs,” said Pixley, who is not involved in the JPS investigation but has experience with the particular elevator model that malfunctioned.

Stratford has sued elevator company, thyssenkrupp, over the incident.

“Per our corporate policy, we do not comment on pending litigation. However, the safety of the riding public is and always will be thyssenkrupp Elevator’s top priority," a spokesperson said in a written statement.

Texas Department of Licensing and Regulation enforces the annual inspection requirement. But analysis of the state’s own data shows 5,617 — or 14% — of all elevators are overdue for their annual inspection – some by years.

“The numbers are not as high as they appear,” said Tela Mange, the department's spokeswoman in Austin. “Are there too many? Yes, absolutely. … There are a lot of building owners out there who are either unaware that they need to have their elevators inspected or that don't care. And either one is a problem.”

WFAA found numerous errors in the state’s elevator database, which is littered with elevators that no longer exist.

It shows two elevators at Dallas’ Reunion Arena were last inspected in October 2008. The arena was bulldozed a decade ago.

Take Jason Manning, for example. He wouldn’t talk to us on the record, but a 2016 complaint to state regulators says he sent someone pretending to be him to do an inspection at an East Dallas storage business.

A surveillance video obtained by WFAA from the state’s investigation shows an African American man going into the business to do the inspection. Manning is white.

Manning still owes the state $5,000 in fines, which have been turned over to the Attorney General’s office for collections. He’s no longer licensed in Texas.

“I've heard of it happening and seen it happening too many times,” Pixley said of inspectors faking inspections. “I've been involved with situations like that where I had to look into inspections and I can guarantee you the inspection never happened.”

In many cases reviewed by WFAA, if the inspectors are caught, they were allowed to pay a small fine and keep their licenses.

“We can always do a better job and we will continue trying to protect the people of the state of Texas,” Mange said.

Where are you most likely to get stuck in an elevator?

WFAA pulled a year's worth of 911 stuck elevator calls to Dallas Fire-Rescue. Here are the top five locations:

We reached out to NorthPark for a comment since they topped the list. Here's what they told us: "There are a total of 34 elevators at NorthPark Center. 17 are located in the common spaces of NorthPark. The other 17 elevators are located within tenant lease lines and are under the care of our retailers, so we are unable to provide information on those particular units. Our records indicate that since October 13, 2018, we responded to 13 entrapment notifications within our common area elevators--eight of which occurred in freight elevators. No entrapments at NorthPark have ever resulted in injury.”

Do you have a tip for the WFAA Investigates team? Email us at investigates@wfaa.com.