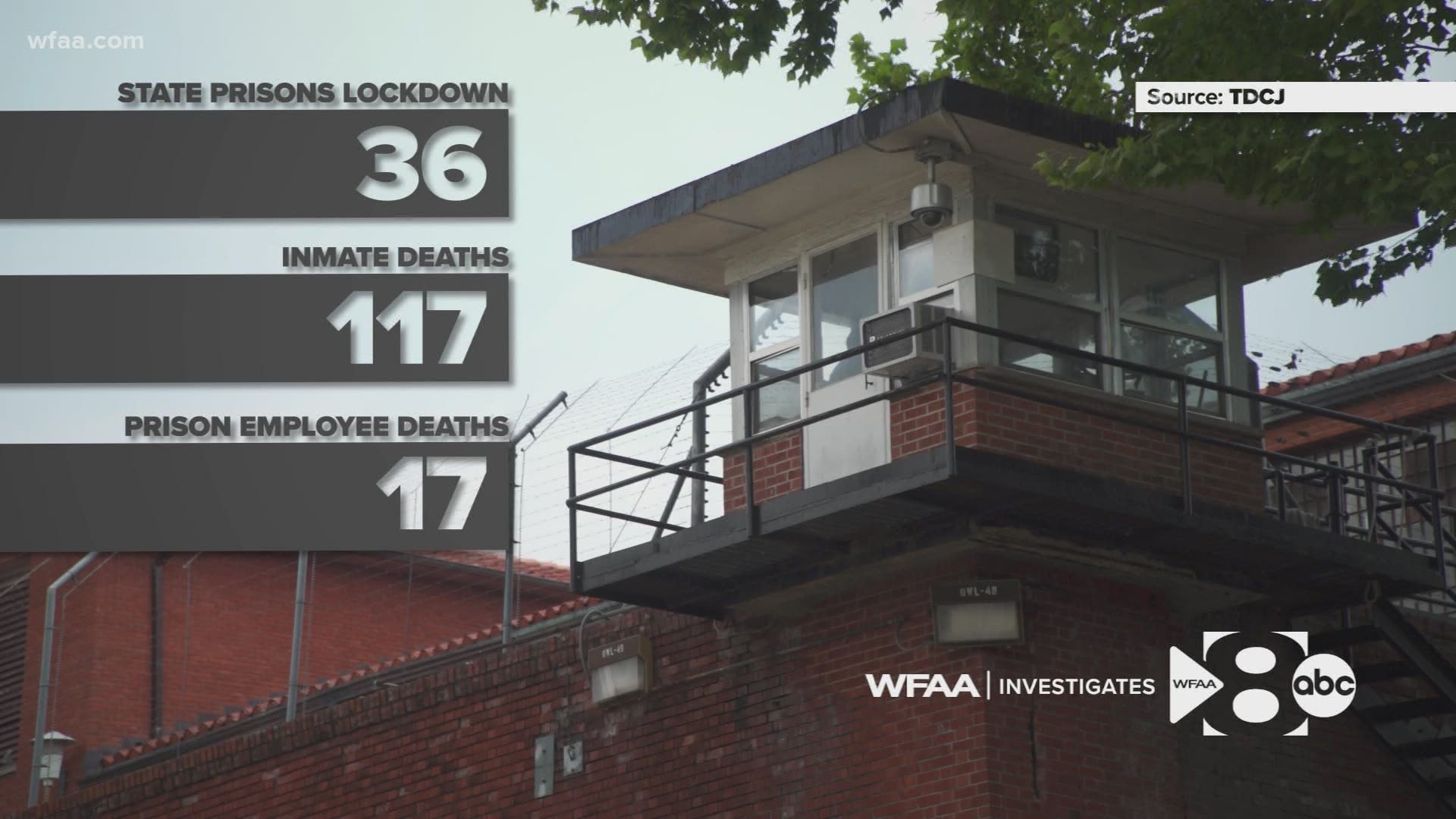 DALLAS — He thought he was going to die.

At one point, he went to the emergency room. A test showed he had COVID-19.

“I was constantly cold and sweating,” the correctional officer from East Texas said in an interview with WFAA. “It took effort just to walk, to go to the bathroom. It was just terrible.”

The officer, who spoke on the condition his identity be concealed, said he blames the Texas Department of Criminal Justice, which runs the state’s prison system, for exposing him to COVID-19.

He is of one many correctional officers from across Texas who told WFAA that they are being sent from their assigned prison units, to work at other units where the virus is running rampant. They say the understaffed prison system is putting their lives at risk by continuing this practice.

In his case, his unit did not have any cases of COVID-19 when he was sent to work at the other unit, which had many positive cases.

He got sick a few days later.

The officer is convinced that he contracted COVID-19 as a direct result of being sent to work at that other unit.

Jeremy Desel, a prison spokesman, told WFAA in an interview that he did not believe it was “possible to delineate exactly where someone … contracted this virus.” He said it was just as possible that the correctional officer caught the virus elsewhere.

Across Texas, 36 prisons are on lockdown because of prisoner and staff cases.

“The prisons are pretty much an incubator for COVID-19,” said Lance Lowry, a spokesman for the Correctional Officers Association of Texas. “The state – I'm giving them a 'F' on their due diligence on this. They have not acted responsibly.”

Texas’ prison system has had more prisoners test positive for COVID-19 than any other state, according to The Marshall Project, a nonprofit organization that focuses on the criminal justice system.

They also rank first in prisoner deaths, according to the Marshall Project.

One of those state prisoners that contracted COVID-19 is Victor Cantu, 72.

He was housed at the Cotulla Unit, about 90 miles from San Antonio. Just over half of the unit’s prisoners have caught COVID-19, as have dozens of staff members, according to the state’s tally of cases online.

Cantu went to prison for killing a man in 1980.

“He's been there for 40 years,” his daughter-in-law, Jasmine Cantu, told WFAA. “He is an old man now. He went to prison when my husband was nine months old.”

Around the beginning of July, the family received a call letting them know that Victor was in critical condition and on a ventilator.

Jasmine said by the time the family was notified, Victor had already been in the hospital for a day and half.

“He's there alone by himself,” she said. “You know, we may not even get to say bye.”

Desel, TDCJ’s spokesman, told WFAA that surges in the number of cases at particular units is often linked to mass testing.

At Cotulla, where Cantu was housed, prison officials say 92% of the prisoners who tested positive showed no symptoms.

“The actual number of symptomatic cases that we have inside TDCJ is actually on the decline, has continued to be on the decline for several weeks,” Desel said.

But even as the outbreak continues, TDCJ continues to send correctional officers assigned to one unit to work at other units, potentially spreading the disease.

The reason? Not enough staff. Even before the pandemic, TDCJ couldn’t hire and keep enough workers.

A fifth of its prison guard jobs are unfilled, according to the most recently available TDCJ staffing report. Now, with coronavirus raging, Desel said there are sometimes as many as 1,000 correctional officers in quarantine – unable to go to work.

In many of the units, the staffing shortages are particularly acute. The Clements Units, located in Amarillo, only has 50% of its positions filled.

The Polunsky Unit, which houses Death Row inmates, had 59% of its positions filled. Telford, located in Texarkana, had 56 percent of its correctional officers spots filled.

All three are units that have had significant outbreaks of COVID-19, according to TDCJ records, and all three units have been bringing in officers from other units to fill the staffing gaps.

“We do everything in our power to keep everyone safe through all of our protocols and to make sure that we're able to staff those units to the best of our ability,” Desel said.

In North Texas, officers assigned to the Hutchins Unit south of Dallas are now being sent to the Coffield Unit in East Texas, where there was a major outbreak of COVID-19. Coffield has almost 40% of its positions vacant, TDCJ records show.

Hutchins Unit officers told WFAA that they have refused to go, fearing that they will contract the deadly virus.

WFAA had previously reported that Hutchins Unit officers were refusing to go to Michael Unit, and were being disciplined for doing so.

“We don't want anybody to be exposed to COVID-19 unnecessarily,” Desel said. “Masks are required 24-7 at all times in all areas.”

Begging for masks and gloves

But current and former correctional officers have described to WFAA having to beg supervisors to provide them with personal protective equipment, including masks and gloves.

“The reality is that we had no PPE whatsoever, except for a little flimsy mask and perhaps some sanitation stuff that they gave you if you begged hard enough,” said a former correctional officer, who asked not to be named because he may later apply for another state job.

The officer worked at a unit in the Houston, and says he quit because he is diabetic, has high blood pressure and did not feel safe working for TDCJ.

He said in one instance, an officer who was ordered to clean out a sick offender’s cell was mocked for requesting full PPE. The offender had been sick with COVID-19 symptoms, he said.

“Seems to me that TDCJ only really cares about officers after they die,” the former officer said. “We’re really expendable people, which is really sad because we come to work and do our job for public safety every single day of the week and we do it with not very much pay.”

Another officer, who works at the Hutchins Unit, told WFAA that after the prison unit came off lockdown, supervisors stopped providing them with masks. He said one day when the auditors showed up, supervisors rushed around to pass out masks.

“Inmates have started writing grievances because of some of the employees don’t have masks are coming into the housing area,” said the correctional officer who also asked not to be named because feared losing his job.

Desel said TDCJ provides personal protective equipment to all those who need it. He said the prison system has manufactured more than two million cotton masks, and has about a half a million stockpiled throughout the state.

“Every unit has twice weekly meetings where they make sure they have the stocks that they need, or the foreseeable stock that they might need,” he said.

About 90 minutes from Cotulla, more than 500 inmates at the Dominguez Unit have tested positive for the virus, although most of them have recovered, according to TDCJ’s website.

Ashley Chollett’s husband was one of the inmates who got sick.

“When it first broke out, they weren't giving them masks,” she said.

Her husband, Richard Briseno, is more than halfway through a two-year sentence for arson.

“He felt fine one day, and then miserable,” she said. “The next day, it was it day by day. He never knew how he was going to feel.”

Meanwhile, Victor Cantu’s condition is worsening. He remains on a ventilator. He’s on dialysis and was flown by medical helicopter to a prison hospital in Galveston.

His family is not allowed to see him in person.

The parole board turned him down for release in June, not long before he got sick. He does not come up for parole again till next summer.

“He's not a threat to nobody,” Jasmine said. “Let the man come home and die in peace or have what time he has left with his kids.”

And that East Texas correctional officer who got COVID-19?

He told WFAA he’s not sure how much longer he can work for the prison system.

“If I keep feeling like my family is going to be in danger because of my job, I won't stay,” he said.

If he quits, it’ll be just one more job TDCJ will have to fill. 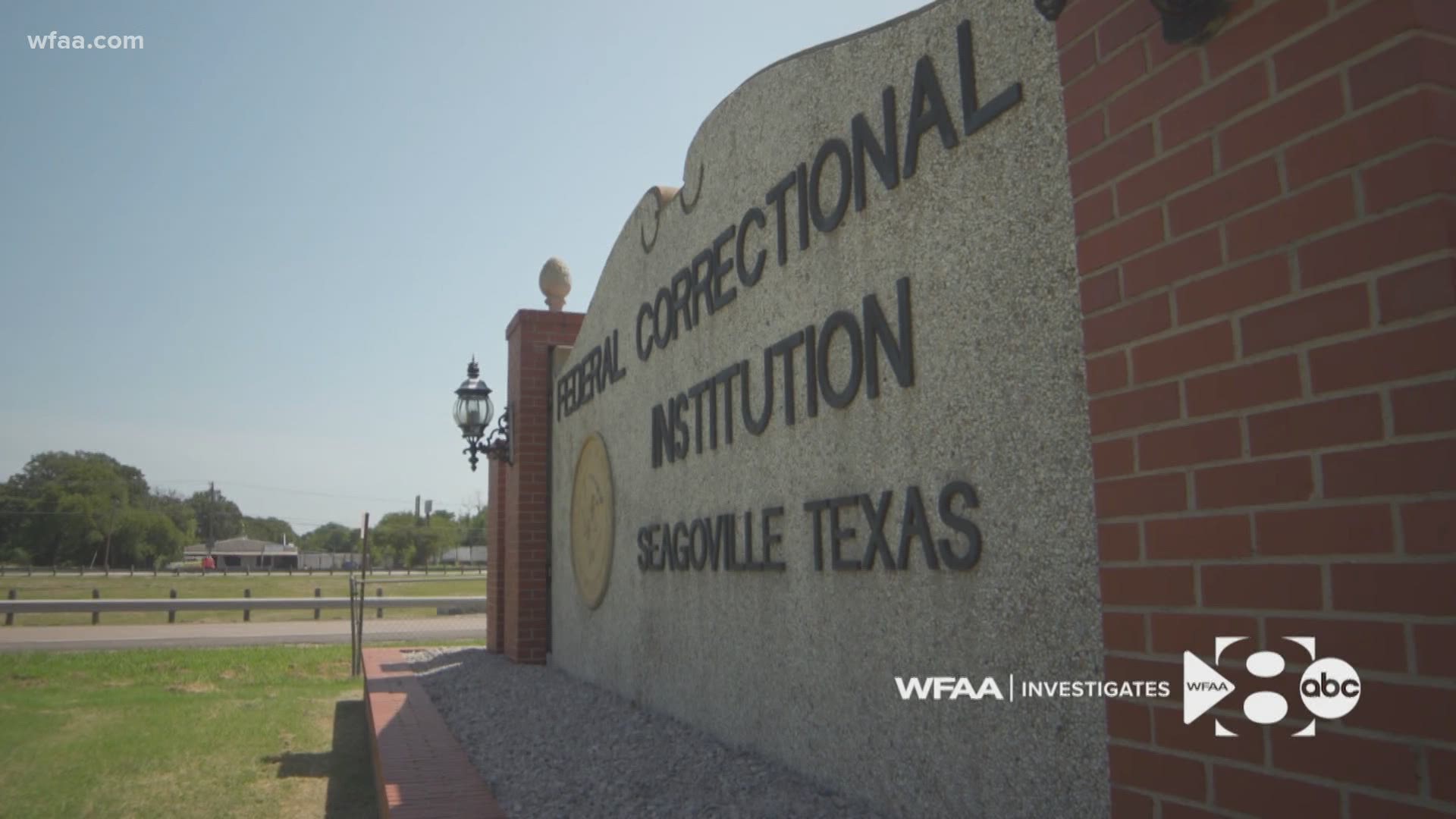