How much money did lawmakers get from energy industry after power grid reform passed in legislative session? Millions.

Campaign finance reports show who got the most natural gas and electricity lobby largesse, amounting to ‘a check for a job well done,’ a watchdog says. 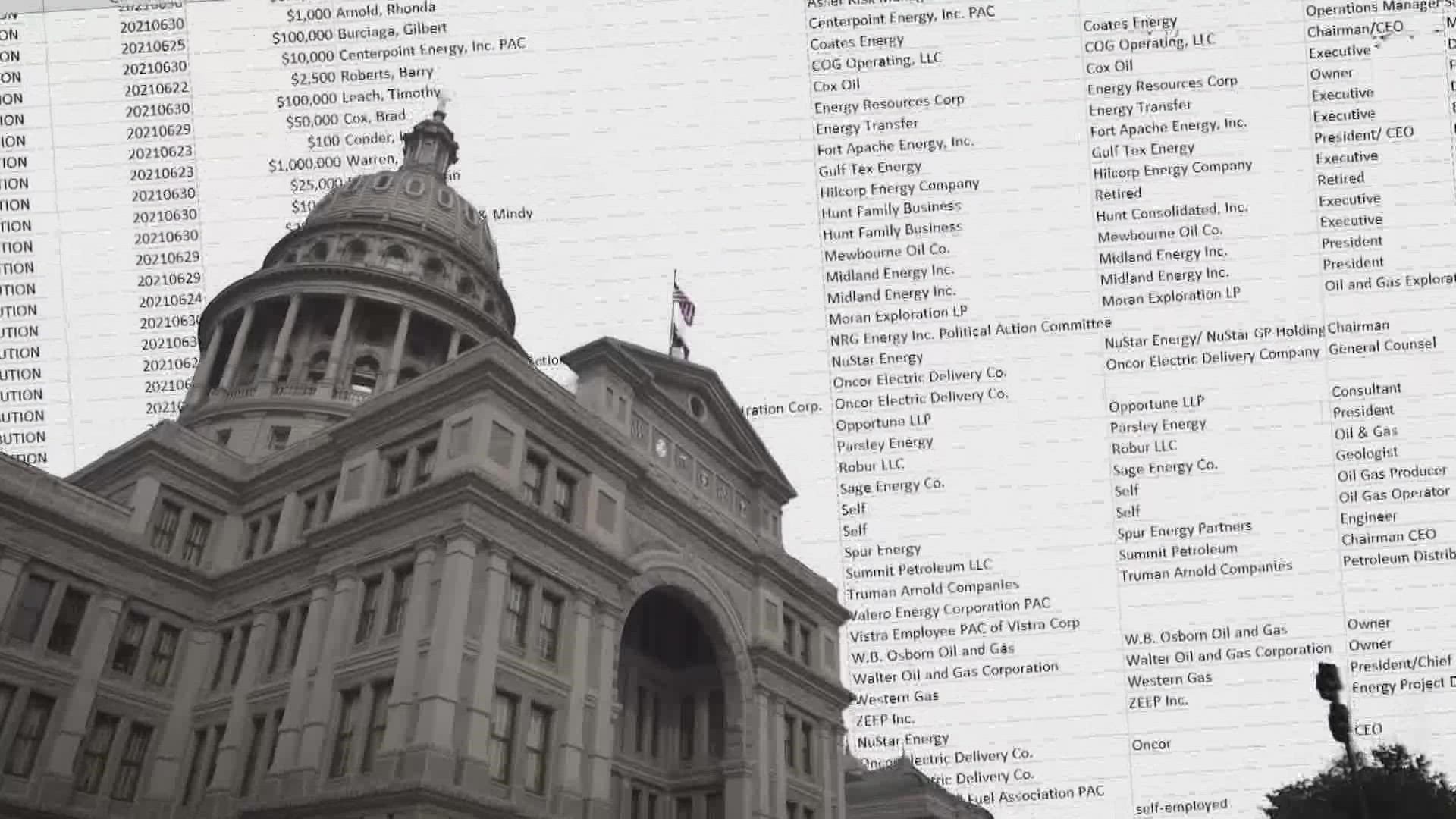 Winter is coming, and it will be the first real test of the Texas power grid after last February’s historic and deadly system failures.

Remember when lawmakers in Austin told us they would fix the power grid? We’ve reported that there are still no deadlines for weatherizing critical systems.

That got WFAA’s investigates team wondering: how much money did lawmakers get from the energy industry after the legislative session was over?

State lawmakers can’t take campaign contributions while the legislature is in regular session. But in the nine days after contributions resumed, and the mid-year reporting deadline, we found that the energy industry donated $4,098,120 to the campaigns of the nine elected officials who were key decision makers in this year’s reform.

That's almost twice as much as the industry donated to the same elected officials after the 2019 session. (The Texas Legislature meets every two years.)

That's more than three times as much as they donated to the same officials after the 2019 session.

Kelcy Warren, CEO of Dallas-based Energy Transfer, gave the most money, with a single $1 million contribution to Gov. Greg Abbott, who is heading into a re-election year.

Warren’s donation is four times what he gave after the 2019 session. It’s been widely reported that Warren's natural-gas pipeline company made billions in windfall profits from the February storm.

“That’s the way this place works. It's money in and policy out,” said Tom “Smitty” Smith, who spent 30 years as a lobbyist and consumer watchdog in Austin.

“After a winter storm that has cost Texans billions and hundreds and hundreds of lives, the reforms weren't nearly as tough as they needed to be, but the money flowed, and as a result, it was kind of like giving (lawmakers) a check for a job well done,” Smith told WFAA.

Unlike the strict contribution limits for federal campaign donations, Texas does not set limits on how much an individual can donate to a campaign for a state office.

“There are a lot of energy interests that were worried about legislation, and it looks like we're giving rewards for basically giving them a pass,” said University of Texas energy resources professor Dr. Michael Webber. “If you make a billion, what's a million-dollar donation? It's a small fraction of your overall takeaway, and actually a pretty good return on investment.”

WFAA asked Warren if the storm profits and lack of strict regulations from lawmakers influenced his million-dollar donation this year.  He declined to be interviewed but sent a statement saying:

“Governor Abbott’s economic and energy policies have created job growth and secured our position as a dominant energy producing state. The oil and gas industry drives economies locally, nationally and globally, and its importance should not be overlooked."

"Governor Abbott represents all Texans, and that’s what he takes into account every day as he works on behalf of the Lone Star State."

Lawmakers did pass a bill that requires power generation companies to prepare to withstand extreme weather, but the bill fell short of setting a deadline for when the changes must be completed and how the state would enforce it.

“Without a doubt, the regulatory system in Texas is not looking to scrutinize gas more, or hold it accountable for its behaviors,” Webber said.

“It creates a political system where perhaps we don't get to all be represented equally,” Dr. Brock said.