'Mom, they're up here shooting': Inside Timberview High School as the shooting happened

Students and teachers locked their classroom doors, turned out the lights and hid under their desks as police investigated the shooting. 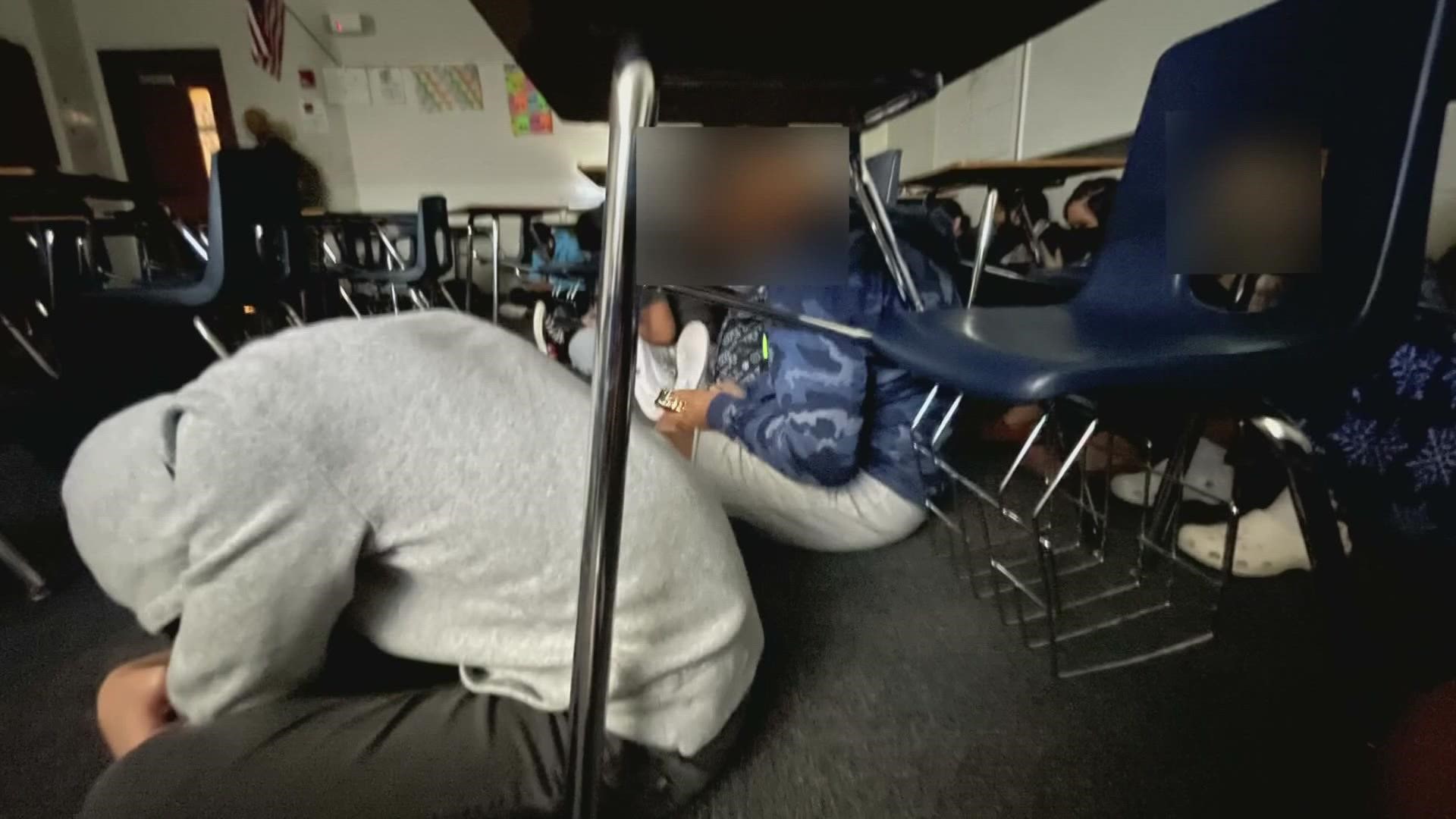 ARLINGTON, Texas — When gunfire broke out at Timberview High School on Tuesday morning, students and staff did what they've trained for: They barricaded themselves inside their classrooms, locking the door, turning off the lights and hiding under their desks.

And they knew it was no drill.

"'Pop, pop, pop,'" Esmael Juma, a junior, recalled hearing in his classroom down the hall from where the shooting happened. "That's when my teacher was like, 'Nobody move.' They said, 'Lockdown, lockdown,' so we knew it wasn't a drill. Plus, we heard the shots."

Like they've trained, Juma said, his teacher and classmates turned off the lights and huddled in a corner.

"We all just knew to turn off the lights and go hide in the corner," Juma said.

For about the next two hours, that's where they stayed, in silence, as police responded to the shooting and worked to clear the building. The students had their phones, though, and news started to trickle in that a student and teacher had been shot.

"For someone to bring a gun to school and let it off, I didn't think it was ever going to happen," Juma said. "This isn't something that should be happening at a school."

Just spoke with a student locked down during the #timberviewhighschool shooting, as well as his mom #wfaa #ArlingtonTX #schoolshooting pic.twitter.com/xkRV77eG5A

Jaedan Marshall, a senior, said he was across the hall when the initial fight started. Marshall's teacher, Calvin Pettit, ran to help.

"A teacher’s yelling out ‘help’ about three times," Marshall said. "Not more than three seconds later there was about six shots let off."

Marshall said his classmates ran to the back of the room, while he and a few others blocked the door. He said his stomach dropped.

"I didn’t know what to do for a second, but I just made sure I stayed alive and the people in the classroom stayed alive," Marshall said.

Marshall said they were barricaded in the classroom for about 15 minutes and then police came to the door.

Pettit, a 25-year-old English teacher, was among the victims shot, but he was in good condition. Marshall said they were able to message Pettit, who told them he was fine and that he loved them.

Aaron Delagarza, a 17-year-old senior, was also in Pettit's class.

"We started hearing 'Help.' We heard it a few times. It turned from a regular 'help' to someone screaming," he said. Soon after, he heard gunshots.

"We were all in shock - how is this happening?" he said. "I was worried about Mr. Pettit, he went out there with the full intentions, and he could’ve easily been killed."

One Timberview mother shared with WFAA her text exchange with her son, a freshman at Timberview.

Shortly before 10 a.m., he let her know that the school had been on lockdown for the past hour. When she asked if he was OK, he said he was fine but couldn't call her.

His mom then heard it was a shooting.

"All we can hear are sirens outside," he replied.

A mom shared this text exchange with her son, who is a freshman at Timberview High School

He hid under a desk during the shooting.

She says no parent should have to go through this. @wfaa #Arlington #Texas pic.twitter.com/DOh40Dl1U2

In the same area of the school, Julius Evans, a freshman, was also in class when him and his friends heard a fight break out in a different room. Then they heard girls screaming in the hallway, "He's got a gun!"

In Evans' classroom, the students fled. He said he and some friends ran off campus, into a neighborhood, where he called his mom.

"I called her and said, 'Mom, they're up here shooting,'" Evans recounted.

Evans reunited with his mom in about five minutes, and they went to pick up his siblings at a different campus.

"It was a very scary experience," Evans said. "I'm happy that my sister's OK and that my brother's OK."