A third of the ERCOT board members live out of state

State officials confirmed that they pulled down the photos and biographies of ERCOT board members from the website due to possible safety threats. 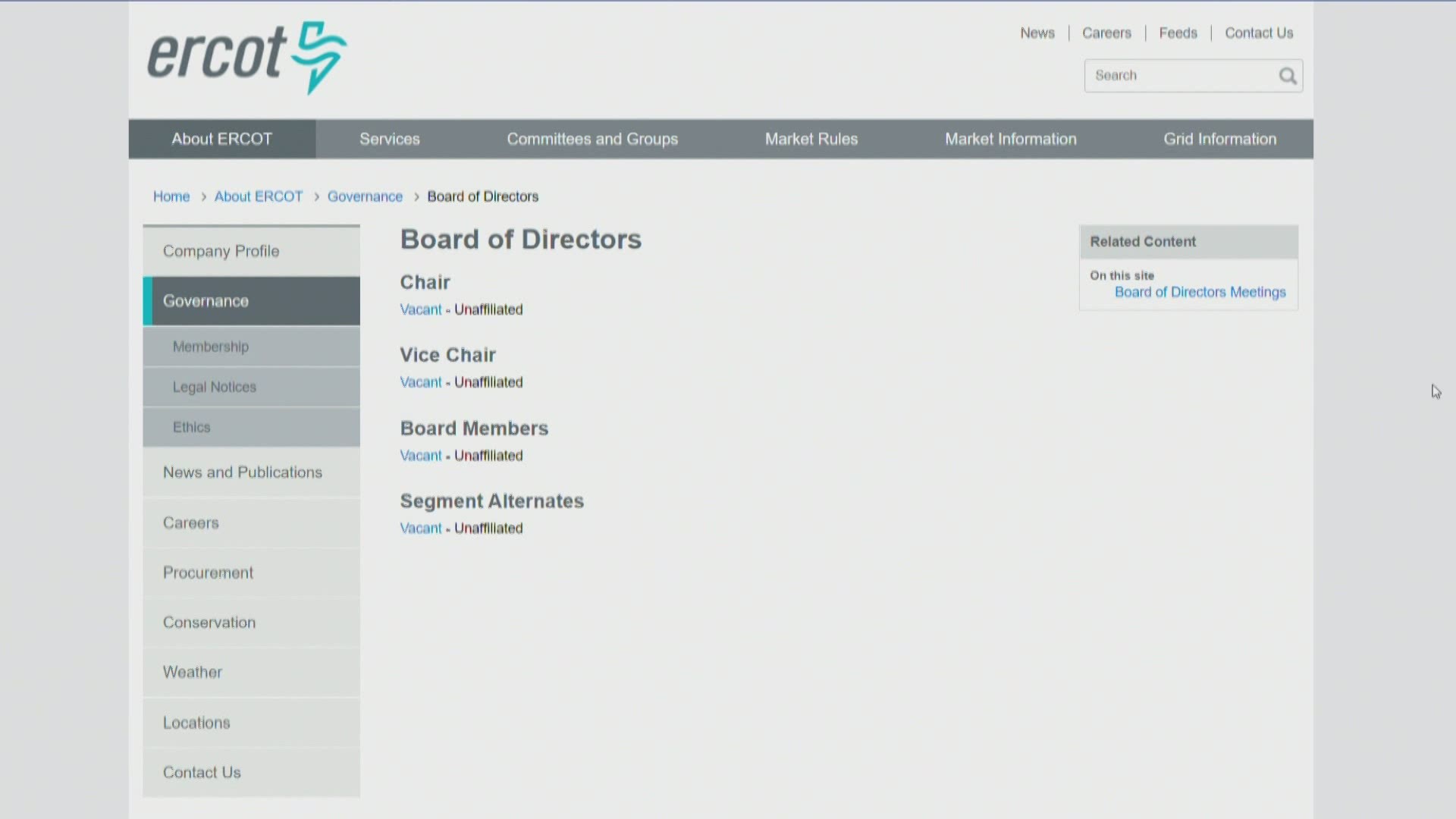 DALLAS — A third of the board of directors that operate the state’s electrical grid do not appear to live in Texas, and their performance in wake of widespread outages has led to a Dallas-area lawmaker’s call for change.

Records show the two top office holders of the 15-member board of the Electric Reliability Council of Texas (ERCOT), live out-of-state. Three other ERCOT board members also appear to live thousands of miles from Texas.

RELATED: You've heard a lot about ERCOT lately. What exactly is it?

As millions of Texans have been without electrical power – sometimes for days – public outrage has grown. Due to concerns about possible safety threats, state officials confirmed that they pulled down most of the ERCOT webpage that revealed photos and biographies of each board member.

Despite pulling down board member names, bios and photos, ERCOT kept a board page on its website, but listed the chair, vice chair, and 13-other board positions as “vacant.”

Rep. Jeff Leach, R-Plano, told WFAA that he was “totally shocked” to learn a third of the ERCOT Board of Directors lived outside Texas.

“People who are making literally life and death decisions on behalf of our families and our communities don't even live in the state of Texas,” Leach said. ”… I'm frustrated and cannot believe that the board chair of our leading energy decision maker doesn't even live in Texas, but lives in Michigan. It just cannot be that way here in the Lone Star State.”

Leach said he has begun drafting legislation to prohibit non-Texans from serving on the ERCOT Board. Now, board members are appointed by a nominating committee made up of current members.

Leach acknowledged that Texas has been through an “unprecedented weather event” with all 254 Texas counties under a disaster emergency declaration.

“But we should have been better prepared; the response, the lack of communication, the failure in preparedness is unacceptable for the Lone Star State,” Leach said.

Leach also said he was troubled by threats made against ERCOT Board members, as well as ERCOT’s decision to pull down the board members’ names and bios.

“Threats are wrong and should be reported to law enforcement,” Leach told WFAA. “But to intentionally hide the names of the individuals who are charged with making decisions on our behalf is wrong and misguided and possibly unlawful.”

When asked about prohibiting non-Texans from becoming board members, ERCOT’s CEO Bill Magness said such change would have had little impact on the operating of the electrical grid the past few days.

RELATED: How will my electric bill be impacted? Whether you lost power or not, Texans could see higher bills

“I think if folks want to look at how ERCOT is run, and who runs it, that is obviously part of the investigation of what we’re doing in the future,” Magness said. “You know all those things are on the table. But I think there was no impact of the chair or the ERCOT board member directors on the weather or on the decisions we had to make to avoid a catastrophic black out.”

The ERCOT website biographies prior to being pulled down listed ERCOT Chair Sally Talbert as a former state utility regulator in Michigan. Records indicate she lives in Williamston, Michigan.

Talbert failed to return calls or texts by WFAA. And Cramton could not be reached for comment.

Other ERCOT board members who records indicate live out-of-state include:

WFAA asked ERCOT for their board member contact phone numbers and emails, but did not receive a response. WFAA also tried calling the three board member, but were unsuccessful.

WFAA conducted a 20-minute interview with the CEO of ERCOT Tuesday morning, talking about the current electric crisis in Texas. You can hear that conversation here.