Jonathan Price was trying to intervene in a domestic violence situation before he was killed at a Wolfe City gas station, relatives and friends said. 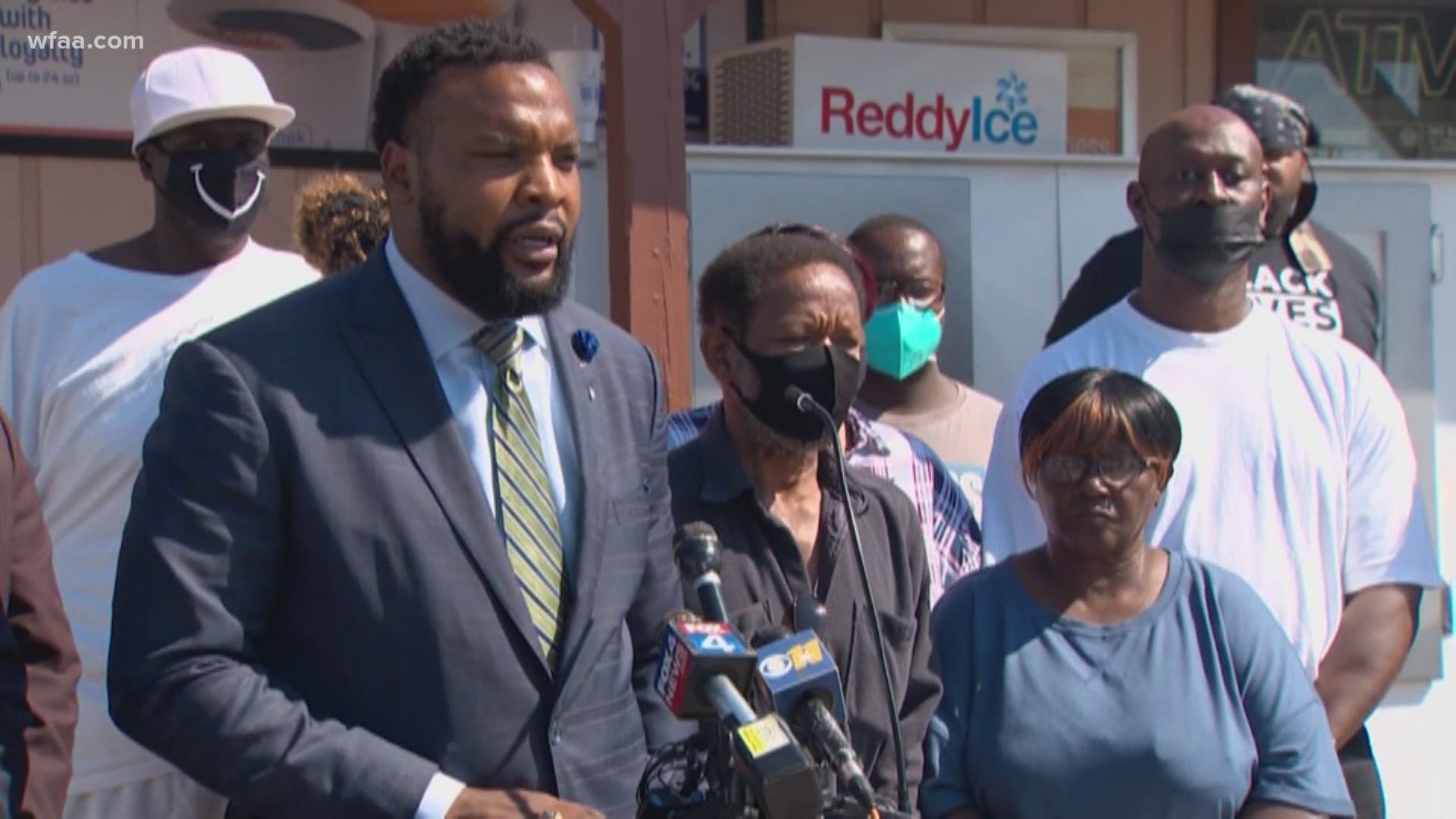 WOLFE CITY, Texas — Wolfe City police officer Shaun Lucas has been arrested on a murder charge in connection to the shooting. Click here to read the story.

Updated at 3:30 p.m. with information from relatives and an attorney.

The family of a man shot and killed by a Wolfe City police officer over the weekend say they want justice for a man who was known as a "pillar of the community."

Friends and family of Jonathan Price said he was trying to intervene in a domestic violence situation before he was killed at the Kwik Check gas station at 103 Santa Fe Street. They say the argument was settled before officers even arrived.

The police shooting is being investigated by the Texas Rangers. The law enforcement group has released few details on what happened. Officials did say that the police officer was placed on administrative leave.

Officials have not named Price, but relatives confirmed his identity.

Civil rights attorney Lee Merritt and relatives gathered near the site of the shooting Monday afternoon. They called on the Hunt County District Attorney to issue an arrest warrant for the officer who shot Price.

"We have one request, one demand from this mother from this father and it's arrest the cop that killed Jonathan Price today," said Merritt. "He deserves justice because he was a human citizen who was not breaking the law and he was gunned down by police officers."

Relatives and friends said Price was a city employee and well known in Wolfe City, about an hour northeast of Dallas.

Many rushed to the scene of the shooting Saturday night in the small town of less than 1,500 people.

Price's father said he spoke to the officer who shot his son. The officer's name has not been released by officials.

Junior Price said the officer told him to get back and said he would say why he shot the man later.

"I want to see the man get what's coming to him for killing my son," Junior Price said Monday of the police officer.

Relatives said they have received very little information about what happened to Jonathan Price.

"They deserve to know every detail about what happened and they need to know it immediately," Merritt said.

The attorney said he spoke to the police chief who "did say that he was not happy with what he saw."

The gas station has surveillance cameras outside, where the shooting occurred, and Merritt said the footage was turned over to the Texas Rangers, though the family has not seen it.

LIke Price's father, his mother, Marcella Louis, went to the gas station after the shooting.

The mother said she wasn't surprised to hear her son was trying to intervene in a fight.

A vigil was held for Price at 6:30 p.m. Monday in Wolfe City. Hundreds met outside the convenience store where he was gunned down and marched down the city's main drag chanting Price's name and calling for the arrest of the officer.

Some never met Price, but others say they watched him grow up, and were mourning the man he was.

At the vigil the Price family asked for calm in the town, saying they didn't want anything to overshadow Price's life. The demonstration remained mostly calm into Monday evening.