"I felt the euphoria of my life and soul leaving my body," he said. "So it wasn't a feeling of sadness or joy. It was more like tranquility. So I knew what was going on. I'm dying." 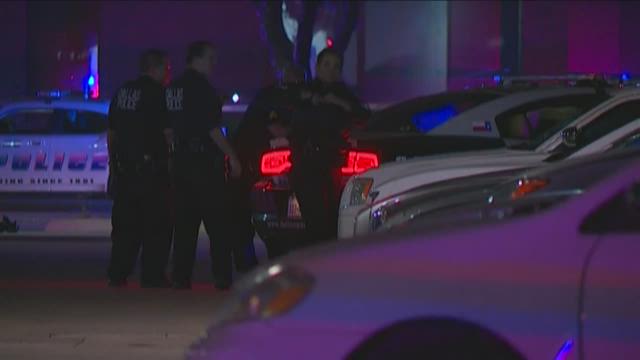 "I could hear people yelling and screaming," he said. "I could hear ambulances and I knew they were coming for me."

Lujan was working off duty on November 9, 2015 at Club Kalua in Northwest Dallas.

He and other officers were escorting four men, who had been kicked out of the club, when Eduardo Gonzalez-Rios got into his SUV, turned it towards Lujan and ran him over, police say.

"The initial hit slammed my head against the windshield peeling my scalp all the way back from my right side," Lujan said.

Police say Gonzalez-Rios put the SUV in reverse and ran over Lujan again and then shifted into drive and ran over him a third time.

His injuries were severe. Lujan suffered a traumatic head wound, where you could actually see his skull. He had a lacerated tongue, broken neck and back, broken ribs, broken sternum, shattered hips, ankles and legs.

As he lay on the pavement he knew he was dying.

"I felt the euphoria of my life and soul leaving my body," he said. "So it wasn't a feeling of sadness or joy. It was more like tranquility. So I knew what was going on. I'm dying."

He doesn't remember being hit by the vehicle but woke up face down on the pavement.

Lujan says he looked over to the side of the road and saw his father standing over him. His dad died eight years ago.

Lujan says he felt a sense of peace and says standing next to his father he saw God.

"God stood right next to my dad and I knew at that moment he was in heaven," he said. "I took a deep breath there and I felt my life and soul re-enter my body and I remember waking up in the arms of the fire fighters on the way to Parkland."

While in the ambulance he could hear paramedics talking about his condition.

“And I thought, 'Oh my God, I'm going to die in an ambulance. It's like I am dying and there is nothing I can do,'" he said.

He said as he was being wheeled into Parkland Hospital he asked for a priest.

"I said, 'Father, the last thing I want to do before I pass away is I want to forgive the person who did this to me,'" Lujan said.

He says the experience changed his life.

"It's made me a better person, a better human being because I know how short life can be," he said.

Lujan said he wants to tell his story to help others dealing with pain, suffering and the loss of someone they love.

"I don't remember feeling any pain and I tell people all the time if God is that good then he is not going to let you feel any suffering at that moment of death," he said.

Many people, including doctors, thought he would never work as a police officer again but he's back at work.