The storm created 35-times more bulk and brush debris than the City normally picks up in a single month. 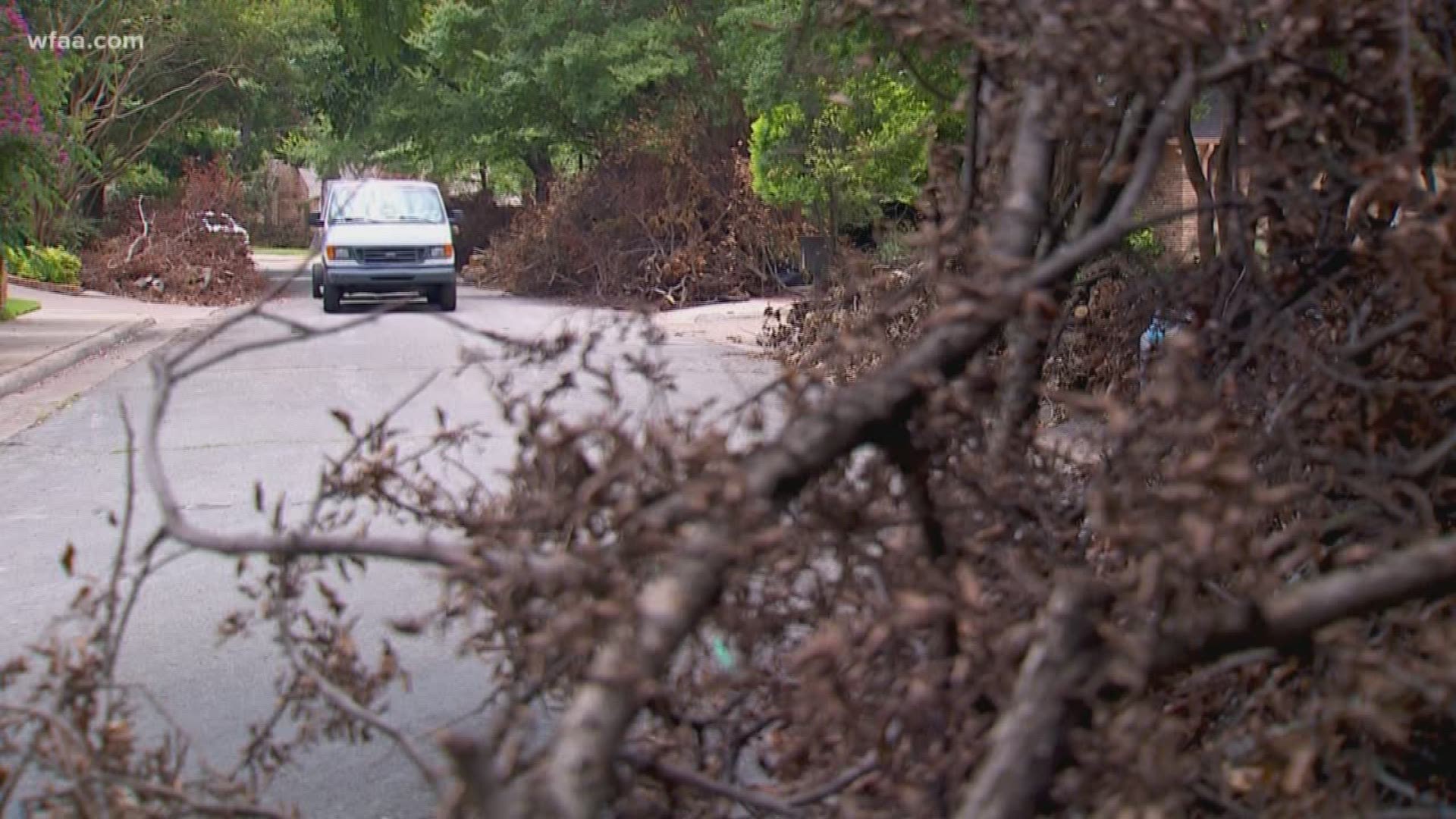 DALLAS — It’s been nearly one month since a devastating storm hit Dallas County and crews are still struggling to keep up with the mountains of debris.

It was a wind storm that toppled a construction crane in Dallas' Deep Ellum neighborhood and downed trees that severely damaged homes throughout the county.

But the City is asking for patience as it tries to clean up from a record-setting storm.

Rick Dennis is among those waiting. His home north of Prestonwood used to include the shade of a prized cedar elm.

"Now it looks like a skeleton," he said of the heavily pruned tree.

Most of its former canopy lines the sidewalk in front of his home and most of the sidewalk next to his neighbor's home.

Dennis is waiting for city of Dallas brush collection crews to come remove it from the curb.

"It more than bothers me. It frustrates me," Dennis said. "I have to wonder what's the logic of waiting this long to start the removal. We're really frustrated at the fact that nothing has happened. It's been a month basically."

His complaint is shared by neighbors throughout Prestonwood.

A multi-block area near Arapaho and Beltline and Hillcrest still has sidewalks blocked by dead and tinder-dry tree branches and other storm debris sometimes stacked more than 10-feet high.

"It's an inconvenience but it's understandable," Bird said. "We still have to work together and be patient and wait. I'm sure they're doing everything they can do."

And the city of Dallas suggests she is right.

A temporary debris collection site at the North Central Expressway and the LBJ freeway shows the huge scope of the problem.

A city spokesperson said they have 100 debris collection trucks at work. They also have hauled away 3,400 dump truck loads of debris.

The storm caused wide-spread damage throughout Dallas County and created 70,000 tons or about 500,000 cubic yards of storm related debris, mostly from tree damage.

Rose Harp, from her Northwood Hills neighborhood offered some additional context. Her neighborhood enjoyed being one of the first to have its piles of downed trees and limbs picked up by the city.

She has only a secondary pile waiting to be picked up now. She is more concerned about the two-story blue tarp that covers the corner of her home crushed by a falling oak tree.

The tree, most of which has been hauled away, ripped out two walls of her upstairs corner office and heavily damaged the floor below it too.

While the city of Dallas predicts it may take until the end of July for it to complete brush pickup of the damage left by the June 9 storm, Harp's biggest obstacle is the September estimate given to her by her insurance company to even expect repairs to begin.

"They say they're very busy the insurance people do. And I know the city's busy," Harp said. "There's so many people who have claims now and we're just trying to get to everyone and let them know we're working."

The city of Dallas is asking residents to be patient.

It's asking in order to assist with collection efforts, that residents place tree debris, branches or shrubbery separate from other storm debris such as damaged fence panels or bagged storm/vegetative debris.