All protests aren't happening on the streets. Some local artists are using paint to address police brutality. 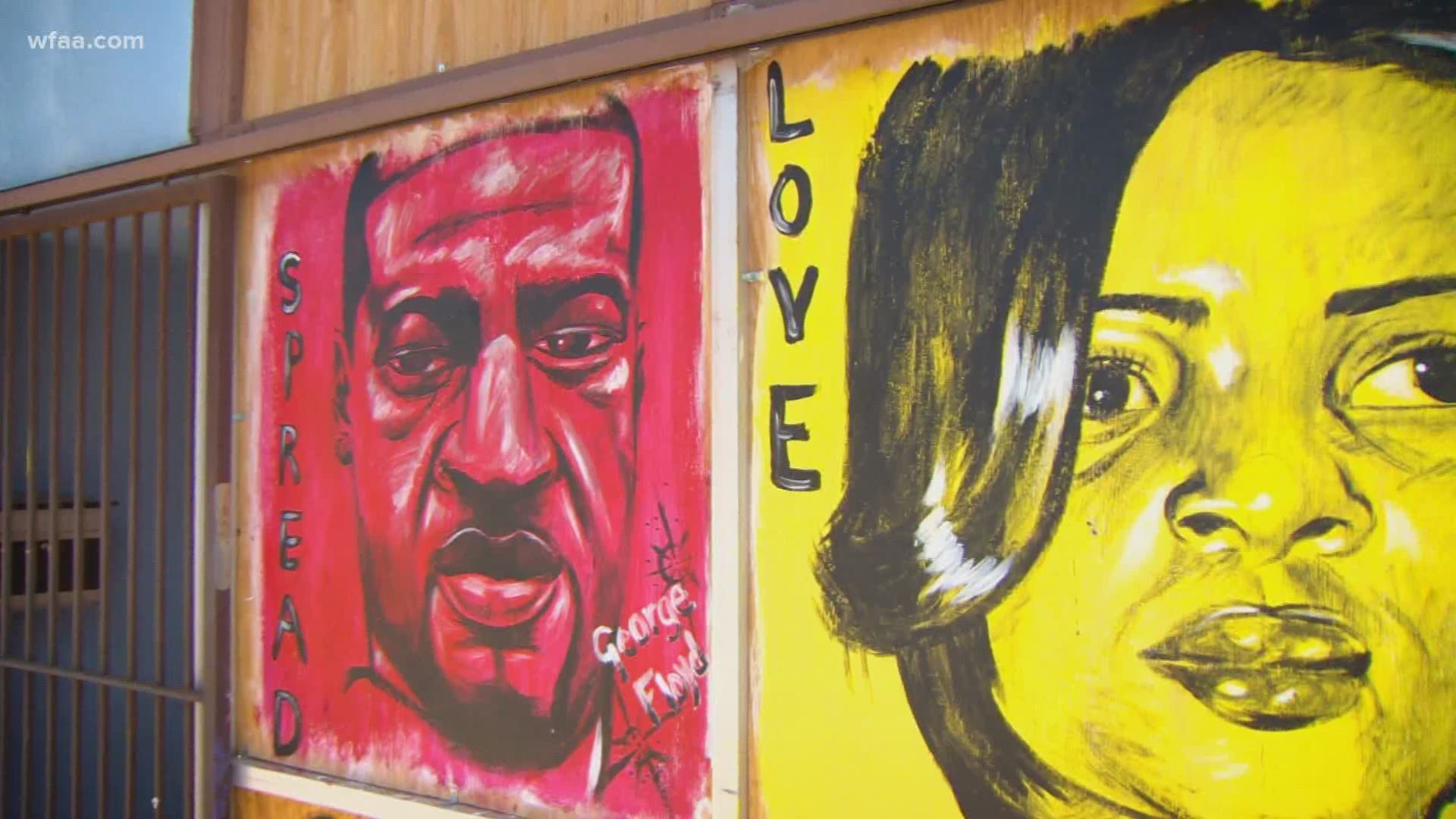 DALLAS — Social justice and civil rights protests are happening across the country, since the tragic death of George Floyd in Minneapolis.

Not all protests are happening in the streets. With so much at stake, residents are finding unique ways to make their voices heard and invite some critical conversations.

In North Texas, artists Theo Poncheveli and Gabriel Thomas are among them.

A building in Dallas’ Deep Ellum neighborhood that’s been boarded up due to COVID-19 is becoming a canvas for a painter who’s inviting public dialogue.

“It hurts,” said Sinetra Mack, as she stopped to take a photo of a mural that recently popped up on the building.

The painting by local artist Gabriel Thomas is stopping some people in their tracks.

The images of George Floyd, Atatiana Jefferson, Jordan Edwards, and Botham Jean stand out on the mural. They are four black people, each killed after interactions with white police officers.

The paintings were created after Floyd’s death, and after protesters across the country began hitting the streets.

“Until we find a solution, this is just going to be a cycle that continues to go on over and over again,” said Mkhuzo Lungo.

For some people, the mural speaks to their pain.

The words Spread Love Not Hate can’t be ignored on each panel of the mural.

Most people passing by this work, said they just want to be seen and heard.

“We’re tired,” said Destiny King. “We’re tired of injustice. Not having equal rights to anything. We’re just tired of everything that’s going on, and we want to put an ending to it.”

A few miles away, traffic is busy in an area popularly known as Graffiti Park. People are showing up to view Theo Poncheveli’s artistic interpretation of a moment that’s rocking the country.

A mural depicts an horrific moment. There’s an image of George Floyd, lying face down with a halo over his head. There’s also the faceless image of a Minneapolis police officer driving a knee into the man’s neck.

“This is becoming the norm. I don’t want it to be the norm. I know that one image doesn’t change it, but the horrific video kind of sheds light on what’s been happening for so many years,” Poncheveli said.

The officer is painted with his hand left hand resting in his pocket. His badge is intentionally smudged.

“He doesn’t deserve to wear the badge,” said Massoud Nasseri.

People passing by to view this mural call it a strong statement.

"For people to be so vicious about human being lives, you know, we all bleed the same," Nasseri said.

Others say the mural captures many degrees of pain that need to be discussed.

”When will people finally get it? Especially law enforcement. When will they finally get it that what’s happening is something that’s been going on for a long time, and we’re not blind to it,” Eron Diggles added.

Art is subjective. However, the artists and people stopping by these installations hope the pieces inspire dialogue and, perhaps, some change.