After being in foster care for 1,553 days, North Texas boy gets adopted in front of hundreds of family and friends

Nike is an 8-year-old boy who has been in foster care for half his life. On the morning his family legally adopted him, hundreds of people joined to support. 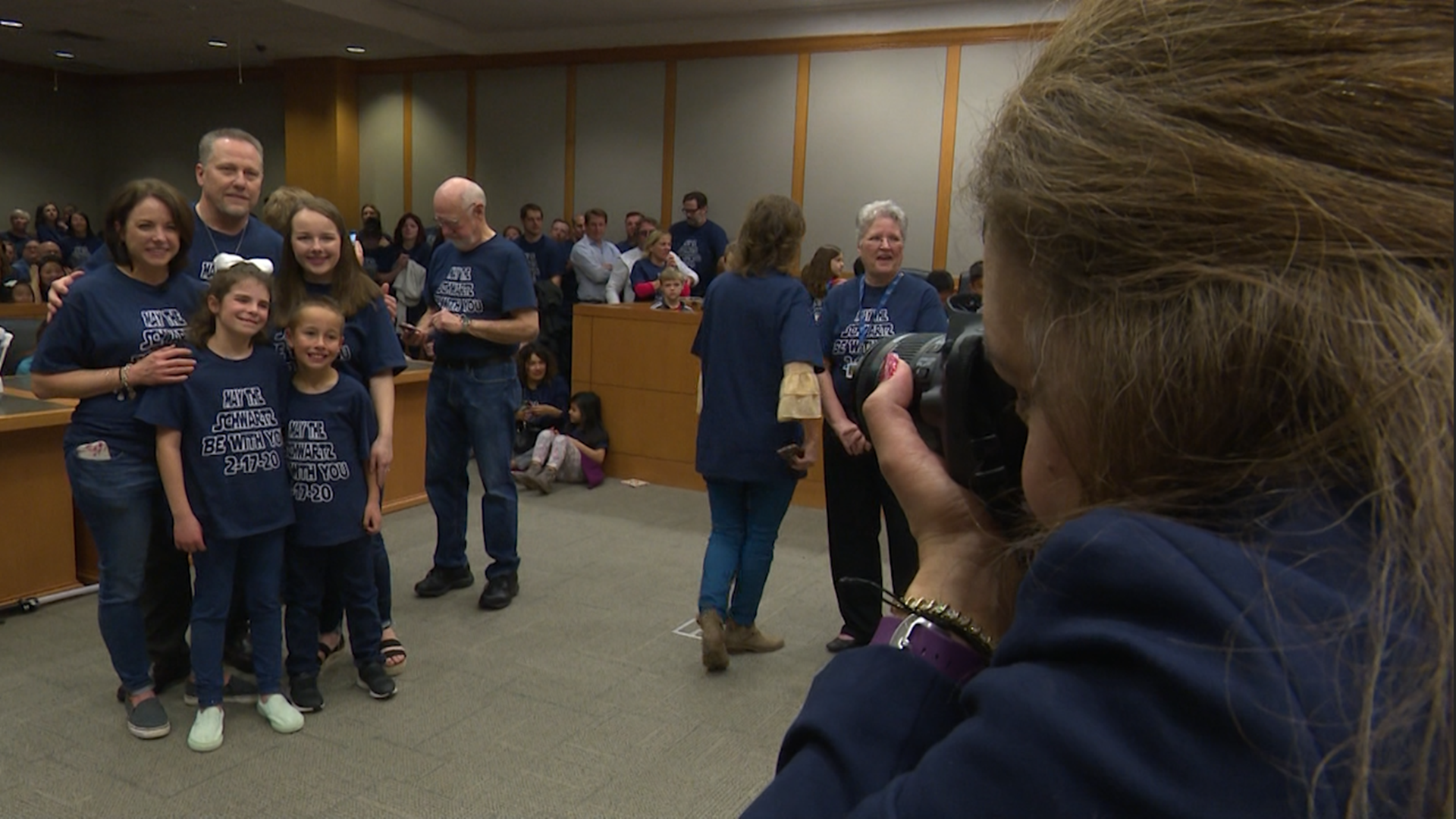 Nike is like many 8-year-old boys. He loves to play video games, spend time with his friends and root for the Dallas Cowboys. He wants to have fun no matter where he is or what he's doing.

He's been wanting something else for more than half his life.

"I've been waiting four years to get adopted," Nike said.

Early in his life, Child Protective Services (CPS) took Nike out of his biological parents' home because of neglectful supervision and drug use in the home, according to Nike's first CPS case worker Elizabeth Cruz.

After his first foster placement didn't work out, Cruz and her team requested David and Kristi Schwartz foster him with the intention of adoption.

This North Texas couple thought about adoption soon after their first daughter, Kylee, was born 17 years ago.

So they did -- through foster care. They took in a 10-month-old boy, who stayed with them for about a year before he went back to his biological parents.

Kristi Schwartz said that was a turning point that changed her perspective on parenting.

"We really thought, selfishly, that we were going to get to keep him," Kristi Schwartz said. "It made us realize it was about the kids."

The Schwartz later adopted their second daughter, Lily, when she was only 4. Six years later, this North Texas couple has fostered a total of nine kids.

The most recent was Nike.

Credit: Jay Wallis
Nike was in foster care for 1553 days. On Monday, he officially became a part of the Schwartz family.

"We could be in a car ride for eight hours, and he would get out of the car and be like, 'That was fun!'" Kristi Schwartz said.

Because of how potentially dangerous Nike's situation was, CPS moved quickly to get him into the Schwartz house.

Kristi Schwartz said a few days after finding out about Nike, a caseworker brought him to their house at midnight.

"We had to move him out of that room, and then make it a bedroom," Kristi Schwartz said about her husband's office at their house. "Then he had to office out of our closet because he was working from home."

Anne Marie Holstead is an adoption specialist at Buckner who has been visiting Nike once a month since the non-profit got involved. She said her team expected Nike to be adopted in about six months. That didn't happen.

"Every time I've seen him the last two and a half years, I always say, 'Do you have any more questions for me?'" Holstead said. "And he always says, 'When am I going to be adopted?'"

Holstead also said the pairing of Nike and the Schwartz family "just made sense."

"They're all really fun, really funny, really quirky and they all love the Dallas Cowboys," Holstead said.

Nike quickly became someone David and Kristi Schwartz wanted to keep for good. However, the lawyers representing his biological parents continued to fight to keep custody.

Charity Borserine, who has been representing the Schwartz family, said it went all the way up to the Supreme Court of Texas.

"It is a marathon," Borserine said. "It is not a sprint. On both ends."

After years of legal battle, the Schwartz could finally adopt a boy who had been in foster care for 1,553 days.

Credit: Jay Wallis
Everyone who showed up to the courtroom Monday was wearing a shirt to celebrate Nike's adoption.

Nike said he felt "really loved" when he found out David and Kristi Schwartz were going to adopt him.

"I just believe in them," Nike said. "I believe them."

The Schwartz family planned to take Nike to the Collin County Courthouse Monday morning to make it official. However, they weren't alone.

Kristi Schwartz made hundreds of shirts with "May the Schwartz be with you 2-17-20" on the front for friends and family. Everyone who took one of those shirts showed up at the courthouse to celebrate the adoption.

More than 300 people packed into the courtroom just to see an 8-year-old get adopted.

"It's a moment where you take an ordinary, every-day occurrence and make it into an extraordinary event," David Schwartz said. "We are so humbled."

There wasn't anything on the backs of the adoption shirts, except for Nike's. His shirt had one word on the back.

"Thanks be to God for this opportunity and to help us grow our family and help us grow through these children," Kristi Schwartz said.

Kristi and David Schwartz are going to take a break from fostering, potentially focusing on some form of mentoring for other potential parents.