Affidavit says Angela West's eyes were 'bloodshot red,' had a McDonald's cup that smelled of alcohol

West is facing a charge of driving while intoxicated with a child under 15, police said. 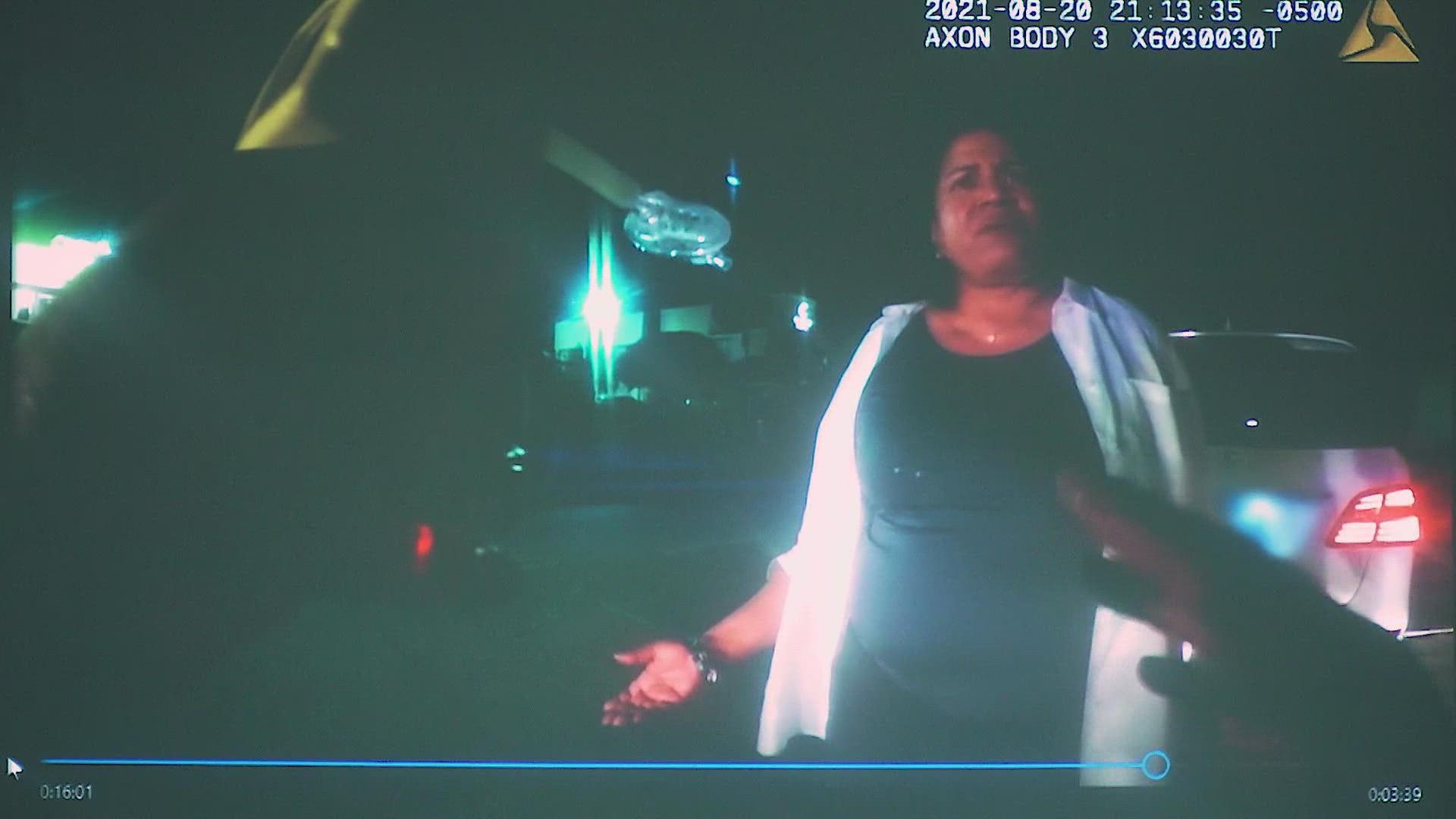 DALLAS — Editor's note: On Sept. 1, the Dallas County District Attorney’s Office declined to pursue charges against Angela West. WFAA has removed body camera footage that was edited and released by the Dallas police department of the traffic stop and arrest, as West is no longer facing charges.

An arrest warrant affidavit provided additional details about the arrest of Angela West, the wife of Texas gubernatorial candidate Allen West. She was arrested on suspicion of driving while intoxicated with a child in the car Friday night in Dallas.

West is facing a charge of driving while intoxicated with a child under 15, police said.

Before she was pulled over, the affidavit said an officer saw West driving between the right lane and shoulder of the road without a turn signal. The officer initiated a traffic stop, and after West stopped, the officer looked into the car and saw a 3-month-old baby sitting in the back in a car seat. The officer, according to the affidavit, said that West's eyes looked "bloodshot red” and, after the officer asked West to step out of the car, she failed a field sobriety test.

After West was placed under arrest, the officer looked inside the SUV and saw a McDonald's cup in the console which smelled of alcohol, according to the affidavit. Dallas Police Chief Eddie Garcia said the department did not test the contents of the cup.

The officer initiated a traffic stop and the SUV came to a complete stop in the middle lane at the 2300 block of West Northwest Highway.

The officer approached the vehicle and smelled the scent of alcohol coming from within the car, the officer said in the affidavit.

The officer said the whites of West's eyes appeared “to be bloodshot red” and the officer observed the baby was in the car seat in the back of the vehicle, the affidavit said.

“West seemed confused and did not understand initial commands” given by the officer, the affidavit said.

West finally pulled off the busy highway and went onto a less congested street in the 10200 block of Shady Trail. The officer asked her to step out of the vehicle and the officer checked on West’s eyes. According to the officer's account in the affidavit, West had “involuntary eye jerking in her right eye” while she was focusing on the officer’s pen stimulus while looking to the right, the affidavit said. West claimed she has an astigmatism.

West’s “appearance was not crisp” and her hair “looked ungroomed” and she had a few wet stains at the top of her shirt, the arrest warrant said.

The affidavit said West raised her arms up to shoulder level and kept them there throughout the test. It also said during the one-leg stand portion of the test, she put her foot down multiple times. During the walk and turn test, she missed “heel to toe” and took the incorrect number of steps, the affidavit said.

The affidavit said West also did not breathe properly into the breathalyzer device, so they could not get a reading.

The officer checked the vehicle for any open containers and found a McDonald’s cup in the center console and that the officer smelled the cup, which smelled of alcohol, the affidavit said.

On Monday, Dallas police released the body camera video of the arrest of West. Police and West's accounts of what happened have differed. WFAA is providing the roughly 19-minute video, which was edited down from the two-hour encounter by the Dallas Police Department, to provide additional context of what happened between West and the arresting officer.

The officer requested that West provide a blood specimen for alcohol analysis, the affidavit said. West consented to the blood draw, according to the affidavit, and the officer and West made it to Parkland Hospital and waited.

“Upon entry of the nurse, arrested person Graham West withdrew her consent and refused the taking of a blood specimen and stated that she wanted to talk to her lawyer,” the affidavit said.

The officer had to obtain an affidavit for a search warrant, signed by a Dallas County judge. The blood was drawn at around 12:13 a.m. Saturday.

Angela West was arraigned in Dallas County jail on Saturday morning and released by Saturday afternoon. It was unclear if she posted bond.

Response from Allen and Angela West on the arrest

Angela West said on Sunday that she only had water and lemonade at a dinner before her arrest and that she had not been drinking alcohol or taking drugs, according to a statement on her Facebook page. Her husband Allen West posted pictures of receipts from the P.F. Chang’s restaurant and he said he was "livid" with how police handled the incident. It is still not clear what the other people she was dining with may have ordered.

On Sunday, Allen West demanded an in-person apology by Tuesday from Dallas Police Chief Eddie Garcia, Dallas Mayor Eric Johnson and Dallas County District Attorney John Creuzot. He also called on the officer who arrested his wife to be fired.

WFAA on Sunday reached out to the Dallas County District Attorney's Office and the Dallas mayor's office for comment and did not immediately hear back.

Her attorney said that there was no alcohol in the cup.

“My client is adamant there was no alcohol either in the cup at that time or any time in the past. There was none,” said Todd Shapiro, West's defense attorney. "It was a cup from McDonald's. She got an orange drink from McDonald's earlier in the day and they left the cup in the vehicle."

He also says he sent his client for an intense alcohol and drug screening that can detect a substance up to 80 hours after consumption. Police are waiting for the results of their own blood test.

Response from the Dallas Police Department

Garcia said that he saw the vehicle driving erratically and that he supported his officer for believing there was probable cause in the arrest. He said in the arrest videos that he saw a courteous and professional officer.

"No police chief can sit idly by while his officers get falsely vilified," Garcia said. "False representations about my officers cannot go unchecked. They work too hard and they sacrifice too much."

Garcia said the results of the breathalyzer test were inconclusive because the test wasn't done properly. Garcia also said that the McDonald's cup was not taken from the vehicle.

Who are Allen and Angela West?

Earlier this year, Angela West ran for Garland City Council District 3 but did not advance to the runoff election.

Allen West, the former Texas Republican Party chairman, announced this summer that he will run against Gov. Greg Abbott.

West, a retired lieutenant colonel in the U.S. Army, previously served as a U.S. Representative for Florida's 22nd congressional district from 2011-2013.