Sandra Bland recorded her own arrest. Watch her cellphone video from the 2015 traffic stop

The family of Sandra Bland -- who died in a Waller County jail cell -- is calling for a re-opening of the criminal investigation into Bland's arrest and death after seeing footage for the first time. 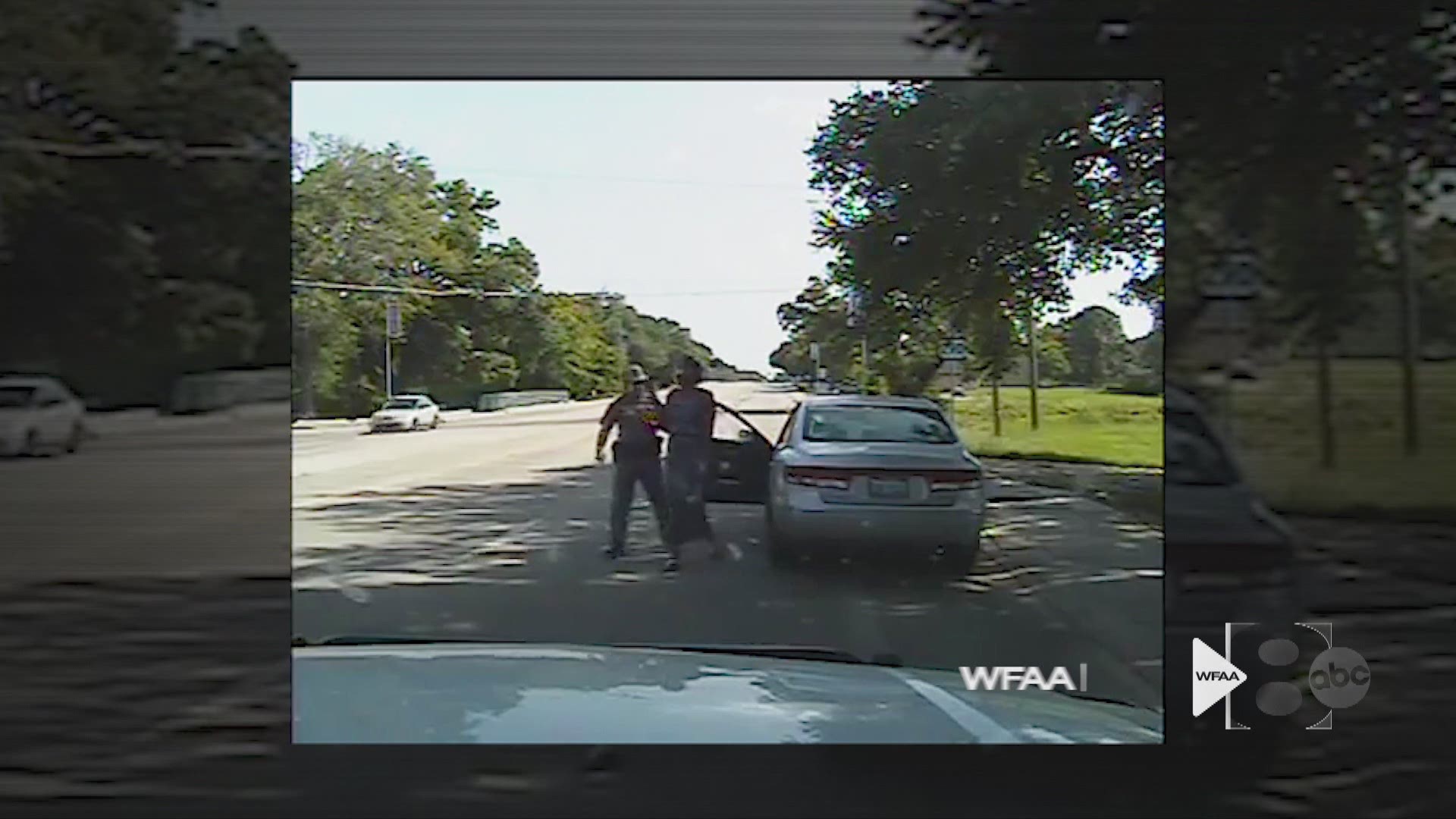 WALLER COUNTY, Texas — New cellphone footage from the now infamous traffic stop of Sandra Bland shows her perspective when a Texas state trooper points a Taser and yells, “I will light you up!”

Bland, 28, was found dead three days later in her Waller County jail cell near Houston. Her death was ruled a suicide.

The new video -- released as part of a WFAA exclusive in partnership with the Investigative Network -- fuels the Bland family’s suspicions that Texas officials withheld evidence in her controversial arrest and, later, her death.

Until now, the trooper’s dashcam footage was believed to be the only full recording of the July 2015 traffic stop, which ended in Bland’s arrest. The trooper claimed he feared for his safety during the stop.

The 39-second cellphone video shot by Bland remained in the hands of investigators until the Investigative Network obtained the video once the criminal investigation closed.

Watch the video here or below.

Bland’s family said they never saw the video before and now call for Texas officials to re-examine the criminal case against the trooper who arrested Bland, which sparked outrage across the country.

Needham and other Bland family members believe the video was intentionally withheld.

“We also know they have an extremely, extremely good cover-up system,” Needham said.

Texas Department of Public Safety officials declined an on-camera interview but said the video was not withheld.

“The premise that the video was not produced as a part of the discovery process is wrong,” DPS said in a statement. “A hard drive containing copies of 820 Gigabytes of data compiled by DPS from its investigation, including the dashcam videos, jail video footage and data from Sandra Bland’s cell phone, was part of discovery.”

Though dashcam footage shows that Bland has her phone in her hand during the confrontation with the trooper, officials never publicly released the footage.

Cannon Lambert, the attorney who represented the Bland family, said the video was not produced during discovery, which was done under seal, in their federal lawsuit.

“I’ve not seen it,” said Lambert, when shown the video by Brian Collister, chief reporter with the Investigative Network.

“If they had turned it over, I would have seen it, Brian. I’ve not seen that,” Lambert said when shown the video in his Chicago law office.

Lambert and Bland family members said the video takes them inside her car, where they can experience the confrontation and her arrest as if through Bland’s own eyes.

Bland was on the way to the grocery store when DPS Trooper Brian Encinia pulled her over for failing to use her turn signal when she changed lanes. The initial stop was recorded on dash cam.

Encinia asked Bland to put out the cigarette she was smoking. She refused, and he opened her car door and threatened to drag her out.

At this point, Bland began recording Encinia with her cell phone just moments before Encinia pulls his Taser, points it at Bland and says, “I will light you up! Get out! Now!”

After the arrest, Encinia told authorities that he feared for his life and didn’t know what Bland could grab inside her car and purse.

“My safety was in jeopardy at more than one time,” Encinia told investigators.

Encinia was fired from the DPS and indicted by a grand jury for perjury, a charge that was later dropped when Encinia gave up his license and agreed to never work as a cop again.

No Waller County lawmen were indicted in connection with her jail cell death.

The Texas Rangers and Federal Bureau of Investigation searched Bland’s phone during their joint investigation and discovered her video two months after the traffic stop and her death. But Bland’s family says it was never given to them.

They filed a federal wrongful death suit against Waller County and Texas DPS. The suit was settled in 2016 for $1.9 million.

As part of the settlement, the Bland family was required to return all evidence given to them as part of the federal court proceedings. They say the cellphone footage was never part of the discovery they received.

Despite repeated attempts, still no comment from anyone with the Texas Attorney General's office, which represented DPS in the federal civil lawsuit filed by the Bland family.

DPS officials said they provided all the evidence required of them as part of the lawsuit. An investigative report mentions the cellphone video, but the mention is buried more than 60 pages into the document.

“He sees exactly what’s in her hand,” Lambert said of the cellphone recording. “How can you tell me you don’t know what’s in her hand when you’re looking right dead at it. What did she do to make him feel his safety was in jeopardy? Nothing.”

In the video recording, Bland tells Encinia she has “a right to record.”

“He gets upset but before that ever happened, we had seen her reach out of view on the passenger side,” attorney Chip Lewis said. “That is the impetus to get her out of the car.”

Special prosecutor Darrell Jordan told the Investigative Network that he did have the video. Because grand jury proceedings are secret, it’s unclear whether the video was shown to Waller County grand jurors.

In early 2015, Bland began posting videos on YouTube that she made with her phone, using the title, “Sandy Speaks.” She made videos often, discussing subjects such as officer-involved shootings of unarmed black men and compliance at traffic stops.

For Bland to have recorded some of her last moments before the downward spiral that ended in her death is not unexpected, but still jarring, her family said. They want the investigation into the arrest by the trooper re-opened.

“[The video] not only shows that [Encinia] lied, but that he really had no business even stopping her, period,” said Shante Needham. “And at the end of the day, he needs to go to jail.”

"It is troubling that a crucial piece of evidence was withheld from Sandra Bland's family and legal team in their pursuit of justice. The illegal withholding of evidence by one side from the other destroys our legal system's ability to produce fair and just outcomes. As Chair of the House Committee on County Affairs that looked into the death of Sandra Bland, I will make sure that the Committee will also look into how this happened.

I am glad to see that the Sandra Bland Act is already making a difference in terms of better training for jailers and new officers. Additionally, through new data reporting requirements regarding traffic stops, the Act has already helped push local reforms and key legislative policies forward such as House Bill 2754 by Representative White, of which I am a Joint-Author of, that prevents arrests for nonjailable offenses. HB 2754's policy was part of the original Sandra Bland Act as filed last session. I am proud that the Act has had a positive impact and will continue to make a difference in the future."