Some vaccine mandates seem to have converted hesitant workers at companies across the country, but employers are still dealing with holdouts. 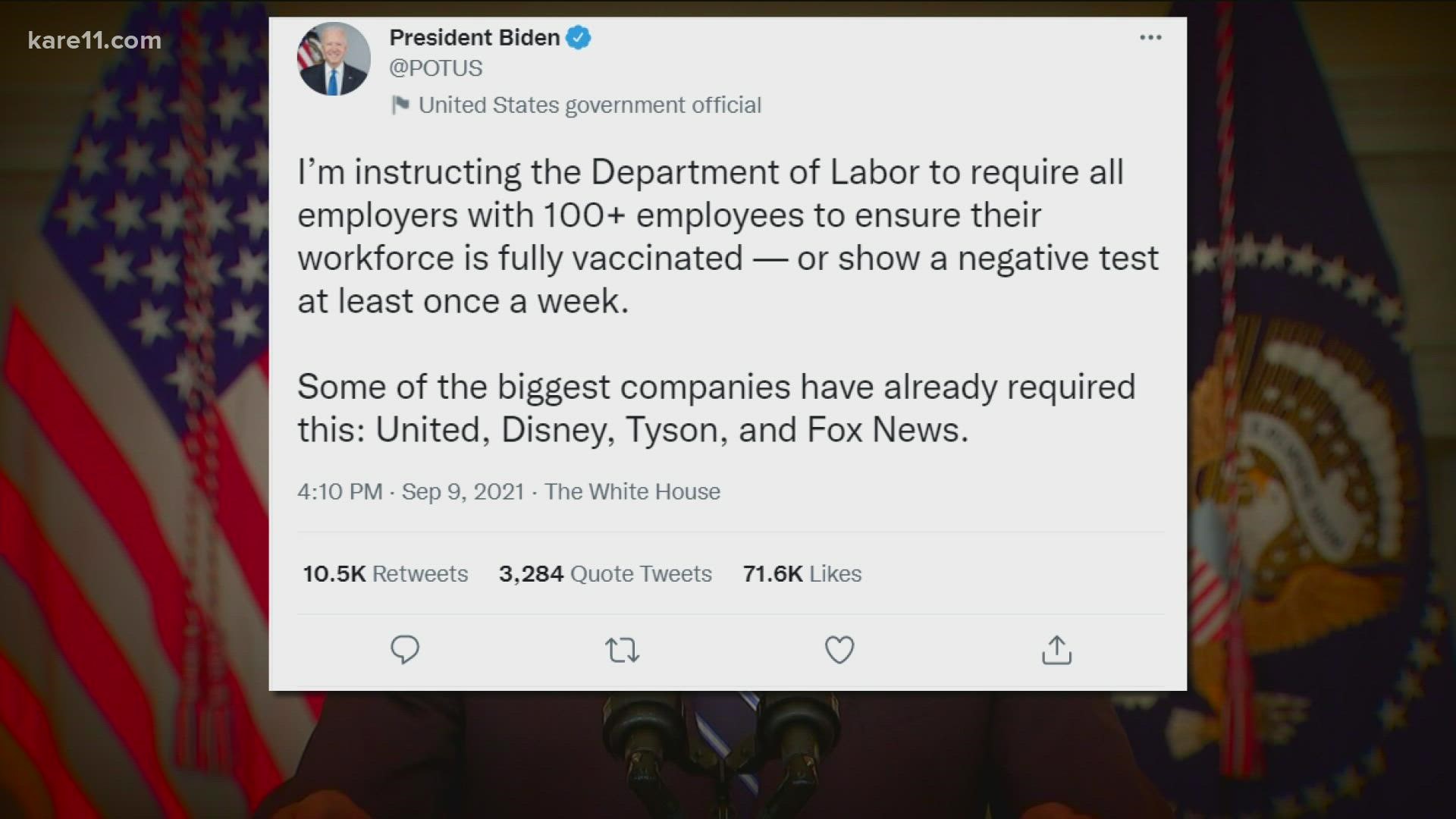 NEW YORK — Businesses that have announced vaccine mandates say some workers who had been on the fence have since gotten inoculated against COVID-19. But many holdouts remain — a likely sign of what is to come once a federal mandate goes into effect.

Even before President Joe Biden's Sept. 9 announcement that companies with more than 100 workers would have to require vaccinations or weekly testing, dozens of companies, including Amtrak, Microsoft, United Airlines and Disney issued ultimatums to most workers. And smaller companies in New York, San Francisco and New Orleans have been required to implement mandates for customers and workers.

Some mandates seem to have converted hesitant workers, but employers are still dealing with holdouts. United said late Tuesday it will begin terminating 593 employees over the next few days for refusing to get vaccinated. Other companies are offering alternatives, including weekly testing or working remotely or away from other staff.

The federal mandate will cover as many as 100 million Americans — private-sector employees as well as health care workers and federal contractors. It is a high-stakes gambit by the president to boost the vaccination rate in the U.S. About 77% of American adults have had one dose of the vaccine, according to the CDC.

In August, San Francisco became the first major city in the nation to require proof of full vaccination against COVID-19 for people dining inside restaurants, with employees having until Oct. 13 to get the shot. Akash Kapoor, founder of the Curry Up Now Indian restaurant chain, said more than 90% of his employees in his downtown San Francisco location are now vaccinated, with one or two per store refusing. He’s making unvaccinated workers get tested twice a week.

“It lets the employees who are vaccinated feel safe,” he said.

Alejandra Segura, 28, a senior learning and development coordinator at Curry Up Now, said she was worried about having a bad reaction to the vaccine, so she held off. But the vaccination mandate spurred her into action, and she received her first dose of the Pfizer vaccine on Sept. 20.

“It's a good thing we're required to get the vaccine, to ensure people's safety,” Segura said.

“The experience says these mandates do move the needle quite a bit on employees’ willingness to get vaccinated,” said Laura Boudreau, an assistant professor at Columbia University who studies labor issues. She said she believes that only a tiny fraction of employees will quit — likely those already close to retirement and who strongly distrust vaccines.

The Biden administration has said that companies will face $13,600 fines per violation and mandatory weekly testing will be the alternative to being vaccinated.

The question of whether employers or the government will pay for mandatory tests has yet to be answered. Regulations from the Occupational Health and Safety Administration, the office charged with implementing the mandate, will be drafted over the next few weeks.

Meanwhile, COVID-19 cases are surging in the U.S. The seven-day average COVID-19 deaths climbed above the 2,000 threshold last week for the first time since March. And this week, a number of state deadlines arrive for health care workers to get vaccinated, raising fears of worsening staff shortages in hospitals and nursing homes if some opt to quit or get fired or suspended.

A poll from The Associated Press-NORC Center for Public Affairs Research shows that about 59% of remote workers favor vaccine requirements in their own workplaces, compared with 47% of those who are currently working in person. About one-quarter of workers — in person and remote — were opposed.

United Airlines officials say their mandate has worked. About 96% of the airline’s 67,000 U.S. employees have been vaccinated and another 3% are seeking an exemption, which could result in being placed on unpaid leave. Fewer than 1% will be fired, which officials said would not affect airline operations.

Pilot unions at American and Southwest are asking the Biden administration and Congress to have the option of weekly testing or showing immunity by previously contracting COVID-19. The president of the American Airlines union warned that “mass terminations” of unvaccinated pilots could cause a shortage of pilots during the December holidays. Neither American nor Southwest has said whether they will require vaccination or offer testing as an alternative.

Delta Air Lines stopped short of requiring vaccination but said that starting in November, unvaccinated workers on the company health plan will pay a $200 monthly surcharge.

Delta’s chief health officer, Dr. Henry Ting said that about 20,000 employees weren’t vaccinated when the company announced plans for the surcharge. In the past month, nearly 9,000 of them received at least one shot. About 82.5% of Delta’s 75,000 employees are fully vaccinated. Fewer than five workers have sought a medical exemption and no one has asked for a religious one, Ting said.

“The first 20,000 were very eager, and we got to about 70% (vaccinated) rather quickly,” Ting said, but the remaining unvaccinated employees “are a very different group.”

Ting said the holdouts are more likely to be Black, brown or younger than the first group. “Many of them are not anti-vaxxers,” he said. “They were on the fence, they’re scared, they want to make their own decision on their own timeline.”

Some other big companies who have announced rules requiring in-office workers be vaccinated now or in coming weeks include Google, McDonald's (U.S.-based office workers), Microsoft, and Goldman Sachs, among others.

Amtrak last week pushed back its deadline for all workers to be vaccinated by three weeks to Nov. 22. Currently about 60% of its workers have had at least one shot.

Meatpacking giant Tyson Foods, whose workforce has been hit hard by the coronavirus, is requiring all of its workers to be vaccinated by Nov. 1. About 80% of Tyson's more than 100,000 workers have received at least one dose of the vaccine, up from 50% when it announced the mandate on Aug. 3.

The company has introduced incentives for workers to get the vaccine. It's poultry division is running a lottery, once a week for five weeks, for $10,000 each week for workers who have received at least one dose of the vaccine.

New York began enforcing a vaccine mandate for certain businesses on Sept. 13. Art Depol said that about 16 of his 24 staffers at Mooyah Burgers, Fries & Shakes in Times Square were already vaccinated, three got the vaccine when it was required, and five refused.

Depol is working on setting up weekly testing for the unvaccinated workers so he can keep them on the schedule.

“It's so difficult to find good people right now, I don’t want to lose the good people I have over this."