A photo taken 102 years ago is as relevant as ever. 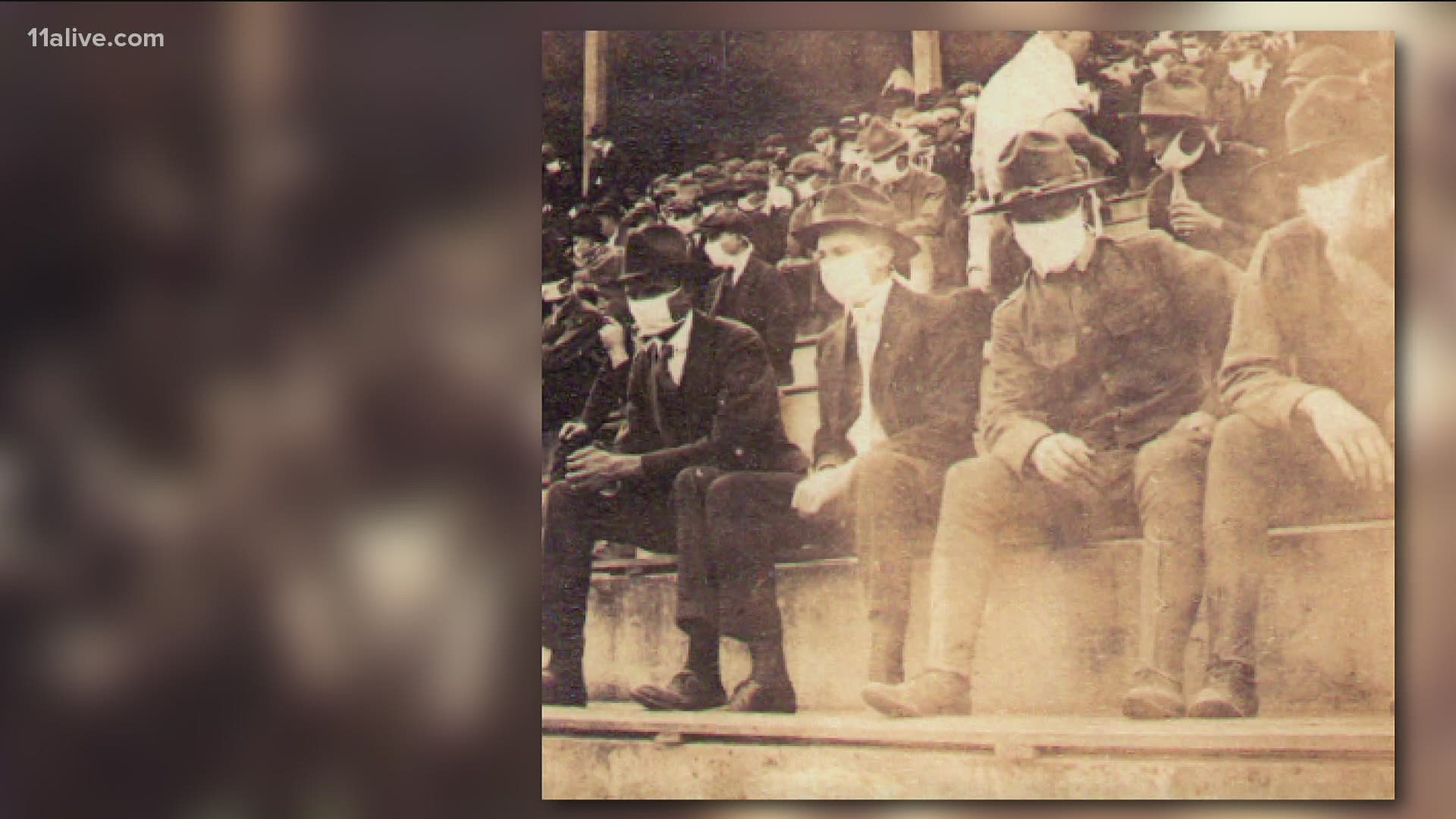 There are few answers on when they may be filled again. While leagues and conferences discuss a return to sports, many of those plans bar fans for the foreseeable future.

While times are unique, it's not the first time sports has been affected by a pandemic.

"The virus is on a similar time track," said Andy McNeil, a Georgia Tech graduate and mechanical engineer. "History does repeat itself."

RELATED: Preparing for the return of sports

McNeil has had an image in his office for years of Grant Field at Georgia Tech in 1918. One image shows the team on the field. The other, the stands - filled with besuited fans with masks over their faces.

A note on the back of the picture reads "Georgia Tech during 1918 pandemic."

McNeil first found the images as a child. When he rediscovered them later, he had the originals blown up so he could frame them.

It's been a talking point for years as people inquired about the pictures. An era that once seemed unimaginable, now a reality.

Credit: Andy McNeil
Fans at a Georgia Tech football game during 1918 pandemic. The photo was taken by graduate Thomas Carter.

"When the coronavirus started, I was like, 'Wow, I had a family member who lived through this'."

McNeil's great-grandfather, Carter, loved adventure. Hoping to learn more about the Flu Pandemic in 1918, McNeil listened to old tapes his family had produced. In them, were interviews with Carter.

He was smart - graduating from Georgia Tech. But also daring. He would cling onto the back of cars traveling through downtown Atlanta. He built a boat and smuggled libations into the country during the prohibition.

Perhaps attending a football game during a pandemic was seen just as daring.

"People understood the ramifications of the Spanish Flu at that time," McNeil said. "Would he be alive if he didn't wear a mask? Who knows."

During the deadly second wave of the 1918 pandemic, Georgia Tech still managed to play seven games, six at home and one on the road that was rescheduled for Pitt. It was the only game that was modified because of the pandemic. The team, led by John Heisman, played games in front of fans.

Society has come so far in some ways. The world is currently rushing to produce a vaccine for COVID-19, yet the image of a football game in 1918 mirrors what life looks like today, with many people donning face coverings.

"It's a dose of reality," McNeil said. "Before coronavirus, I couldn't imagine being at Georgia Tech with a mask on. A pandemic never crossed my mind. It's a reality that history repeats itself, and we can get through it, but we have to do the right thing."

RELATED: When will sports fans feel safe in stadiums again?

McNeil doesn't claim to be an expert. But he's frustrated when he sees people not wearing face coverings, which is recommended by the CDC. Perhaps if everyone did, the pandemic would end sooner. Consequent waves would wane. And sports could return sooner than later.

"My great-grandfather lived a full life, he made it through," McNeil said. "Hopefully that inspires people that everything will be okay, eventually."

11Alive is focusing our news coverage on the facts and not the fear around the virus. We want to keep you informed about the latest developments while ensuring that we deliver confirmed, factual information.

We will track the most important coronavirus elements relating to Georgia on this page. Refresh often for new information.

RELATED: The future of college athletics is still unclear