Fort Worth police chief apologizes to widow after department mistakenly detained her, raided her home over a year ago

Nelda Price asks for no-knock raids to be reduced or done away with. Chief Neil Noakes said such raids now need approval by a deputy chief or higher-ranking officer. 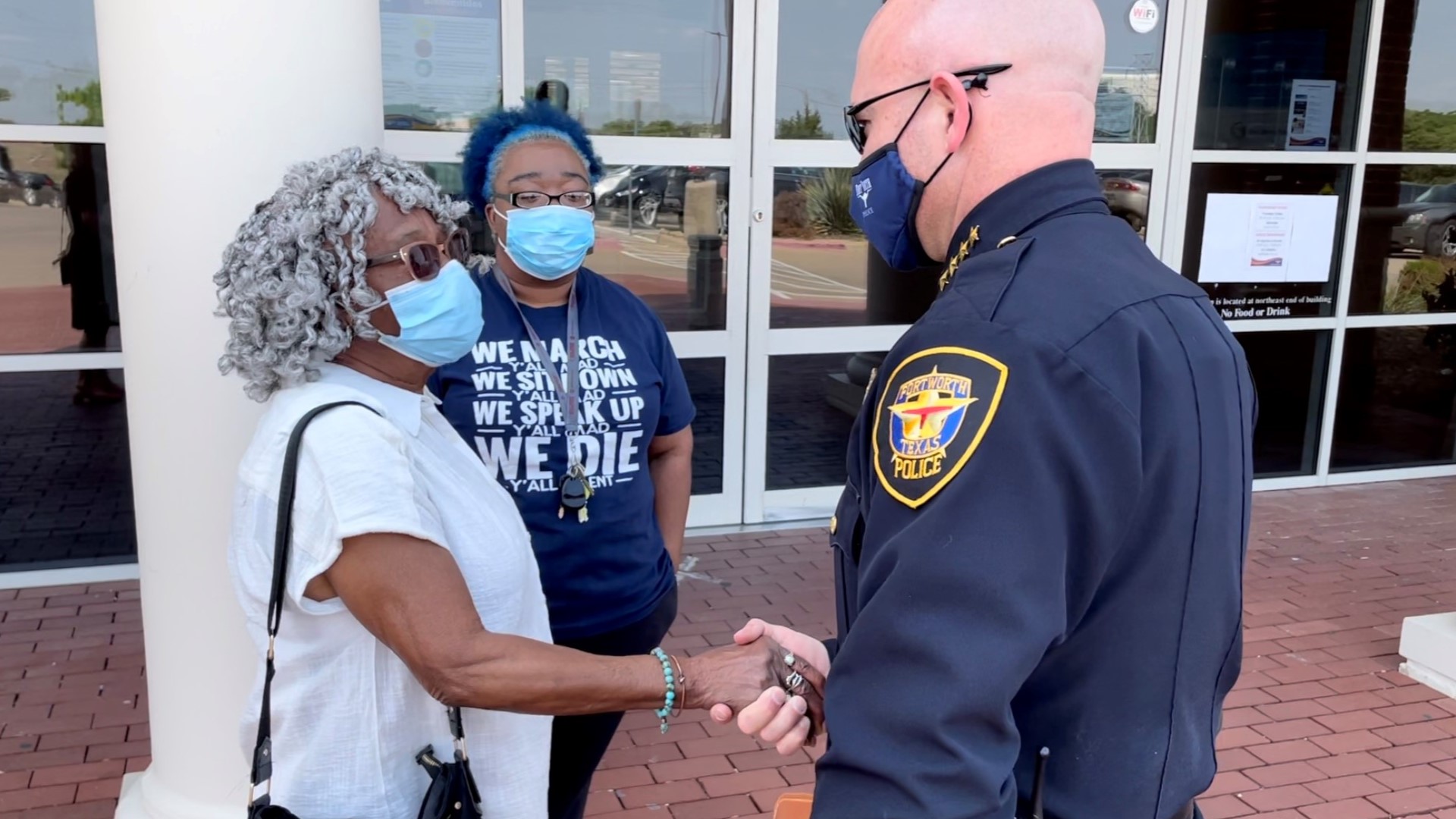 FORT WORTH, Texas — Nelda Price received something Wednesday that she's been waiting more than a year for, a handshake, and an apology from Fort Worth's top cop.

It came on the heels of a WFAA report that detailed how Price's home was the target of a no-knock drug raid fueled by bad intel.

The report explained how Price was seeking answers regarding how she and her elderly husband were believed to be engaged in crime, specifically narcotics.

"It took over a year for us to get to this point today, and we talked about how the city could do things better in terms of apologizing when they make mistakes," said Price's attorney Kay Van Wey.

WFAA also learned an explosive detail following the meeting that increases the severity of the mistake police made: the raid was a joint task force operation involving the U.S. Drug Enforcement Agency.

In March of last year, Price and her husband were detained in their pajamas after Fort Worth police knocked down their front door and put their hands in flex cuffs, according to a lawsuit filed against the city by the family.

All the while, SWAT searched their home for drugs.

Officers told a judge that Price's home was likely a drug house and that they'd likely find narcotics inside, per a search warrant filing.

The officers also requested that they have permission for forced entry with no warning.

Price and her husband John were 69 at the time, both Black Americans.

The approved warrant reads that knocking “would be futile, dangerous or otherwise inhibit the investigation.” However, the raid came up with nothing.

“When we stood up, the police were already coming to our front door,” Nelda Price told WFAA. “…It was just horrible.”

What bothers Price most is that John died weeks following the raid.

“He's always taken care of us no matter what,” Price told WFAA.

According to her lawsuit, Price and her husband were put in flex cuffs, which look like zip ties, and ordered to stay on their front lawn.

“Fort Worth police officers guarded the Prices, as other Fort Worth officers proceeded to ransack the residence,” the lawsuit alleges.

“They never said one reason as to why they were here,” said Price.

At his age, Price said her husband had problems with his blood pressure.

Credit: Price Family
A photo of John Price. Nelda Price says he was best at being a handyman around the house.

“I asked them if they could get his medicine, because I could tell that his blood pressure would go up,” Price told WFAA.

“Despite numerous desperate pleas from Mrs. Price, Fort Worth police ignored their requests and continued their unlawful search,” according to the lawsuit.

Throughout it all, Price said she didn’t resist or act up.

“We didn't get rude,” she said. “We didn't, you know, get out of line with police because being Black, you know, you don't get tough.”

John was eventually treated. But 53 days later, he died.

Price told WFAA she believes the stress of the “no-knock” search contributed to John’s death.

Credit: JOSEPH HUERTA
Nelda Price, 69, is at odds with the City of Fort Worth. Her husband died after a no-knock raid fueled by bad intel was done to their home.

Fort Worth officials have not released body camera video of the raid and have declined to comment about what happened, claiming that Price's lawsuit prevents them from doing so.

In a state court, the City has denied any allegations made by Price in her lawsuit and has also battled to keep her from interviewing city officials and gathering evidence like body camera footage to support her suit.

A judge recently ruled in the City's favor, denying Price the ability to gather any evidence she may need to continue her legal battle.

She may now turn to a federal court to plead her case.

A search for answers

WFAA has been trying to get a clear understanding of how such a mistake could happen to Price from Fort Worth police for months.

Dating back to October 2020, records requests for body camera footage and information regarding why the Price home was targeted have been ignored.

After new Fort Worth Police Chief Neil Noakes was sworn in last February, WFAA expected those odds to improve.

But in his first sit down with WFAA, Noakes declined to answer questions about the raid on Price’s home.

“I’m not able to comment on that due to the ongoing lawsuit right now,” Noakes told WFAA. “I apologize, but when we can say more, we will.”

But Noakes, alongside the City's attorney, did agree to meet with Price and Van Wey Wednesday at a public library on the east side of the city.

Coming to the table

Noakes arrived for the meeting around 3:30 p.m. Wednesday, April 14 and greeted both Price and her daughter.

Cory Session, a member of the city's Race and Culture Task Force, was also in attendance.

WFAA didn't follow the group inside but talked with Price, Van Wey, and Session afterward.

They said Noakes listened intently to Price and wants to meet with her again.

"He seemed to be very interested in seeking solutions to the problem," said Van Wey.

"You know, he basically did apologize," Price said. "And I feel like he really understands that something has to be done."

Price requested for the body camera footage to be released and asked that no-knock raids be reduced or done away within the city.

Noakes reportedly told her that such raids now need approval by a deputy chief or higher-ranking officer. That policy change was made after Price's home was ransacked.

"I've known the chief for a while, and he's always kept his word," Session said. "I'm here to make sure that he keeps his word."

Noakes declined to comment as he left the meeting, but his apology went a long way per Price.

She said her trust is with him, for now.

"I think he'll do everything in his power to resolve issues like this," said Price.