Maria and Jake Grey of Sanger have a daughter with a rare chromosomal disorder. Even with health insurance, they spend upwards of $15,000 a year out of pocket on her health care. 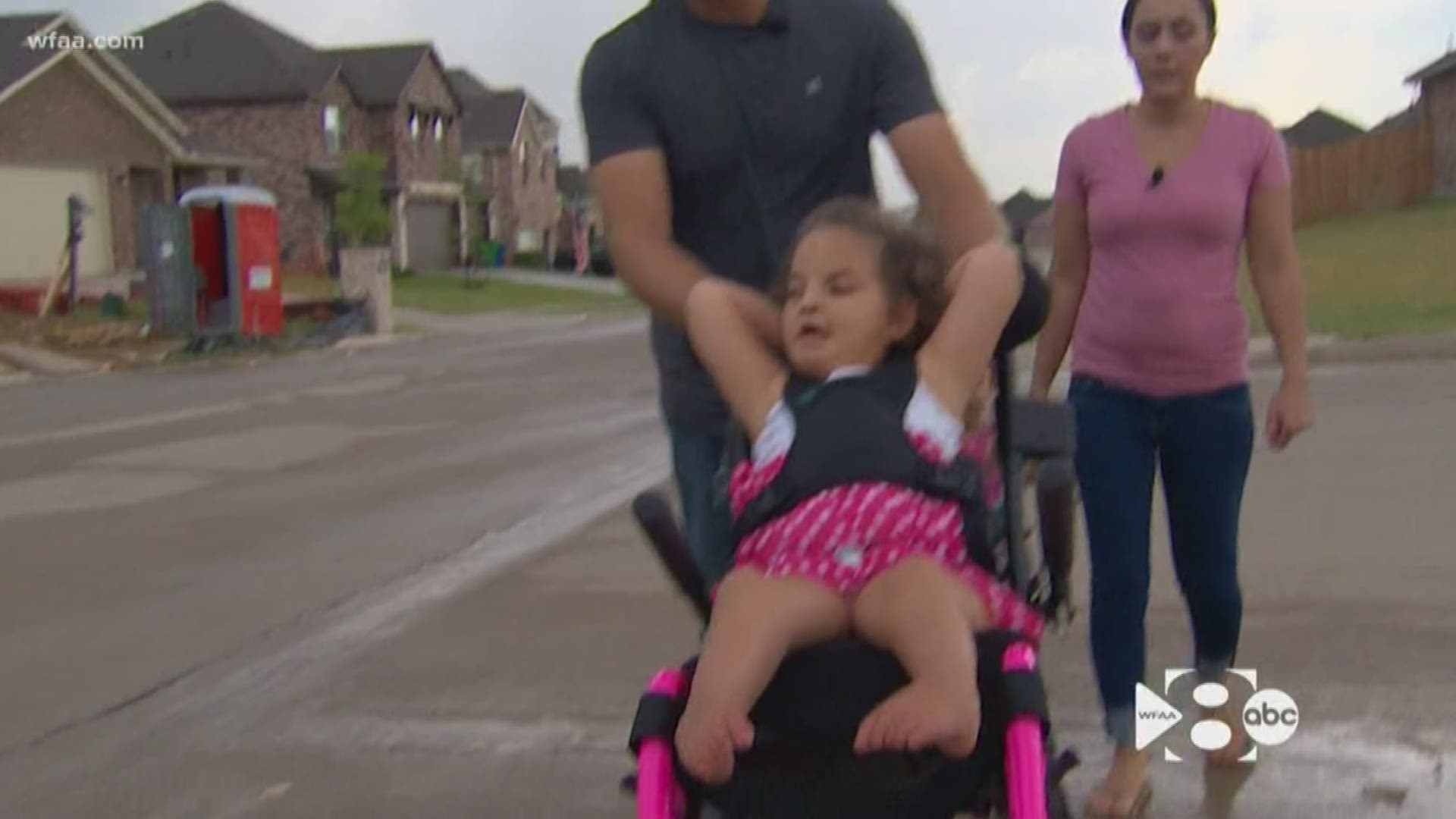 SANGER, Texas -- Maria and Jake Grey of Sanger have a daughter with a rare chromosomal disorder. Even with health insurance, they spend upwards of $15,000 a year out of pocket on her health care.

The Greys, who now live in Sanger, have two little girls: Fairen, who’s two, and Brighton, who’s six—but developmentally is still a baby.

Caring for her is something they feel blessed to do, but it has been difficult. “You know, when you have a newborn, everything gets really stressful. You really have to adapt to someone needing you 24/7, all the time,” Maria explained. “We’ve had a newborn for six-and-a-half years.”

Even with health insurance, the family says they spend up to $15,000 each year out of pocket for Brighton’s care. That’s more than 30 percent of their annual income.

Because Jake, an Army veteran, makes about $40,000 a year, the family doesn’t qualify for Medicaid. And while there is state assistance available, there are tens of thousands of people on the waiting lists. Some have been waiting up to 14 years. On one list, Brighton is number 59,979, the family says.

So the Greys are considering something extreme in order to afford their child’s care. “It would just be to get a divorce. It would be to not be together to get our child what we need,” Maria said.

A divorce, so Maria could on paper become a single, jobless mother of two and qualify for Medicaid.

“We’ve just struggled and struggled with it, and now we’ve gotten to the point, where we feel it’s a real possibility,” Jake said.

“For a family like this, they really are in a tough spot,” said Dr. Thad Miller, a health care policy expert at UNT Health Science Center in Fort Worth. He said the average American spends about $600 on health care a year. We asked him to compare that to what the Greys spend caring for their daughter. “It’s very high,” he said, calling it “extreme.”

Dr. Miller says he’s never known a family to get a divorce because of circumstances like these. But he believes there are many, many other families in this very same position, especially considering the numbers of people on the assistance waiting lists.

“It's just shocking, and I really think it speaks to our need to really rethink what we do and how especially for the most vulnerable,” Dr. Miller said.

“For someone to kind of make you choose between your marriage and your child is just—it's just a really weird spot to be in,” Jake said.

“We promised to each other and to her that we’d do whatever we could do to make her life, however long she’s going to be with us, as good as possible,” Maria said.

It was nine years ago they took their wedding vows on a beautiful Florida beach.

“We should’ve been married outside that day, but it rained,” said Jake Grey as he looked at his wedding photos with his wife Maria. “Then we got the rainbows,” Maria said.

For the Greys, the meaning behind their vows has only gotten stronger with every passing year. “We wouldn’t have made it this far without each other, that’s for sure,” Maria said.

“I can't imagine going through what we’ve been through with anybody else,” Jake said.

They just never imagined that could mean a divorce.