Tens of thousands of people have watched video of a Cedar Hill High School student knocking papers off a teachers desk, cursing and then shoving the teacher's face. 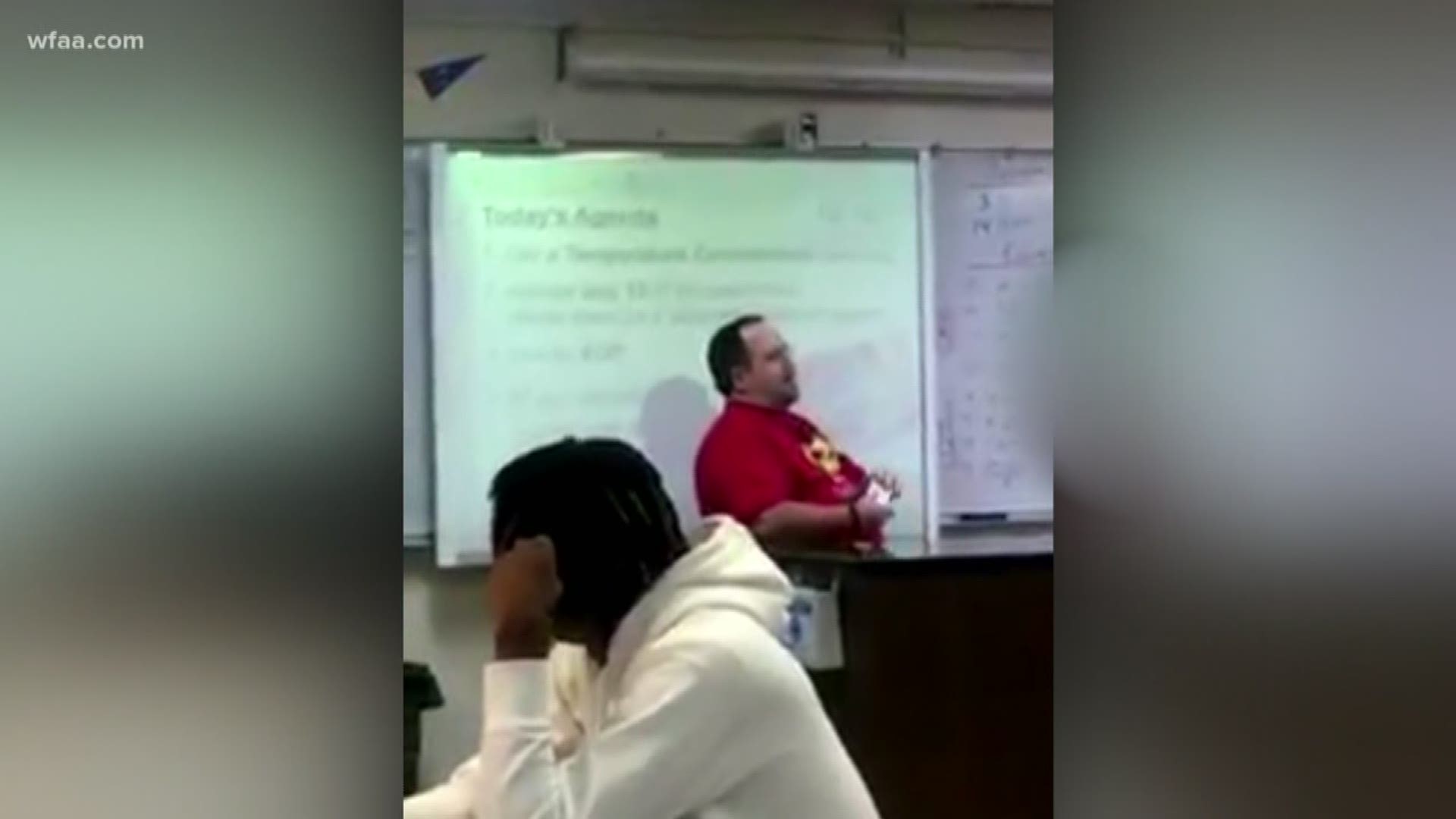 Cedar Hill — Tens of thousands of people have watched a video of a Cedar Hill High School student knocking papers off a teachers desk, cursing and then shoving the teacher's face.

It all happened over a cell phone, principal Michael McDonald said. The student was upset that the teacher took it away because it wasn't supposed to be out in class.

In the video, you can see physics teacher Bobby Soehnge calmly hand the phone back.

"I was shocked to see such egregious behavior," McDonald said. "That's not something we condone."

Soehnge told WFAA that the student has gotten frustrated at times throughout the year, but has never done something like this.

"He lost his balance and acted out," Soehnge said.

A student in the class shot cell phone video, which circulated around the school. It went viral when parent Chris Hunt posted it on Facebook.

"It broke my heart a little bit, to be honest," Hunt said.

That's why Hunt and his daughter rallied around the teacher Wednesday.

Hunt brought several gift bags with t-shirts and a gift card for Soehnge.

"I just want to let him know I appreciate him for how he handled that," Hunt said.

More parents and students are doing the same, said McDonald.

According to Soehnge, deescalating the situation was his priority.

"The important thing was to not add any energy into the dynamic that would make the situation more complicated," Soehnge said.

But while the district says the student has been disciplined, the incident didn't end the way you might expect.

"{The teacher} actually met with the student after the class, they talked, they hugged," said McDonald.

"He spent a lot of time working with the student through the course of the year. They have a great relationship and that was just a bad day the student was having."

The student and his mom apologized, according to Cedar Hill ISD. He's not being identified due to privacy laws, the district said.

Soehnge says he doesn't hold a grudge, adding that a classroom is a place for growth whether that be in academics or life.

"There's a way to solve complex problems whether it's in Physics or even in life," he said. "I think because he was so willing to accept ownership and the consequences of his actions show that he's maturing--and that's what we always want as a teacher."

While some on social media have questioned whether Soehnge should have acted differently, the school says, he's an example.

"It's brave of him and it shows other people that you can control yourself and do things differently," said student Shamya Hunt, student

Hunt runs a mentoring organization called the Dream Team. He said he wants to talk to the teenager in that video.

"I was that child so I could relate," he said.

And he said Soehnge taught us all a lesson in remaining calm and showing the student compassion.