Lexingten Phillips knew she would need to be a source of strength for her mother and that she would also have to look after her two younger brothers as well. 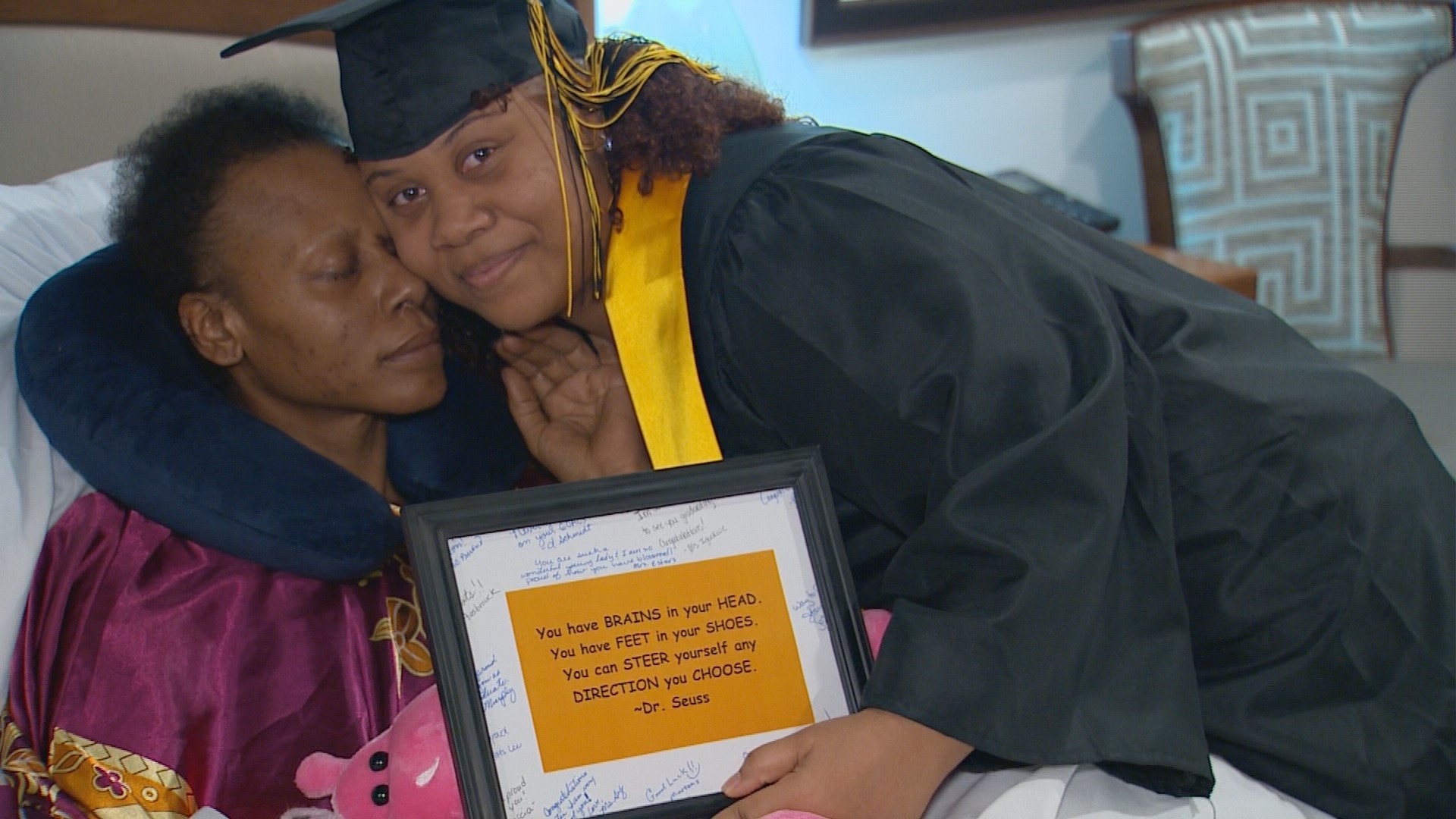 DALLAS, Texas — A touching moment took over the halls of the T. Boone Pickens Hospice Care Center in Dallas Monday night after a daughter graduated from high school near her mother's bedside.

That daughter, 20-year-old Lexingten Phillips, stepped away from high school after her mother Guinevere Edmwonyi was diagnosed with stage 4 breast cancer in 2016.

Phillips, at the time, realized that her family was facing a lot and as the oldest in the family, her leadership would be needed.

Her mother Guinevere had just given birth to a child, Malik, 3,  and her other younger brother Adeolu, 13, would be heading into middle school.

Guinevere's husband, according to family, lives in Africa after being deported in 2014.

Phillips knew she would need to be a source of strength for her mother and that she would also have to look after her two younger brothers as well.

For any teen, that takes guts.

Guinevere often went to radiation treatments with Phillips' grandmother, and the 20-year-old would take care of everything else at home.

Per Phillips, she would help with medication, diet, and overall needs.

It wasn't until February of this year when Phillips got enough free time to go back to school to finish her education.

She and her family now live in Forney, and through the Forney ISD Goals program, Phillips was able to complete her high school education at her own pace.

Her teacher Catrina Ester said that Phillips came in with some credits, but basically started out her Forney ISD career as a freshman.

"Lexingten's struggles have been immense and she is an awesome young lady and very deserving of the outpouring of support," Ester said.

And as Phillips' education continued, Ester said it became apparent that Guinevere's cancer wasn't getting any better.

"The more her story came out the more I knew we were working with a tight timeline for her to reach her goal of graduating before her mother passed."

Phillips was supposed to complete her education for her high school diploma by the end of this week, but when Guinevere had a sudden trip to the hospital that sped things up.

Guinevere was admitted to hospice care Sunday night, so it was on Forney ISD to put on Phillips' graduation right away.

So family, friends, and other Forney ISD staff lined the hall of the floor where Guinevere is now resting.

In a cap and gown, Phillips walked down the hall to both cheers and applause.

Then, family and as many people as possible fit into Guinevere's room for the ceremony.

With tears in her eyes, Phillips put her tassel on the other side of her cap as the principal for the Forney Learning Academy announced that the 20-year-old had graduated.

A smile was on Guinevere's face as the two hugged.

"You made it baby," Guinevere said.

Phillips told WFAA that she was overwhelmed.

"It was so hard," Phillips said. "It feels good to be able to get it and do it and...I just have no words. This feeling...for my mama to be able to be here to see it, I just didn't realize I had this much support and I'm very thankful for it."

Phillips will have some tough chapters in the coming days, but on Monday night there was nothing that could take away the moment she shared with her mother...not even cancer.

If you'd like to help Phillips as she plans for her future,Forney Community Ministries is raising funds for her.

Click the donate page at the bottom of the site, then select "Phillips Family Assistance" from the dropdown menu.