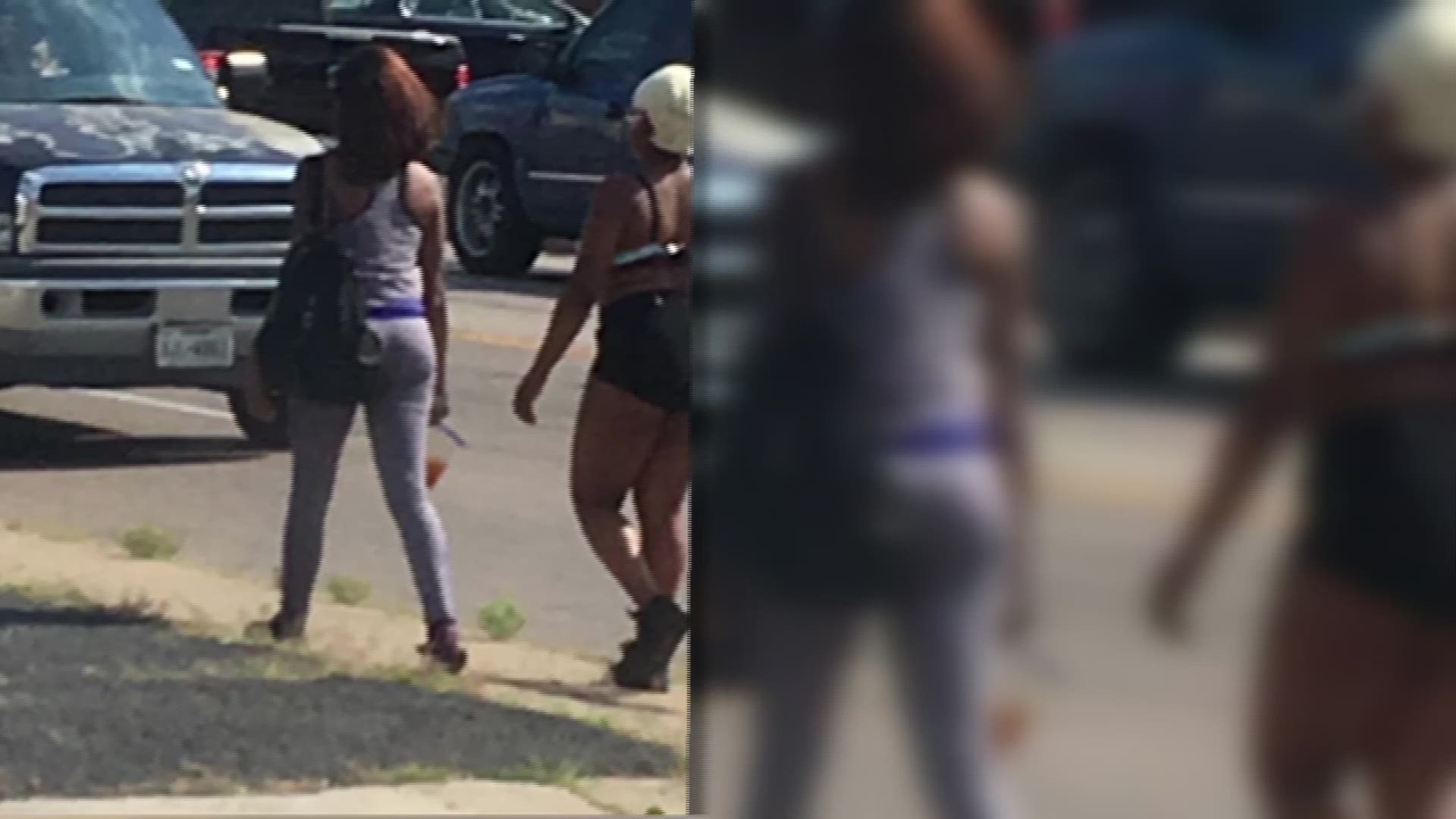 DALLAS -- Prostitutes can be seen boldly walking around even in downtown in the middle of the day and right in front of an elementary school.

"We've noticed an increase. We think they are coming from all over,” said resident Barbara Sanchez.

It’s, unfortunately, the new reality. Everywhere you turn in Dallas, you see them.

We sat down with a group of residents in Northwest Dallas who say their neighborhood is being overrun.

"You can tell the prostitutes have no respect, no fear absolutely no fear that they might get questioned or harassed or made to leave. They just come in droves,” said Sanchez.

"I know VICE has been cut out, but I think it's one of the more important departments that should be allowed to do their job,” said Brant Lucido owner of One Stop Automotive.

In one of her first actions as Chief, Hall got rid of the unit after learning it was under an internal investigation for how it handled gambling money.

Her critics say the inquiry was over poor paperwork and disbanding the unit was a bad idea. Randy Blankenbaker is a former Dallas Assistant Chief.

"Essentially what you have are officers who didn't fill out paperwork as well as they should have and that's an issue. I don't think you disband an entire unit over it,” said Blankenbaker.

Two chiefs inside the unit told Hall that problems were identified and changes were already underway. That didn’t stop Hall from hiring a separate company to look at the issues.

WFAA obtained a copy of the findings, which recommended the exact same solutions from an audit ordered by the two chiefs Gil Garza and Gary Tittle. She transferred and later demoted them. The independent company also recommended Chief Hall bring the VICE unit back.

"You can't expect patrol division to be able to step up and fill the void of a VICE Unit that has been very well trained in how to deal with illegal gambling, prostitution and liquor-related issues,” said Blankenbaker.

“We've been trying to let the police know what is going on, but they let us know their hands are tied that they are very short staffed,” said Sanchez.

Chief Hall responded to WFAA’s questions only in writing. She says the department has cross-trained narcotics detectives to serve as VICE unit officers until a new unit is formed this summer. She also said the Northwest Patrol Division recently conducted a prostitution operation that led to 35 prostitution-related citations.

Here are the questions to Chief Hall and her answers:

No Limit basically says you should implement the recommendations that Chief Tittle and Chief Garza had already come up with and had already started implementing. Was there really a need to disband the Vice Unit?

The recommendations were not that of former Assistant Chief Tittle and former Deputy Chief Garza, it was the result of an audit conducted by an internal investigative audit team. The recommendations were made in May of 2017. The No Limit assessment started on December 4, 2017. The Vice Unit was disbanded because the recommendations from the administrative audit from March 2017 that was provided to Chief Garza and Chief Tittle had not been made policy and/or fully implemented by October 2017. In a follow-up meeting in October 2017 regarding the status of Vice Operations, members of the audit team advised Chief Hall that proper procedures were not being followed and a supervisor in the Vice Unit told Chief Hall that the recommendations from the audit had not been put in place and were not being followed. Results of the No Limit Assessment were not returned until February 2018.

You said the reason for demoting the two chiefs was because they were not doing anything to make changes. Do you still believe that after the No Limit report?

No one was demoted as the result of the internal investigative audit. All commanders that chose to be interviewed for a position on the new Command Staff were given equal consideration. All promotional selections during the department’s re-organization of the executive ranks were made based on overall performance of each candidate. Selections for positions were made based on 21st Century Policing knowledge and implementations within the agency. Candidates with community and crime based initiatives were viewed more favorable.

Is there a timetable for bringing the Vice Unit back?

The department has crossed trained detectives in Narcotics to serve as Vice Detectives until the new unit is formed this summer.

We have interviewed residents and business owners being overrun with prostitution. They say things got much worse after the unit was disbanded.

The Department continues to investigate Vice complaints. Enforcement is done through trained Vice/Narcotics detectives and the patrol divisions. As an example, The Northwest Division conducted a Prostitution Operation Wednesday, May 9th through Wednesday, May 18th. The operation was in response to complaints from citizens regarding active street-level prostitution. The operation involved covert and uniformed personnel from Northwest and North Central, Community Engagement Units, Crime Response Teams and Deployment officers. The Operation produced the following results:

· (34) citations issued for Manifesting for the Purpose of Prostitution

· (1) Citation issued for Solicitation of Prostitution