Allan Springer oversees six fire stations in the city and dozens of employees. He is still employed with the department. 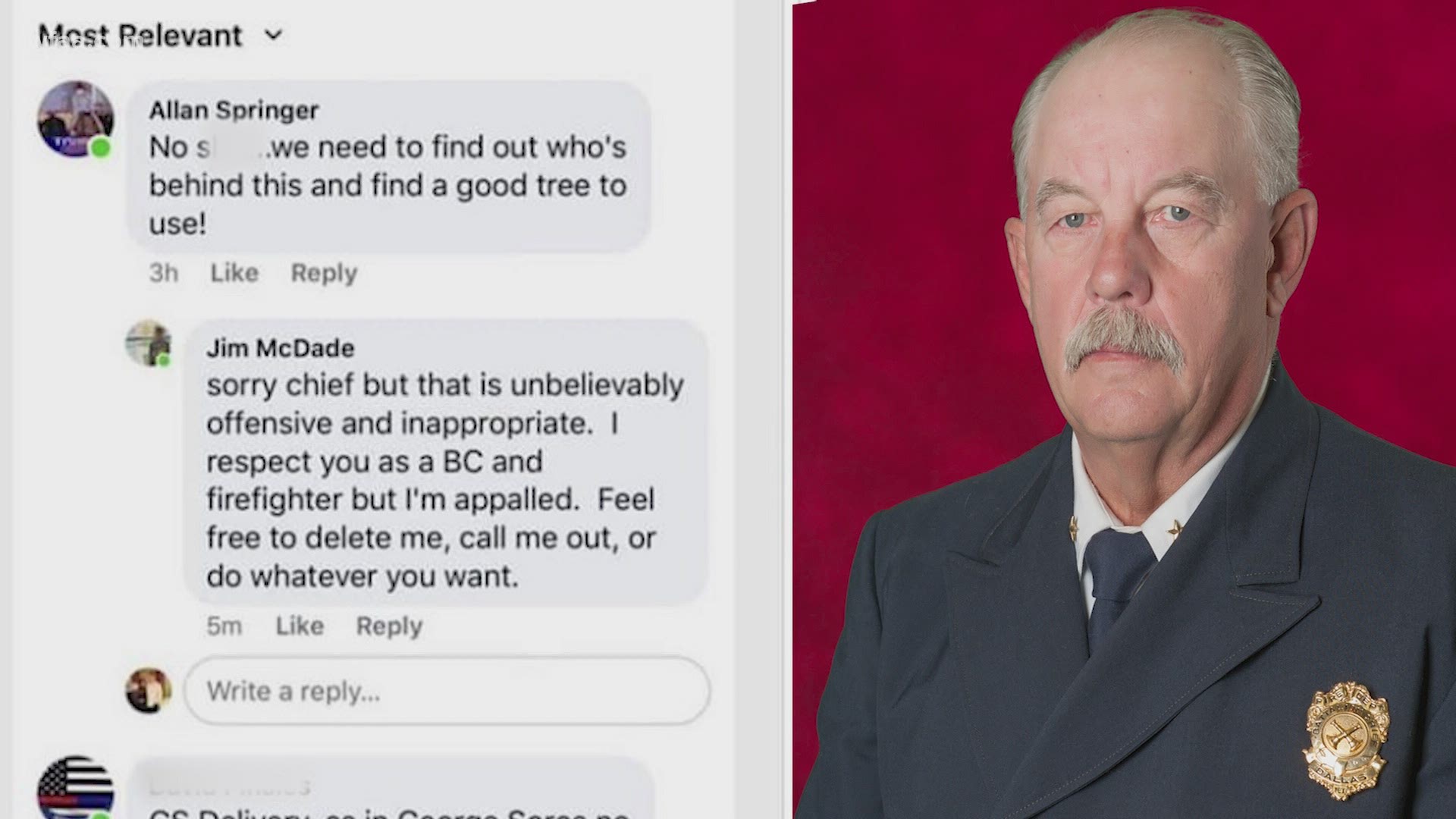 DALLAS, Texas — A battalion chief within Dallas Fire-Rescue is being investigated internally after a social media post involving him surfaced that at least one city leader and two of the department's unions found to be racist.

Battalion Chief Allan Springer is at the center of the investigation. According to department sources, he oversees six fire stations within the city and over 60 employees.

On May 31, a Facebook user posted multiple photos of bricks and brick palettes that were spotted in the middle of Black Lives Matter protests.

Questioning if they were dropped off to incite riots, Springer replied to the post saying, "No s**t...we need to find out who's behind this and find a good tree to use!"

Dallas Fire Fighters Association President Capt. Jim McDade called out Springer on Facebook and replied to his comment saying, "Sorry chief but that is unbelievably offensive and inappropriate. I respect you as a BC and a firefighter but I'm appalled. Feel free to delete me, call me out, or do whatever you want."

The post made its way up the chain of command inside Dallas Fire-Rescue, a department that has an estimated 700 Black employees.

On Thursday, Spokesperson Jason Evans told WFAA that Springer was being investigated, "by the department’s Internal Affairs Division to determine the necessary course of action going forward."

Evans didn't comment when WFAA asked if Springer was on leave or not. He did mention, however, that Springer is still employed with the department.

Thomas is seeking for Springer to be demoted or terminated.

"He has lost any confidence that anyone may have had in his ability to lead," Thomas said.

"It's unacceptable and we're not going to tolerate it. Treat people the way you want to be treated."

"As a chief with Dallas Fire-Rescue, you serve citizens of various backgrounds. Due to the diversity of the City of Dallas, there is no place for this kind of bigotry that Chief Springer has displayed. The members of our association feel uncomfortable under his leadership, due to these actions.   We are asking Chief Artis and the city manager to demote or terminate Chief Springer from his current position."

McDade echoed a similar message in his statement to WFAA:

“We do not condone any sort of racism in the Dallas Fire Department either between the firefighters or between firefighters and citizens. It’s intolerable to us.”

WFAA attempted to reach Springer for comment but was unsuccessful.