The Plano police shot a man Sunday after he opened fire inside the Plano Police Department. 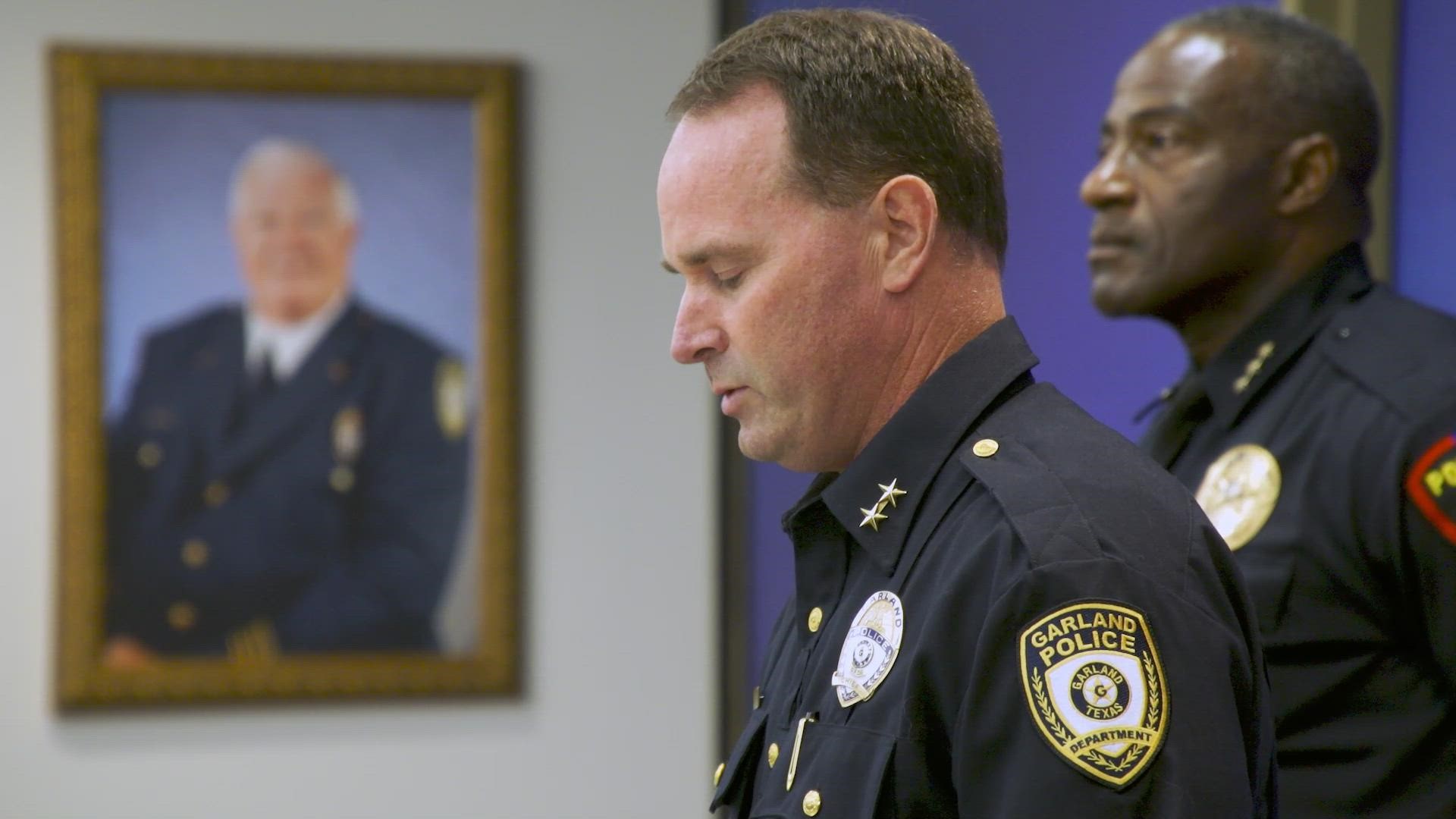 PLANO, Texas — Updated at 7:20 p.m. Monday with quotes from Garland and Plano police, the FBI, and the Rasheed family attorney.

The Sunday killing of a Lyft driver in Garland and a shooting inside the Plano Police department are related, police departments for both cities confirmed in a press conference Monday. The FBI is also now involved and said the attack might have been inspired by foreign terrorist organizations.

Officials said 32-year-old Imran Ali Rasheed shot and killed 26-year-old Lyft driver Isabella Lewis after picking him up for a ride in Garland on Sunday.

According to police, Rasheed then stole Lewis' car and drove to Plano Police Headquarters, where he started shooting inside.

Plano police shot him three times; he has since died, officials said Monday.

Both police departments are now trying to assign a motive. The FBI said Rasheed left a note in Lewis' car that is now a focal point for the FBI to determine if this was an act of terrorism. The FBI said Rasheed might have been inspired by foreign terrorist organizations, but wouldn't say what the note said.

The FBI said Rasheed was the target of a counterterrorism investigation from 2010 to 2013 to determine if he was a terroristic threat to America or supporting terrorist organizations. That investigation cleared Rasheed ultimately of being any kind of threat.

This is the suspect who killed Lewis and is now at the center of a terrorist investigation by @FBI to see if he acted alone.

The attorney hired by Rasheed’s family, Bubba King, told WFAA Rasheed was diagnosed with Multiple Sclerosis approximately five years ago, has struggled with that diagnosis, and was recently laid off as an IT worker.

According to King, Rasheed's family said that there was no indication that he was radicalized, and that they are just as shocked as everyone else to hear the FBI is investigating the 32-year-old for possible terrorism. They said this is not his regular character.

Rasheed was born in Houston, and there's nothing to indicate that the recent events in Afghanistan influenced him--King added.

King also said that Rasheed's family would like to extend their sincerest condolences to Lewis' family.

Rasheed's family is cooperating with the FBI's investigation, King added.

Timeline of events on Sunday

Lewis was shot and killed in the 400 block of Forest Gate Drive in Garland in an industrial area just before noon, according to Garland police. She was pronounced dead on the scene.

Officials said she and Rasheed did not know each other.

Later, while Garland police were investigating that shooting, they said they found the same Lyft car at the Plano Police Department, where Plano police said a man was "acting strange" before going inside the department.

Plano police said about 12:15 p.m. Sunday that Plano police officers were dispatched to an incident involving a man, who was later identified as Rasheed, acting erratically in front of the police headquarters.

Before officers arrived, police said Rasheed went inside the lobby and then left. He returned a few minutes later and had a handgun in his right hand, according to officials.

“When he came back in the second time, there was a civilian employee that was assisting a citizen in the lobby of the police department,” said Plano police spokesman Jerry Minton. “They obviously froze, trying to deescalate the situation.”

On police surveillance cameras, there appeared to be some conversation between the two, and then Rasheed raised the weapon and fired at the civilian employee, according to Minton. The employee and the visitor escaped into a secured interview room and were unharmed, Minton added.

According to officials, a detective and a police sergeant inside the building heard the shot and confronted Rasheed. They exchanged gunfire, hitting Rasheed, police said. He was taken to a nearby hospital but later died Monday.

“Things kind of appear what they are, but we still need to link them with evidence to be able to make that solid connection,” Garland police spokesman Matt Pesta Sunday when the departments were still trying to figure out if the two crimes were related. “It's just a sad deal all the way around. I mean, let's face it, a life was lost today. And there could have been many more if it wasn't for the heroic actions of Plano Police Department.”

The Plano Police Department said Sunday night its lobby area would be closed until further notice due to the shooting. Contact the department through its non-emergency phone number at 972-424-5678 or visit the stations at 4640 McDermott Road and 7501-A Independence Parkway.

If anyone has information regarding Rasheed and possible info that may help the FBI, visit this link.