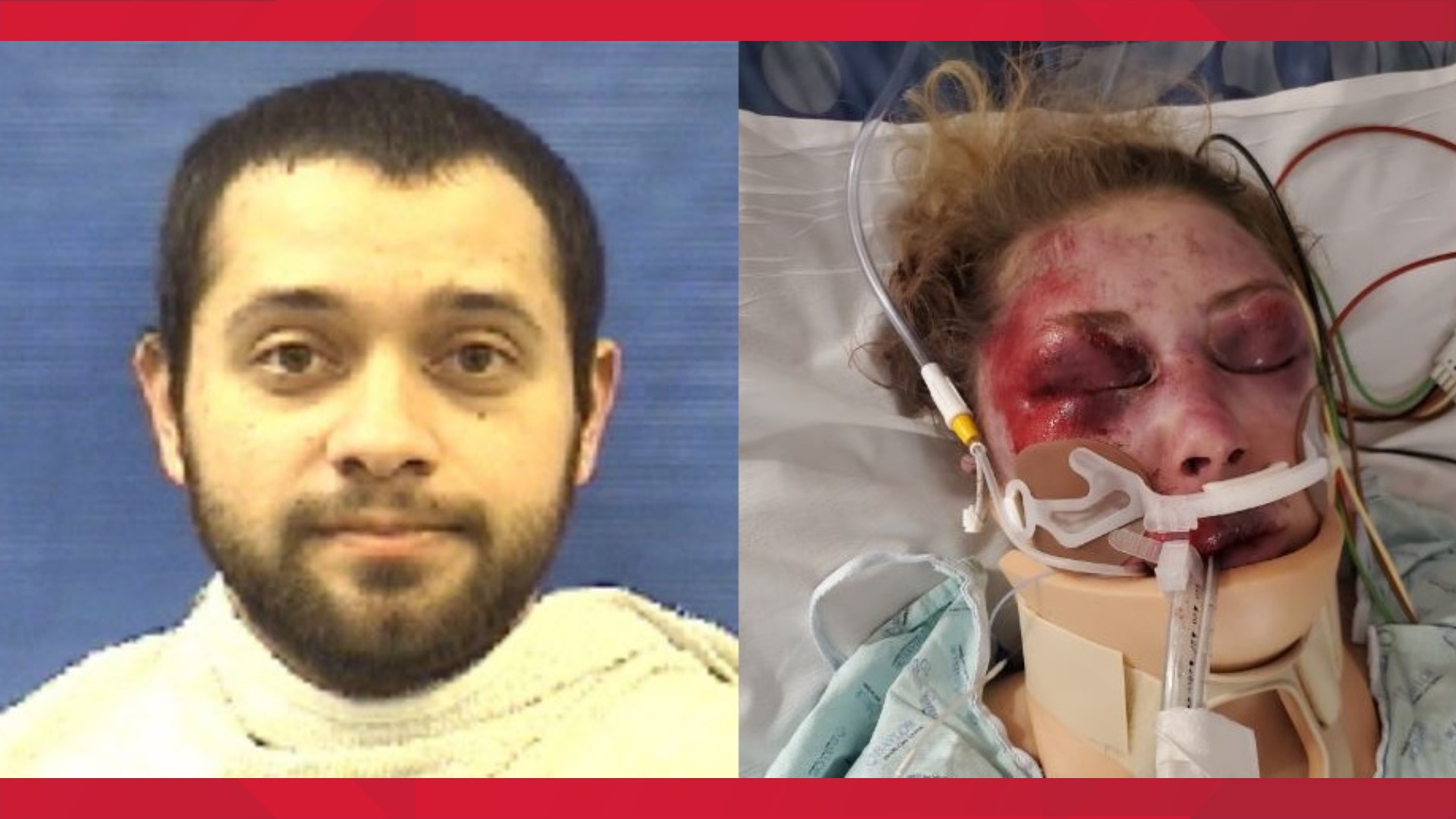 DALLAS, Texas — A 25-year-old man accused of beating a woman with a fire extinguisher in a parking garage at the Statler Hotel in downtown Dallas now faces a federal carjacking charge.

The charge comes one week after WFAA aired an exclusive interview with the victim, Jonna King, who was upset that her attacker was given low bonds following two arrests in connection to the crime.

David Cadena made his first appearance in federal court on Tuesday afternoon.

The federal charge was added after Cadena bonded out of the Dallas County jail twice since the attack in September, federal officials said.

Credit: King family
Photo of Jonna King in the hospital after the attack.

WFAA reported last Monday that Cadena's bond for his aggravated assault with a deadly weapon charge was set at $20,000 when police initially arrested him.

Defendants usually only pay 10 percent of their bond amount, so Cadena was able to make bail within a day.

Earlier this month, investigators added a robbery charge to the case and re-arrested Cadena.

This time, his bond was slightly raised to $25,000. Cadena was able to post bail within a few days.

A bond is not meant to be set as punishment. However, judges can take a defendant's criminal history into account and set a higher bond if they feel they are a threat to the public.

In 2014, Cadena pleaded guilty to two charges of aggravated assault with a deadly weapon out of Laredo.

A judge granted the request of prosecutors to detain Cadena after he waived his right to contest detention at a hearing.

"Violent criminals should not be released when they pose a danger to the community," Cox said in a written statement. "In this instance, a violent defendant was released not once, but twice, after posting minor bonds."

The stolen Toyota Corrolla was manufactured in Mississippi and shipped to Texas, giving federal authorities legal jurisdiction to file a charge through interstate and foreign commerce.

If convicted, Cadena faces a sentence of up to 25 years in federal prison.

Cadena is accused of using a fire extinguisher to attack 27-year-old Jonna King in the hotel's parking garage after 3:15 a.m. Sept. 21.

King was a waitress at the hotel and as she left work that night, police say Cadena approached her in a nearby parking garage on the lower level.

Credit: King family
Additional photo of King after the attack.

Cadena beat King and took her Toyota Corolla, which had her purse and phone inside, federal records show.

He then crashed the car in the parking garage, and Dallas Fire-Rescue was called to treat him. Authorities found King in the garage and transported her to the hospital, where she remained in a coma for two days, federal officials said.

King said she'd never seen Cadena or met him before. It's not clear why he may have singled her out.

"It's just weird that someone would look at a complete stranger and say, 'You. That's what I'm going to do.'"

King "suffered severe bruising and swelling to her face and head” and has nerve damage to her legs and arms, according to the federal complaint.

King told WFAA that she remembers waking up in the hospital and being unable to see. Her eyes were swollen shut.

"It was very frightening," King said. "They asked me what happened, and I had no idea why I was there."

Thankfully, King expects no serious long-term effects. However, over a month later she said that she's still having concussion-like symptoms.

King said she gets dizzy still, her right leg doesn't function as well as before, and that it's difficult for her to hold and write with a pen.

'My Family Can Now Relax'

King told WFAA from her home on Wednesday that she's relieved Cadena is currently being detained and facing a federal charge.

When doing her interview with WFAA, she wanted the judges who set Cadena's bonds to see her photos from recovery.

If she hadn't shared those pictures, she wonders if anything would have been done.

"They realized that they messed up and that they let a victim down," King said.

"I hope they take this as a challenge to do better for the future. The whole point was to make them understand that what they let happen or what they continue to let happen to other people is not ok."

Ironically, King and her husband both returned to work this week.

Credit: King family
King with her daughter after the attack.

They're resuming their lives finally after taking two months off due to the attack.

The time away, was mainly so King could recover and her husband needed to assist.

Turning the page and knowing that her attacker likely won't get out of jail until trial in the same week, was a reality she's been waiting for.

"My family can now relax knowing that he is put away."

RELATED: 'It was like being victimized more than once,' says beaten Statler employee after attacker made bail twice