After the storm: Is your home under-insured? 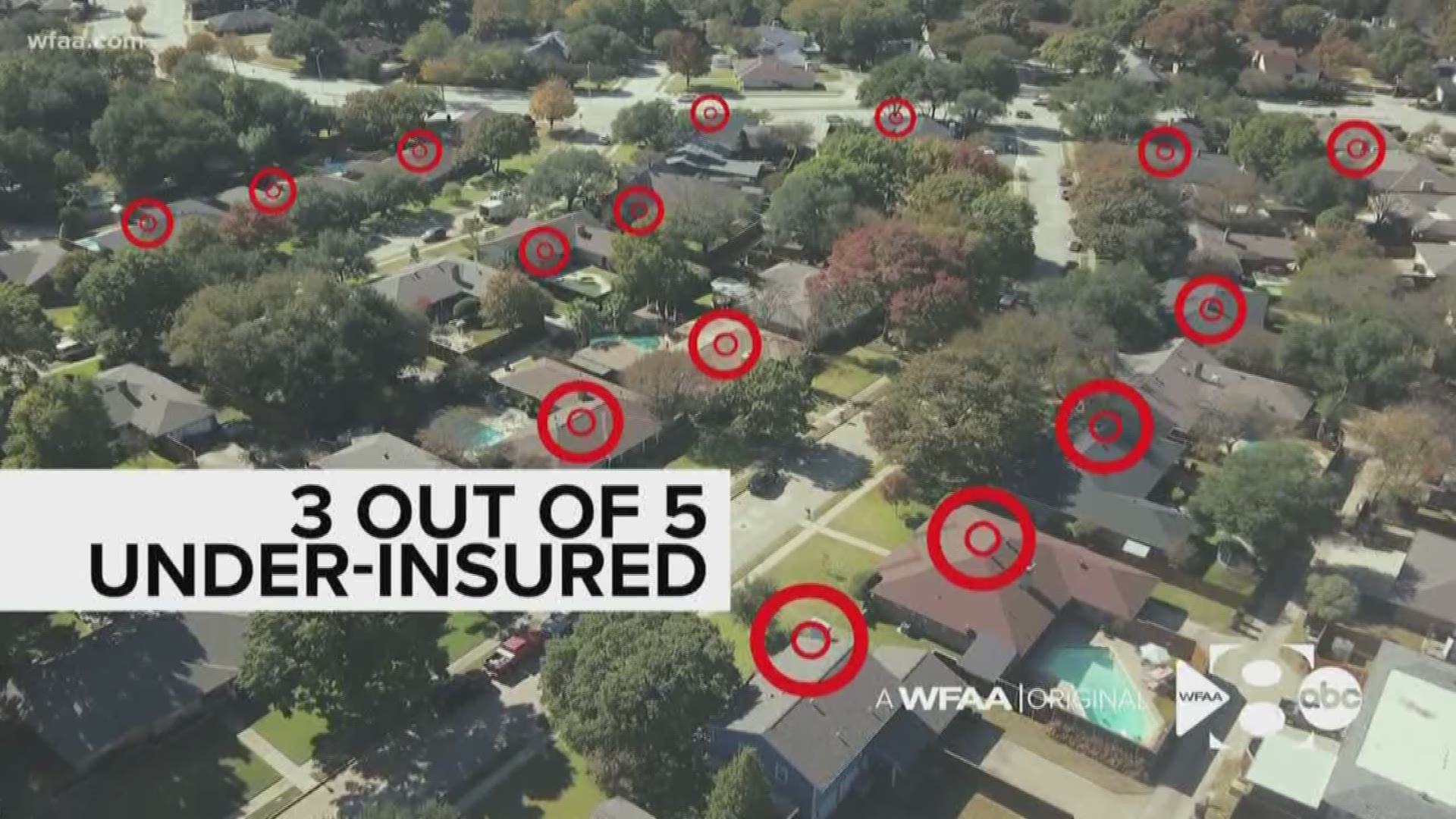 DALLAS — If there is one good thing to come out of the Sunday storms, it’s that all that damage might make us look at our homeowner’s insurance.

Multiple surveys by Marshall & Swift/Boeckh over the years have found that as many as 60% of homes are under-insured. Chances are your home costs more to replace than it did when you bought your insurance policy and stuffed it into a drawer.

“Insurance is not sexy. You want to put it on autopay and be done with it," Michael Turner of Classic Urban Homes said.

But he knows why you shouldn’t put your insurance on autopilot. We recently toured one of his custom home job sites.

He pointed to a pallet of limestone: “In ten years, the cost [of that] has doubled."

Just about every construction material he works with has gone up in price. We admired the wooden plank ceiling inside the home as he estimated, "for the kitchen and dining room area, that is probably a $1,500 increase...[over] five years."

We went into a room being painted, where Turner told us that roughly 10 years ago, the paint cost $5.

"Now that same gallon of enamel is probably $30.”

Then, there are the laborers. There’s a shortage of them, so they cost more, too.

“They are like free agents and can pretty much name their prices and what they want to make," Turner said.

In fact, Turner said just about every week, someone stops by one of his construction sites trying to poach his workers for their own construction projects.

To illustrate how much labor has gone up, Turner points back to the pallet of limestone that has doubled in price in the last decade. He says in roughly the same period of time, putting that stone on a house has gone up even more.

Turner said material and labor costs have been rising by about 10% a year. So if you haven’t increased your property insurance coverage in five years or more and you suffer tremendous damage, Turner said you may be able to rebuild half of your house.

He knows from experience. He ignored his own home insurance policy for almost a decade.

“I looked at it and said, 'There is no way we can rebuild this house, even me in the business with zero profit margin.' So we basically doubled our coverage on what we had."

According to Tony Daniels with Hippo Insurance, you should update your coverage every one to two years, and maybe more frequently if you have updated your home.

Daniels showed us a client’s home with granite countertops in the kitchen. “These countertops alone in this house are probably going to [add] between $4,500 and $5,000” to replace if they are part of a casualty claim, he said.

Daniels said it’s a great idea to walk through your home and record a video of all your possessions and major features of the home. That can be a tremendous help in a situation where there are many homes damaged and insurers are trying to sort out what was in each property.

He also advised that you spend a little extra and opt for replacement cost coverage for your things — not actual cash value.

“The actual cash value is only going to pay you the depreciated amount," he said.

You really need to know your coverage and what it means. You don’t want to just rely on your insurer, says Amy Bach of United Policyholders.

“All the commercials, we’re going to put you back to where you belong and you’re in good hands...they engender trust. And consumers believe it and don’t read the fine print. And even if they do, it’s so gobbeldy-gook and legalese," she said.

Her organization has a website full of insurance advice for homeowners, including help for homeowners needing to file a claim in Texas.

A few other entries of significance:

Bach says we have to get into the habit of vigorously questioning our home insurance coverage.

"I am going to say for most people it is about 25% that they are short," she said.

She has seen it time and time again with disaster survivors.

"And every one of them says, 'My gosh, I thought I had full coverage and if someone had told me I didn’t I would have done something about it because my home is my most valuable asset'…I am not going to put it at risk on purpose."

The stormy weekend was just a warning. Most of us didn’t suffer a total loss this time. If we had, many of us would’ve lost our homes and tens of thousands of dollars.