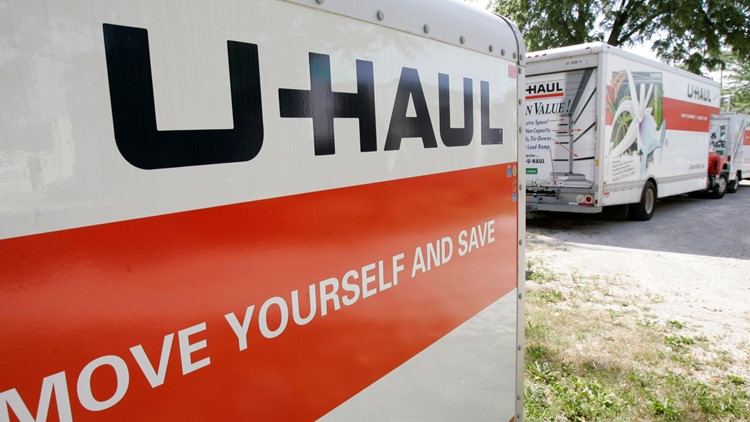 Photo by: ASSOCIATED PRESS
** FILE ** The U-Haul logo is shown on the side of a trailer on a dealer lot, June 14, 2006, in a Des Moines, Iowa file photo. U-Haul International parent Amerco Inc. releases second-quarter earnings after the bell. (AP Photo/Charlie Neibergall, File)

The Lone Star State has lost its No. 1 title on U-Haul's annual ranking of the hottest states for where people are moving.

Florida topped Texas in terms of the largest ratio of U-Haul trucks entering the state versus leaving them, according to U-Haul.

Texas had held the list's top spot for three years.

U-Haul collects migration data from more than 2 million one-way truck trips every year to determine the country's top "growth states." U-Haul looked at data from the 2019 calendar year for 49 states and the District of Columbia. Hawaii was excluded from the list.

U-Haul migration trends don't directly correlate to a state's population or economic growth. But the company says its ranking is "an effective gauge of how well cities and states are attracting and maintaining residents," which can tell businesses where corporate players or the labor force are headed.

Arrivals accounted for 50.4% of all one-way U-Haul traffic for Texas — although both arrivals and departures in Texas were down 2% compared with 2018. U-Haul doesn't offer data on in-town round-trip bookings or the raw number of rentals.

McKinney, along with Round Rock-Pflugerville, New Braunfels, The Woodlands-Spring, and Austin, were among the markets led the way for the state's gains, U-Haul said.

"People know they can find a job in Texas and make it their long-term home," said U-Haul Company of South Austin President Glenn Taylor in a prepared statement.

After Florida and Texas, the top five was rounded out by North Carolina, South Carolina, and Washington.

Illinois ranked last, as it did in the 2018 ranking. California, which has seen a number of companies relocate to Texas, came in 49th. The bottom-five was rounded out by Michigan, Massachusetts, and Pennsylvania.