Still having trouble filing an unemployment claim? Here are some new tips to help you get through the process 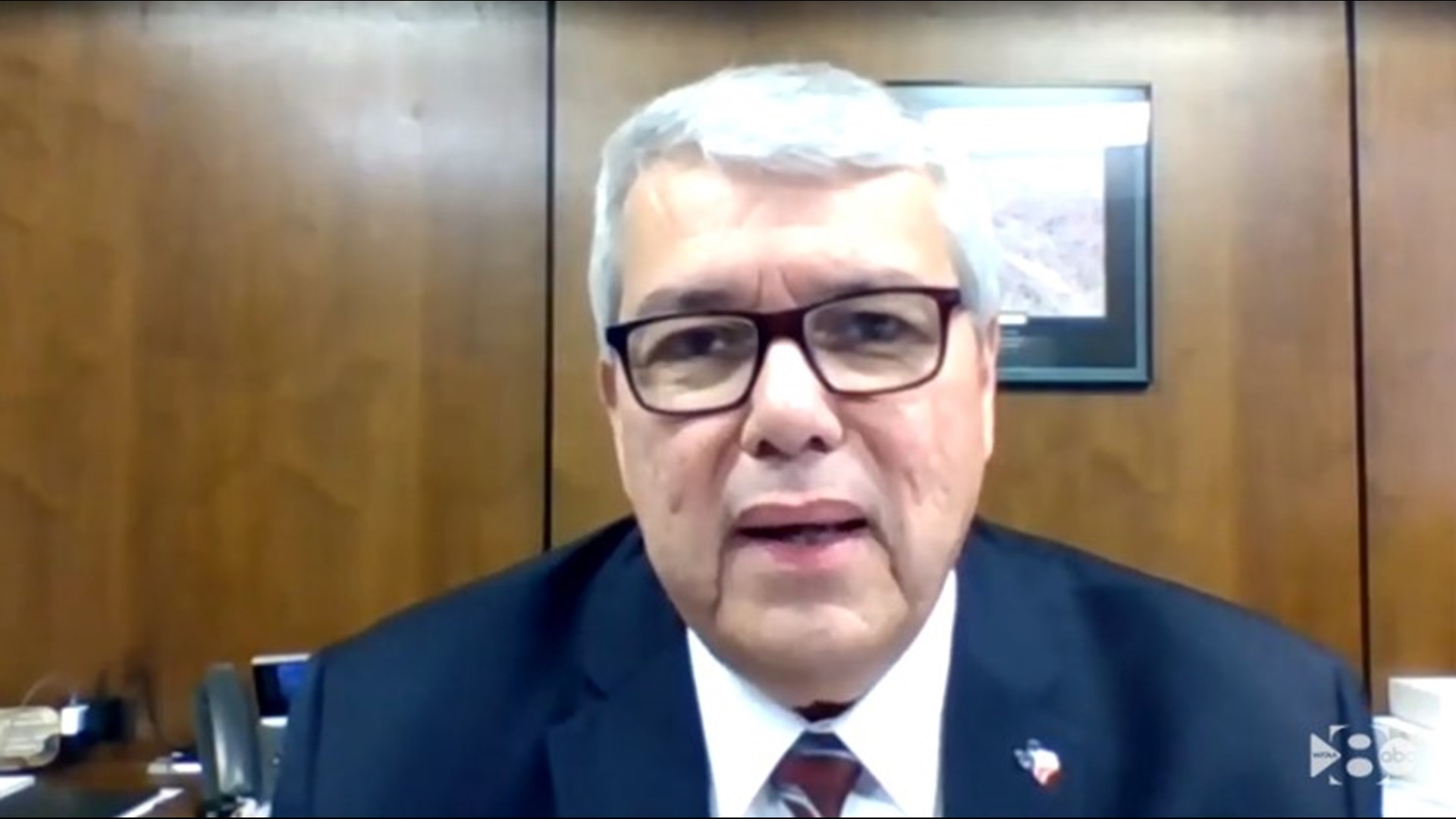 Another 280,000 Texans filed for unemployment last week -- an increase from the week before, when there had been a dip in the numbers.

Texas Workforce Commission officials say they had been “cautiously pessimistic” when numbers dipped the week before, thinking it may have been due to the long Easter weekend.

In a little more than a month, 1.3 million people in this state have filed jobless claims.

TWC now reports that more than 95% of those who have successfully signed up for benefits have done so online.

The phone lines are still a big part of the story, though.

While the agency has added hundreds of call takers, staff, doubled its call center operations from four centers to eight and has expanded call hours, many Texans who need to call in to file or get information have been unable to reach the unemployment office, because lines have been jammed for weeks.

With that backdrop, Serna answered WFAA’s questions for half an hour Thursday. That is the longest talk with him since the economic crisis caused by COVID-19 began.

Watch the full interview below:

Here are the highlights

Serna says many of the largest volumes of calls are coming from several different buckets and that many of those callers really don’t need to spend their days dialing in.

Bucket one: People who are ‘just nervous’.

Serna says these are people whose claims have been filed and have received notification that everything is good to go; and they can start requesting payments.

Serna says they can see the number of times a repeat caller has phoned in, even if they don’t get through. He says one man had called 1,000 times. The TWC called him back to ask what his inquiry was, and the man told them he was just nervous and wanted to make sure everything was okay with his claim, even though his correspondence with the agency had confirmed it was okay.

There have been a number of people who thought everything was okay with their claims and had gotten to the point of requesting a payment, and then two weeks later they had requested another payment -- yet no payments have arrived.

“When you request payment, it may take anywhere between 14 to 21 days. We are shooting for less than 14 days, but 14 to 21 days for there to be a direct deposit or debt card. If you requested it a week ago and are not seeing anything, it could be that it is still just working its way through the process,” explained Serna.

Bucket two: Independent contractors, self-employed, and gig workers who are all newly eligible for unemployment benefits under the Pandemic Unemployment Assistance (PUA).

Serna says many people in this category are calling in because they are unfamiliar with the process.

In many cases, people in this group have been told they are ineligible or have an estimated $0 benefit. Serna says that is because of paperwork processing issues and that his staffers are also aware of all the people in this group. They are now “auto-filing claims” for some of them and reaching out to communicate with others, to let them know what more they need to do.

One big stumbling block has been that certain tax forms are needed for people in this group, so that their wages can be estimated. However, because the IRS extended the filing deadline, many have not yet filed their taxes.

“Don’t worry. What we are going to do is set you up. When you get through and complete your claim, we are going to set you up for the minimum… $207 per week (in state benefits) plus the $600 per week (in federal benefits), and when you complete your tax return with all the schedules, contact us, send it to us and we will readjust the minimum (of state benefits) you have been getting,” Serna said about those in that predicament.

Prior guidance from the TWC indicated the following is where you can send that paperwork:

Many people who have picked up odd jobs or gig work after losing their jobs have asked if they can still file for unemployment. Serna says you can still file for benefits. When you are asked in the application process whether you have worked since losing your job, the application is asking specifically if you have worked at the job for which you are claiming benefits. It's not asking about current gig work, for example. But Serna cautions that when you go in to request payments, current income from any work you are doing will lead to a reduction in your state benefit amount. He says if you are also getting the federal benefit of $600 per week, (again, for example from a gig job you have taken to try to earn a little money right now), current wages will not reduce that amount. It is imperative that applicants be honest about any wages they are earning, because Serna says the TWC will eventually find out about those wages even if you do not claim them, and then you will be required to pay back some of your benefits to the agency.

Bucket three: Filers who previously drew benefits years ago, and no longer remember their username/password/PIN combination and have been unable to access the site online.

Serna says accounts created before about 2016 have been wiped clean now. Serna says essentially that means those filers should be able to, “Go the site and try again… It is like you are starting fresh again,” by creating an identity on the site before filling out applications.

He also says the agency is aware of people whose username/password/PIN issues haven’t resolved.

“We know who is kind of bumping into that, and we have a whole other group of people that have just started making calls out at various times of the day,” Serna said. Those people will reach out and get their accounts reset.

Bucket four: People wanting to know when TWC will start applying the additional 13 weeks of unemployment benefits beyond what the state offers.

“Sometime in the next couple of weeks we will have all the coding changes made. That is another group of people that we know who those individuals are in that population, and we are going to be proactive, and we are going to be reaching out to them with some message that says here’s what you need to do -- here’s what’s going to happen. And we are going to take you back to the date that your benefits expired and get you caught up, and it will include the $600 (per week federal benefit). Now, the $600 only goes back to the week of April 4, because that’s when the CARES Act came into effect,” Serna said.

So, by the first week of May, he says those benefits will be ready to be applied to people in the TWC system.

TWC has previously said it will scan people in its system going all the way back to the summer of 2019, to see if they are eligible for the additional weeks of unemployment provided by the federal funds.

And for perspective, Serna added, “I know this doesn’t sound like a consolation to the people waiting for benefits or concerned about their benefits expiring, but I am very proud to say that Texas is one of only a small handful of states actually paying out benefits to people who are self-employed or contract employees… paying the $600 (in federal benefits). And we are trying to be one of the first states paying the 13 weeks also.”

Serna warns filers who have grown impatient not to fall for what look like quick fixes on social media. He says he has seen posts on Facebook that offer a generic unemployment application that, once you fill it out, the provider can pass along to any unemployment office in the country.

Serna has two warnings about that, “You are giving a lot of confidential information to someone you don’t know. They may or may not mail it to us and even if they do, we can’t do anything with it.”

Serna also cautions that anyone who calls from the TWC has your information in front of them already.

He said some of the TWC staffers will have blocked or unavailable phone numbers show on your caller ID, because of the sites from which they are calling. But he stresses, they should already know your information. And he says if you are uncomfortable with the caller for any reason, you should call them back -- even if that means wading through the busy signals.

Serna says he understands the frustration of people applying for benefits. He says about 10% of callers who get through are verbally “abusive” or go on “rants.”

“We have a very old system that was built back in the 90’s. We were just completing the negotiation phase to begin contracts to replace the system -- about a two to three-year project. And we had to stop all that because of this. So, we are working with an old system that was never designed for this kind of volume,” Serna said.

Indeed, TWC has processed nearly twice the number of claims from all of 2019 in just about one month.

Where to from here?

WFAA asked Serna what happens if jobless claims slow down, the economy starts to normalize, and then there is another serious outbreak of COVID-19 that causes big job losses in Texas.

He says staffers who have been shifted to the application process will be key.

“We are going to keep those people trained and have a sort of reserve army if you will. So, if this starts happening again, we will immediately call them up. And we are going to try keep on contract, though not an active contract but on retainer at those call centers, so we can spin them up even quicker.”

The call centers he refers to, are the additional four call centers that have been staffed to handle TWC’s existing four.

What about funding? Does TWC have enough?

Serna acknowledges, the agency is quickly burning through the trust fund it uses to pay benefits.

“Let me assure everybody you will get a benefit. It is not going to be a reduced benefit because we have run out of money. It will be the benefit you deserve, the benefit you have earned, plus the pandemic extra funds. If our trust fund, it will get completely depleted. We can borrow interest-free from the federal government, and we have already put in requests for at least two installments, so we can have the money coming in before we ever run out of funds, and we will just do that as much as we need to. And then we can work with the federal government the long-term repayment of that,” he said.